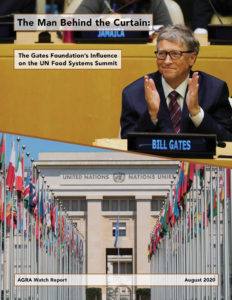 Today AGRA Watch presents a new research report, “The Man Behind the Curtain: The Gates Foundation’s Influence on the UN Food Systems Summit”.

In December 2019, Agnes Kalibata, president of the Alliance for a Green Revolution in Africa (AGRA), was appointed as Special Envoy to the 2021 UN Food Systems Summit by the Secretary General of the United Nations. Following this event, 176 civil society organizations (including CAGJ/AGRA Watch) and farmer groups from 83 countries sent an open letter to the UN Secretary General António Guterres to withdraw the appointment of Kalibata due to her close ties to corporate actors. This letter was followed up by a second statement signed by over 500 organizations, academics, and social movements, raising concerns about both this nomination, and about the overall approach of the Summit.

In response to the two civil society letters, (only) twelve individuals representing several development banks, academic institutions, and the private sector, sent a letter to the UN Secretary General to support Kalibata’s nomination to this position.

AGRA Watch researched these individuals, and found that all but one have received funds from the Gates Foundation. In the report we discuss the ties, and implications of the Gates Foundation and Bill Gates’s growing influence, which is often difficult to track. 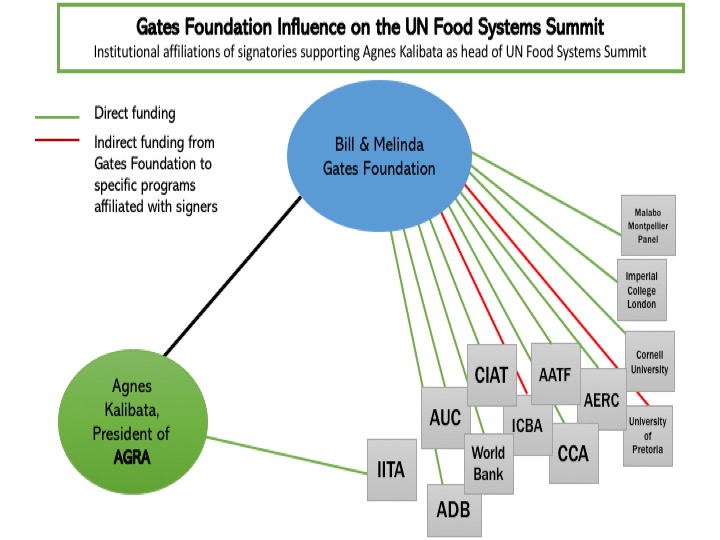 Many thanks to the contributors to the report, including Aya Wallaia, AGRA Watch Intern; Matt Canfield, AGRA Watch Member; and Heather Day, CAGJ Executive Director. In addition, we would like to acknowledge Rob Day, for assistance with translation to French, and Becca Fogel for graphic design.

We also gratefully acknowledge the support of Swift Foundation.