Thank you to everyone who helped make our WTO+20 celebrations possible! Check out our full Report-Back here.

CAGJ is excited to join WA Fair Trade Coalition, UFCW 21, Town Hall Seattle, MOHAI and others in marking the 20th anniversary of the World Trade Organization protests! Please check back for updates!

Email CAGJ if you have events you want to add. 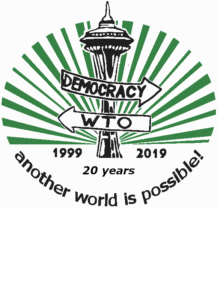 Join us for a screening of the documentary “THIS IS WHAT DEMOCRACY LOOKS LIKE” to learn what the 1999 Battle in Seattle was about, and what it means to all of us today. Film followed by discussion with the filmmaker Jill Freidberg, along with State Senator Bob Hasegawa and Rosalinda Aguirre. Sponsored by WA Fair Trade Coalition. For more info, contact Hillary: hillary@washingtonfairtrade.org

Crosscut Talks Live – WTO: Did Everyone Lose the Battle of Seattle?

Twenty years ago this November, the world’s attention turned to Seattle where a meeting of the World Trade Organization was disrupted by thousands of protesters who filled the city’s streets. The conflict that followed shook Seattle and laid bare deep frustrations with the excesses of globalization and fears about the impact of free trade.

While it failed to stop the WTO, the three days of conflict did renew the power of grassroots political protest in the U.S. It set the course for Occupy Wall Street and other populist movements, and helped to shape the dialogue around economic equity in the 21st century.

Joined by prominent figures from the events, historians and today’s political analysts, we look back at the WTO with the benefit of hindsight to revisit those dramatic days, and to consider what the protests, responses and anxieties of those times may have foretold about our economic and political reality today.

Thousands of people took to Seattle’s streets to protest the World Trade Organization (WTO) conference in 1999. Memorialized as an isolated event, this simplified narrative erases significant contributions of activists of color by ignoring the years of international organizing that made it possible.Hear from activists who participated in the WTO protests as they share their reflections on how this protest is remembered and its continuing impact on local activism today. Moderated by Heather Day, panelists include Cindy Domingo and Jill Freidberg. For disability accommodations, please contact programs@mohai.org two weeks prior to the event. For more info, please contact Rachel: Rachel.Spence@mohai.org

History Café: Remembering the WTO 20 Years Later is presented in partnership with the Community Alliance for Global Justice. Share the Facebook Event.

Today in Seattle, and around the world, social movements are taking to the streets, striking, locking down, and engaging in multiple forms of direct action. These tactics build collective power to transform the intersecting crises of our times into opportunities for equity, healing, and sustainability. In 1919 over 65,000 workers with held their labor during the Seattle General Strike; in 1999 over 50,000 people took to the streets of Seattle, and shut down the World Trade Organization’s conference. In 2019 we gather to honor this history, and the power of non-violent direct action, through story-telling, trainings, and movement-building workshops, to make another world possible.

Activists who were part of the mobilization will share stories and lessons learned from the people’s movement which made history by successfully preventing the WTO – one of capitalism’s most powerful global institutions – from further consolidating its power. And we will hear from leaders of today’s movements for justice, from Washington farmworkers to global alliances. Join the WTO+20 gathering for hands-on direct action training, arts workshops, story-telling, and opportunities to plug into local organizing! Let’s inspire action to change the world!

Paul Cheoketen Wagner, Founder of Protectors of the Salish Sea

Lisa Fithian, Author of Shut It Down: Stories from a Fierce, Loving Resistance

This Is What History Looks Like: Archival Footage from the 1999 WTO Protests

Location: NW Film Forum 1515 12th Ave, Seattle, 98122. In honor of the 20th Anniversary of the WTO protests in Seattle, Moving Image Preservation of Puget Sound (MIPoPS) and Jill Freidberg invite you to join them for a retrospective exhibit and video presentation. In November 1999, tens of thousands of people filled Seattle’s streets to protest the World Trade Organization. For an entire week, the whole world watched as grassroots activists, labor, environmentalists, farmers, anarchists, and artists made history. Throughout that week, a new organization, Seattle Independent Media Center (IMC) collected and logged 300 hours of video footage, shot by over 100 independent videographers who had come to Seattle to document the marches, direct action, teach-ins, rallies, and coalition-building that defined that week. IMC co-founder and Seattle filmmaker, Jill Freidberg, became the caretaker of that video collection, storing crates of Betacam SP videotapes in her home for the past 20 years. 4Culture recently provided a grant to digitize 40 hours from that collection, as the first step in a long-term strategy for preserving and creating access to an archive of independent videotape footage from the 1999 WTO protests through University of Washington Libraries, Special Collections. Hidden until now, the archive offers King County residents a unique glimpse into a historic moment that shaped social justice movements in the region and around the world. This event will include excerpts from the IMC video archive, along with an exhibit of archival ephemera from the Labor Archives of Washington (University of Washington Libraries, Special Collections). Purchase Tickets ($7 – $13). More info.

Commemorate the 20 year anniversary since the people Shut it Down!

GUERRILLA VIDEO PROJECTIONS: Celebrate our history with giant projections of photos and video from the WTO shutdown and the arts that were at the center of it.

Filmmaker Jill Freidberg (“This is What Democracy Looks Like”) will project excerpts from the 400 hours of footage that independent videographers shared with the Independent Media Center during that historic week in 1999.

Arts organizer David Solnit of Shutdown WTO Organizers’ History Project will show images of the arts from the shutdown.

MUSIC: Singer-songwriter Jim Page will share a few songs and lead us in singing together, Shut It Down Didn’t We

This month marks 20 years since a people’s uprising shut down the World Trade Organization in Seattle. Come celebrate with us!

FEATURING:
*DJ Megabooty and TOPSPIN
*Projections of WTO protest footage that has recently been unearthed from a 400-hour collection

In 1999, more than 50,000 of us marched in Seattle against corporate-centric globalization spearheaded by the World Trade Organization (WTO). We demanded a more just economy, that puts people before profits – and we caught the imagination of people around the world. Twenty years later, the struggle continues for genuinely fair trade that puts people and the planet first. Join us Dec 7!

10 AM Rally at Occidental Park: Speakers, street theater, music, and a short march to the Federal Building.

7 PM Keynote with Joseph Stiglitz and Action Orientation with Lori Wallach. Wallach is Director and Founder of Global Trade Watch, a division of Public Citizen. Joseph Stiglitz is a Nobel laureate in economics, Professor at Columbia University, and chief economist of the Roosevelt Institute. His latest book is Globalization and Its Discontents Revisited: Anti-Globalization in the Era of Trump. Stiglitz will describe a better way forward – an approach to globalization that balances interests of workers, communities, and the environment with business interests. General admission for the keynote is $20. A limited number of free tickets are available first-come-first-serve: Register for FREE & $20 tickets. Contact Hillary for more information:

In this interactive session, we’ll discuss the food and farm system we want and how corporate-led free trade agreements create obstacles to it in the U.S. and around the world. Led by Heather Day, Executive Director of the Community Alliance for Global Justice and Karen Hansen-Kuhn, Program Director at the Institute for Agriculture and Trade Policy, Karen has been working on trade and economic justice since the NAFTA debate, focusing especially on bringing developing country perspectives into policy debates on trade, food security and economic policy.