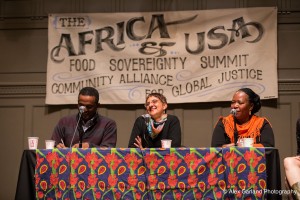 The goal of the Summit was to deepen cooperation and develop a shared analysis of current public and private interventions in African agriculture, most notably by the Bill and Melinda Gates Foundation. See here for media about the Africa-US Food Sovereignty Strategy Summit.

During the meetings AGRA Watch provided a summary of our research examining the Gates Foundation’s agricultural development programs, including the Alliance for a Green Revolution in Afric (AGRA). African and US-based organizations shared the context of their work, the challenges they face, and the strategies they have adopted to resist corporate interventions and build resilient, agro-ecological agriculture and food sovereign communities.

Near the end of deliberations the organizations attending the Summit adopted a joint statement representing a commitment to working together as well as some concrete ideas for campaigns and work moving forward. Read the statement.

In addition to the four-day meetings, African participants were featured in a large public event held at Town Hall on Sunday, October 12, which included a reception, panel discussion and Q & A. The event, The Global Struggle for Food Sovereignty: A Discussion with African Food Leaders and Farmers drew an audience of over 400. The event created an opportunity for community members to interact with and hear from the Summit participants, and raised public awareness of the problems with the Gates Foundation’s intervention in African agriculture. See pictures and video of the event.

On the last day of the Summit, participants toured local urban and rural farms in the greater Seattle area as part of the Food Sovereignty Farm Tour. Our guests learned about the local food community while sharing ideas and making connections.

Moving Forward from the Summit- Tackling the GM Banana
As a result of the Summit, we recently have begun a joint struggle against the genetically engineered banana. The Gates Foundation has sunk $15 million into a “super banana” supposedly to improve levels of Vitamin A. But this techno-fix will simply flood the Ugandan market with GMOs and destroy the many heritage varietals of bananas that are central to Ugandan culture. Over 120 organizations sent an Open Letter to the Gates Foundation opposing the feeding trials. Recently, CAGJ authors were published in Third World Resurgence with an article about the ‘Super Banana’. Read more about our campaign here.