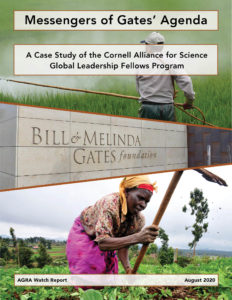 The AGRA Watch program of Community Alliance for Global Justice is pleased to present a new report, “Messengers of Gates’ Agenda: A Case Study of the Cornell Alliance for Science Global Leadership Fellows Program”. The study exposes how the Bill and Melinda Gates Foundation uses the cover of an institution of higher education to spread its propaganda favoring industrial agriculture, GMOs, and the global food marketplace.

AGRA Watch examines a lesser-known aspect of BMGF’s overall strategy: framing the debates on food and agriculture policies and shaping how such issues are communicated. The Cornell Alliance for Science (CAS), funded by the Gates Foundation, uses its affiliation with Cornell University to claim scientific neutrality while assiduously promoting communications aligned with agribusiness through its use of Fellows, especially those from Africa. The report dissects the strategies of the CAS Fellows to discredit agroecology, and how the Gates Foundation fosters a new generation of leadership to carry forward its ideology and mission.

In taking a deeper look at the CAS Fellowship Program and the types of messaging it propagates, AGRA Watch exposes the pernicious methods used by the Gates Foundation to influence the communications, narratives and policies regarding agricultural development in Africa and beyond. A Case Study in this report indicates with specificity how these factors operate, and can serve as a model for investigating how other Fellows are propagating the Gates agenda after leaving Cornell and occupying prominent positions in their native countries.

AGRA Watch is a campaign of the Community Alliance for Global Justice, a Seattle-based organization founded in 2001 dedicated to strengthening the global food sovereignty movement through popular education and mobilization.  AGRA Watch was founded in 2008 to challenge the dominant ag/food development ideology for Africa pushed by governments, corporations, and philanthropic bodies, especially the Bill and Melinda Gates Foundation. Community Alliance for Global Justice is proud to be ally member of Alliance for Food Sovereignty in Africa.