Battle for Future of Food in Africa: 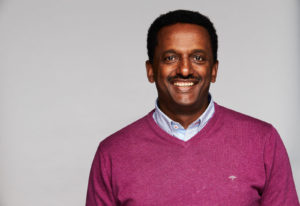 SEATTLE, WA October 25, 2019 – Wednesday, October 30th, Million Belay, Ethiopian expert on indigenous livelihoods, food and seed sovereignty, and author Timothy A. Wise will be in Seattle to share their knowledge about agricultural development in Africa. Before engaging in an evening discussion at Town Hall Seattle on climate change, farmers, and the future food, Belay and Wise will make a stop at the headquarters of the Bill & Melinda Gates Foundation, the world’s largest private foundation and biggest funder of biotechnology programs in Africa. Activists with Seattle-based grassroots food justice organization, Community Alliance for Global Justice (CAGJ) will join them. The evening event is co-hosted by CAGJ and Town Hall Seattle.

7:30-9pm: Eating Tomorrow: The Battle for the Future of Food in Africa, A Conversation Between Million Belay & Timothy A. Wise

Million Belay is the Coordinator of the Alliance for Food Sovereignty in Africa (AFSA), whose members represent small holder farmers, pastoralists, hunter/gatherers, indigenous peoples, citizens and environmentalists from Africa. He founded the indigenous organization MELCA-Ethiopia to promote agro-ecology and improve the livelihoods of local communities. Timothy A. Wise is a Senior Researcher at the Small Planet Institute and Tufts University and the author of Eating Tomorrow: Agribusiness, Family Farmers, and the Battle for the Future of Food (New Press 2019). Together, they will speak about the impacts of climate change on small-scale farmers across Africa, and present solutions coming from African farmers’ experiences on the land, including agro-ecological agriculture as a viable alternative to fossil-fuel-intensive farming.

“Climate change continues to impact small-scale farmers across Africa with rising temperatures, severe droughts, and devastating storms,” says Wise. “Yet international donors, such as the Gates Foundation and their Alliance for a Green Revolution in Africa (AGRA), continue to promote expensive agricultural policies that have done little to increase food production or reduce the vulnerability of farmers to climate shocks.” Gates has poured millions of dollars into AGRA since 2006 with the ambitious goal of doubling productivity and incomes for 30 million African farm families by 2020. In his book, Wise documents the failures of AGRA to come anywhere close to that goal, and how the heavy use of commercial seeds and fossil-fuel intensive fertilizers may be making farmers even more vulnerable.

CAGJ members will join Belay and Wise at the Gates Foundation headquarters to call attention to the failures of the new “green revolution” for Africa, and lift up the evidence that ecological agriculture reduces farmers’ costs and does not create dependence on agro-chemicals, hybrid seeds, and the corporations behind them. “Agroecology is giving farmers the kinds of innovation they need, farming with nature to promote the soil-building practices that “agricultural modernization” often undermines,” writes Belay. AFSA launched a campaign this year under the banner “Agroecology for Climate Action.”

At Town Hall, Belay and Wise will engage in a conversation drawing from a rich new set of case studies of agroecology by AFSA and on analysis from the new book, Eating Tomorrow, which features stories of the victims of land-grabbing in Mozambique, and Malawian farmers trying to preserve and promote their nutritious native seeds. We invite media to attend these events to learn more about the climate and agricultural issues facing small-scale farmers in Africa and the connection to these issues here in Seattle and the US (such as storms and flooding). This is an opportunity to hear directly from one of the most prominent African leaders in the food sovereignty movement and learn from field research that African farmers have the solutions that their governments should be pursuing: soil-restoring ecological agriculture and more diverse and healthy food crops adapts farms to a rapidly changing climate.