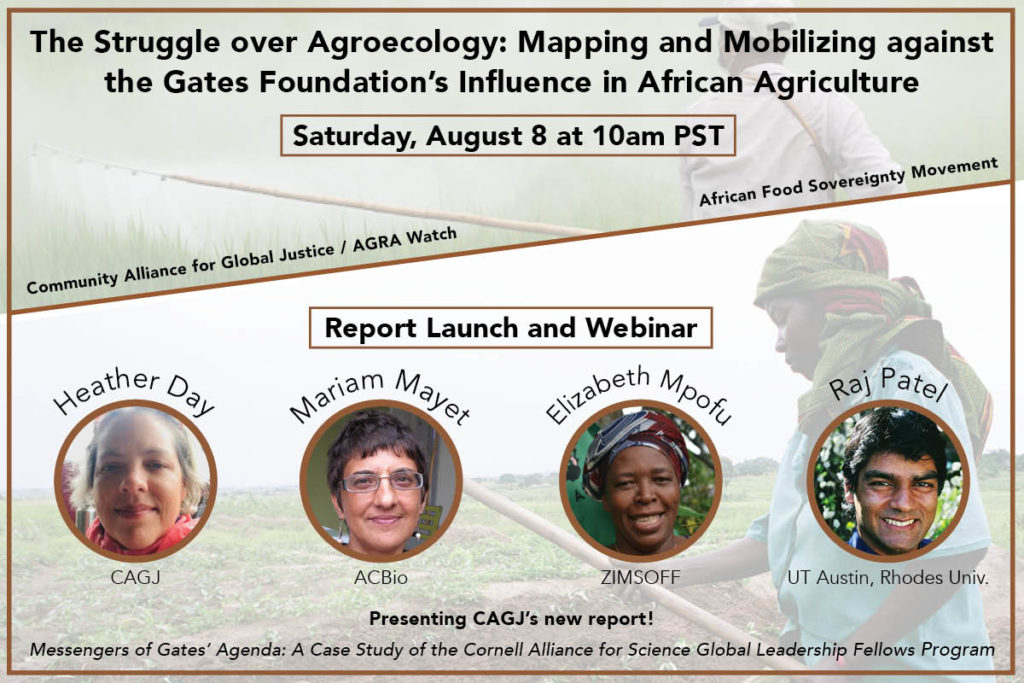 Registration is required: click here.  The Zoom link will be emailed the day before the event.

The Struggle over Agroecology: Mapping and Mobilizing against the Gates Foundation’s Influence in African Agriculture

Join us as CAGJ’s AGRA Watch campaign presents our new publication, “Messengers of Gates’ Agenda: A Study of the Cornell Alliance for Science Global Leadership Fellows Program.” Since 2006, the Bill and Melinda Gates Foundation (BMGF) has emerged as an extremely influential actor in an ever-intensifying battle over the future of food and agriculture. While the Foundation’s funding for industrial agriculture has been closely scrutinized, its public relations efforts to frame the debates and shape how issues are communicated through a cadre of “science-based” communicators has received less attention. This report examines how the Gates Foundation seeks to assert influence in debates over biotechnology through the Cornell Alliance for Science (CAS). Funded by BMGF, CAS uses its affiliation with the only ivy league institution that is a land-grant college to claim scientific neutrality while assiduously promoting communications aligned with agribusiness in its use of fellows, especially those from Africa. The report dissects the strategies of the Cornell Alliance for Science’s fellows to discredit agroecology, and how the Gates Foundation supports these fellows through its networks of funding. Panelists will contextualize the research in the broader struggle for Food Sovereignty in Africa.

Mariam Mayet is the founder and Executive Director of the African Centre for Biodiversity (ACB). She holds BA LLB and LLM degrees from the University of the Witwatersrand, Johannesburg, South Africa. Under Mariam’s leadership, the ACB has produced a respected record of evidence-based work and plays a vital role in food sovereignty struggles on the African continent. In 2014, Mariam participated in the Africa-US Food Sovereignty Summit hosted by CAGJ/AGRA Watch in Seattle.

Elizabeth Mpofu is a small-scale organic farmer, writer and activist based in Zimbabwe. She is the founder and former chairperson of ZIMSOFF (Zimbabwe Smallholder Organic Farmers Forum). She is also the General Coordinator of Via Campesina, a coalition of 164 organizations in 73 countries around the world, representing about 200 million peasant, landless, indigenous, and other farmers. She is co-founder of the African Women Collaborative for Healthy Food Systems. In 2016 she was Special Ambassador to the Food and Agriculture Organization of the United Nations (FAO) for the International Year of Pulses.  In 2014, Elizabeth participated in the Africa-US Food Sovereignty Summit hosted by CAGJ/AGRA Watch in Seattle.

Raj Patel is an award-winning writer, activist, and academic. Kenyan-Fijian and British raised, Raj once worked for the World Bank, World Trade Organization, and the United Nations. He has since been tear-gassed on four different continents for protesting against their global economic policies. He is a Research Professor in the Lyndon B. Johnson School of Public Affairs at the University of Texas at Austin and a Senior Research Associate at the Unit for the Humanities at Rhodes University, South Africa. He is the author of several books including Stuffed and Starved: The Hidden Battle for the World Food System and The Value of Nothing: How to Reshape Market Society and Redefine Democracy. He has testified about the causes of the global food crisis to the US House Financial Services Committee, and was Advisor to the UN Special Rapporteur on the Right to Food.

Heather Day is co-founder and Executive Director of Community Alliance for Global Justice. Heather co-founded CAGJ with others who helped organize the 1999 WTO protests and were inspired to build a membership based, multisectoral organization for global justice in Seattle. Heather holds a BA in Political Economy and Social Change from The Evergreen State College and a Masters in Geography from the University of Washington; her research focused on how the Free Trade Areas of the Americas was defeated by activists collaborating transnationally in the Hemispheric Social Alliance.