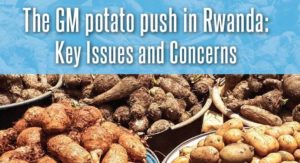 Due to the devastating impacts of late blight which has caused Rwandan Farmers a tremendous decrease in yields, an increase in the use of fungicides, and resistance to the fungicides, there has been a push for genetically-modified (GM) crops in Rwanda.

The International Potato Centre, which has received consistent funding from the Bill & Melinda Gates Foundation, and United States Agency for International Development (USAID) were involved in the Ugandan GM potato trials, and seem to be key to pushing the GM potato in Rwanda, given their significant presence in the country and investments in the potato value chain.

The GM push has raised concerns from civil society over the potential risks associated with this solution, and raises speculation in the solution’s promise to reduce potato vulnerability to late blight, citing briefing paper published by the African Centre of Biodiversity (ACB), and Participatory Ecological Land Use Management (PELUM) Rwanda.

Johnson Mwebaze, from PELUM comments, “We are very concerned about the lack of participatory stakeholder engagement with farmers and consumers and the limited information available on the long-term consequences of patenting of genetic constructs, as well as the proprietary issues concerning the GM seed and benefit-sharing agreements.” Along with the issues highlighted above, there is concern that the GM technology will develop resistance to late blight with time, making it only a short term solution. The corporate agricultural interest of the GM potato push will force Rwandan farmers to pay high costs, and neglects the significance of smallholder farmers in the seed and food supply chain.