CAGJ is so grateful to everyone who made our WTO+20 Celebrations possible, including all of the participants! 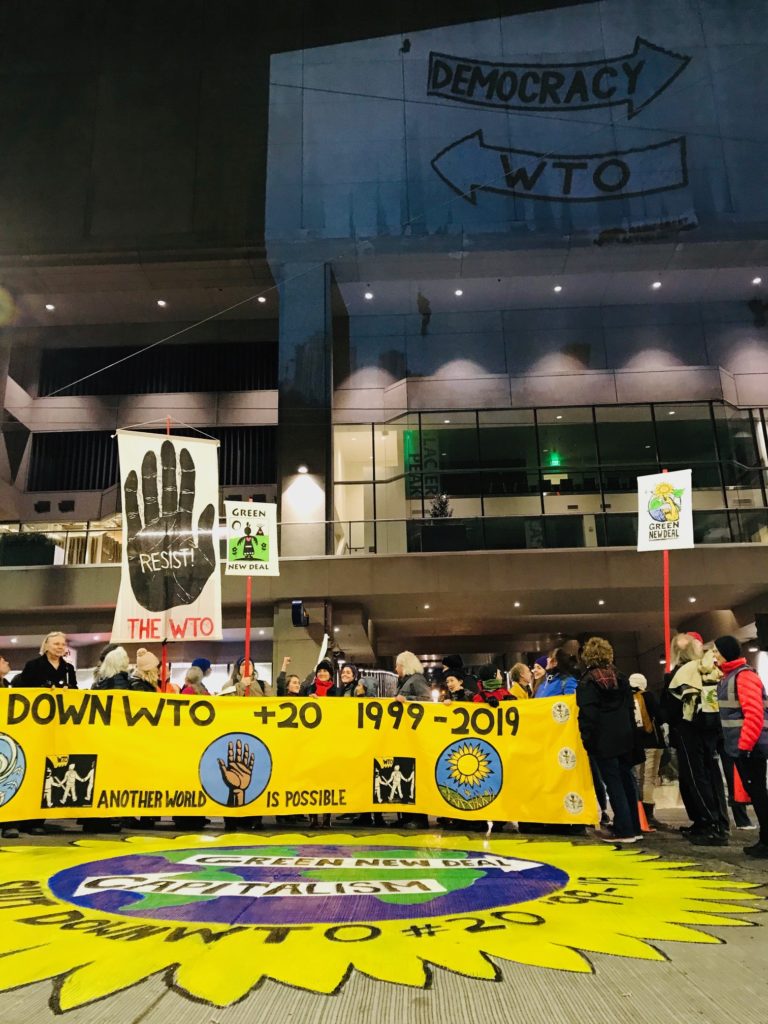 People take over the intersection in front of the WA State Convention Center on the 20 year anniversary of the WTO Shutdown. Photo credit Heather Day

Lisa Fithian gave her “Escalating Resistance, Mass Rebellion” training on November 30th, watch the full workshop (2 hours 30 minutes), courtesy of Ed Mays. Watch her presentation about her book, Shut It Down: Stories From A Fierce, Loving Resistance, which took place at Third Place Books on December 3, 2019; video courtesy of Elliot Stoller. A lifetime organizer, Fithian speaks about how now is the time for us to rise up if we are to save the things we love in this world.

CAGJ was featured in several articles the week of WTO+20: 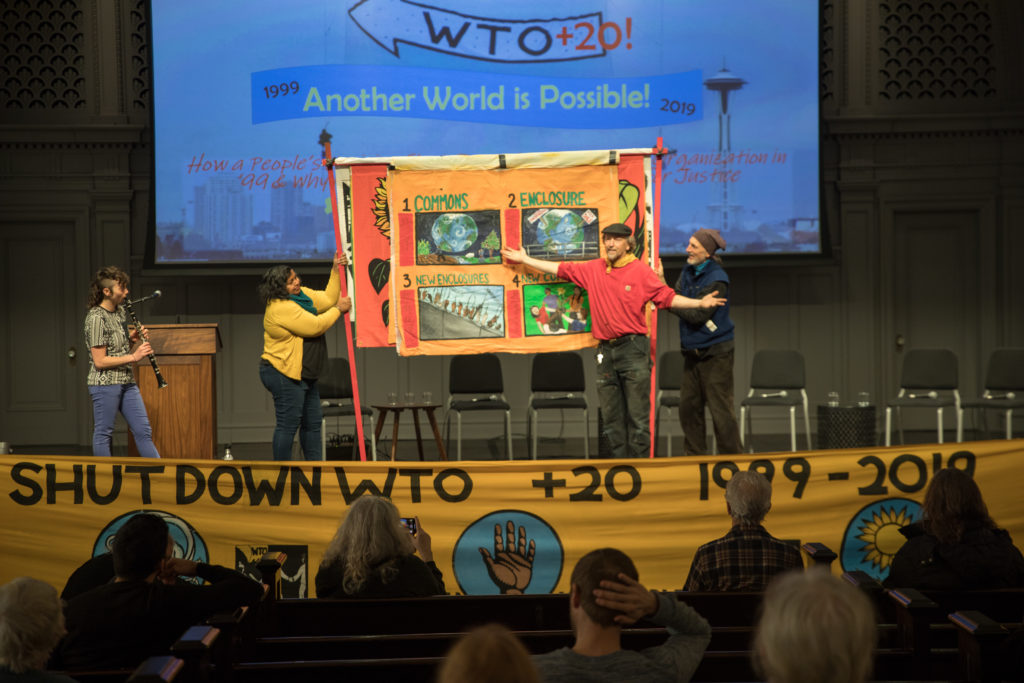 A cantastoria kicked off the event at Town Hall Seattle. This ancient art-form was shared by David Solnit to tell the story entitled “WTO to GND: WTF!” Photo credit Alex Garland

Another World is Possible! WTO+20: How a People’s Uprising Shut-Down the World Trade Organization in ‘99 & Why it Matters for Today’s Movements for Justice

Excerpts of this Report-Back are taken from article co-authored by Heather Day and David Solnit published in Common Dreams.

On November 30th, organizers of the WTO uprising, from Seattle and beyond, collaborated to mark the anniversary, twenty years to the day, in ways befitting our ‘festival of resistance’. Community Alliance for Global Justice sees this work as a key part of our role locally, to ensure Seattle activist history is remembered and honored. The stories of 1999 get told in many ways; this year CAGJ partnered with United Food & Commercial Workers Local 21 to highlight the critical role of direct action in shutting-down the WTO’s opening ceremonies on Nov. 30 1999, as this is too often left out of WTO narratives. We highlighted the through-line of direct action from the 1919 Seattle General Strike to the 1999 WTO protests to protest movements making history around the world in 2019!

At our Town Hall event, “Another World is Possible: WTO+20”, we told stories through speeches, photos, and theater, and organized to support today’s struggles. Workshops addressed strategies to prevent expansion of Big Tech power in today’s WTO, La Resistencia’s campaign to shut-down the Northwest Detention Center, and how to push Seattle’s Green New Deal further. In addition, Lisa Fithian gave her “Escalating Resistance, Mass Rebellion” training to inspire us to rise up to protect the things we love! Later we took direct action and danced in the streets while images from 1999 were projected onto the Convention Center, where the WTO talks collapsed at the end of the Battle in Seattle. We caught up with old friends, and brought along youth climate strikers. It was a beautiful day of remembering, and building another world. 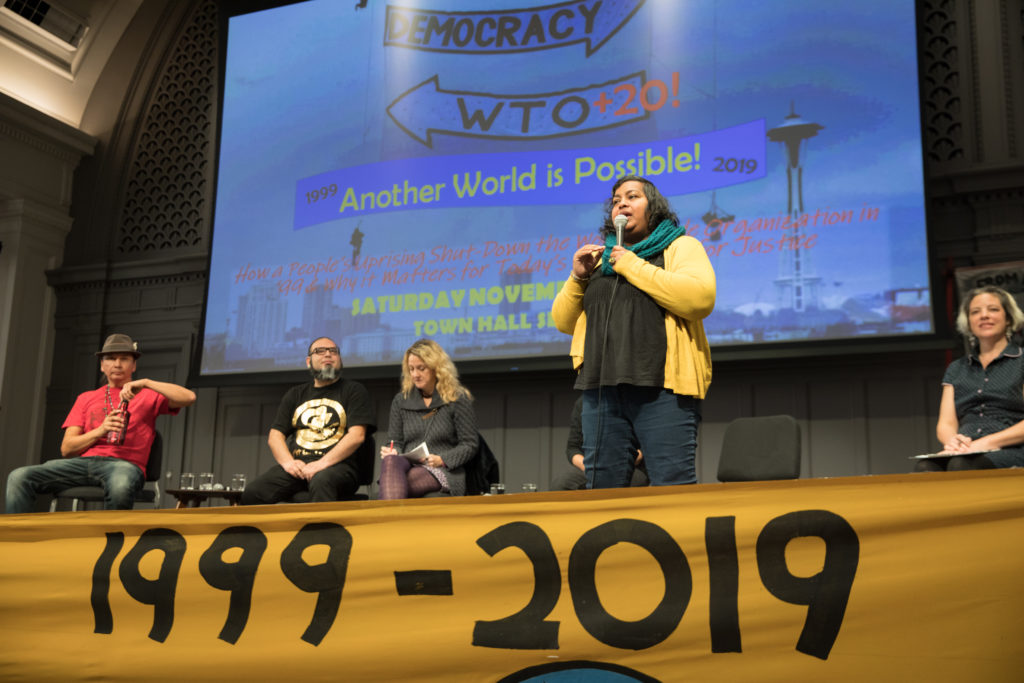 In the opening forum, several organizers shared their reflections on the significance of the 1999 direct action, including Nancy Haque, Executive Director of Basic Rights Oregon, whose affinity group took over one of the intersections near the WTO meeting. “What made the difference in Seattle was the thousands of people willing to risk arrest, the thousands of people saying ‘I will lay my body physically down,’ whether it’s on a street corner or putting your neck in a bike lock, people were saying ‘I am willing to lay down and put my body in between this machine – the WTO – and our planet.’  And it made all the difference in the world to a protest that would have gotten very little attention to something that we’re still talking about today and still thinking about…we said that if we slow them down for a minute we’ll have won, if we slow them down for a second so they have to think about what they’re doing, and why they’re here, and what they’re trying to do to our planet, we’ll have won. And so to actually have shutdown the meeting was an incredible victory and joy.”

Edgar Franks, farmworker organizer with Familias Unidas por la Justicia was a student north of Seattle in 1999. “As a young student, coming from a Mexican family, farmworkers, the Zapatista struggle was something very near and dear to us, and something we want to learn from and build something like that locally in our small community in Skagit County. So over the course of a couple of months a small group of us had made it a point to come to Seattle, even though none of us knew what the WTO was.” His group joined thousands at Memorial Stadium the morning of November 30th: “It was a big huge union rally which made me really feel good…That was one of the first times that I had ever seen white people talking about worker rights and standing on the side of workers. Little did we know, eventually a lot of those people would help us be part of the boycott and participating in picket lines almost twenty years after the fact of the WTO.”

Several of the speakers, including Franks, participated in past WTO Ministerials;  Deborah James has been at every one since the 2001 Doha meeting in her role as coordinator of the Our World Is Not for Sale Network. “We have been wildly successful in stopping the expansion of the WTO. But we have not been successful in transforming the system and changing the bad rules that harm millions of people around the world,” James explained in her talk that focused on how big tech companies are attempting to write new rules to have control over how data is used. “Data should be for the public good, for the public benefit, not to make it privatized,” James exclaimed.

Indian food sovereignty activist Vandana Shiva, who spoke at the sold-out Benaroya Hall forum organized by International Forum on Globalization in Seattle in 1999, is an outspoken critic of the WTO. Regretting that she could not join in person, she sent a video greeting instead. “Seattle is the home of both the WTO protests of 20 years ago, and the home of the richest billionaires in the world. All we have to do is see how the billionaires became the billionaires they are: free markets for the billionaires, and closed markets for the hardworking small farmers. This has killed hundreds of thousands of people.”

Lisa Fithian, author of Shut It Down: Stories from a Fierce, Loving Resistance, shared that “In Seattle, we didn’t just rise up out of fierce resistance, but we rose up out of fierce love for one another, taking care of one another, despite all of the harm- psychological, physical, emotional- that was done to stop us. When we shut things down, we are in the process of opening up a new space for something else to emerge.”

Speaking to the central role of direct action in movements today, Paul Cheoketen Wagner, founder of Protectors of the Salish Sea, reminded us what is at stake. “We’re fighting for our very existence right now.  So when we stand in front of those oppressive powers, when we go inside of Chase Bank to shut them down, when we go in front of the capital, we walk 47 miles to tell Governor Jay Inslee to stop killing our culture, we say: ‘Your government is killing our salmon and that’s who we are. Stop destroying the culture of our children.’” 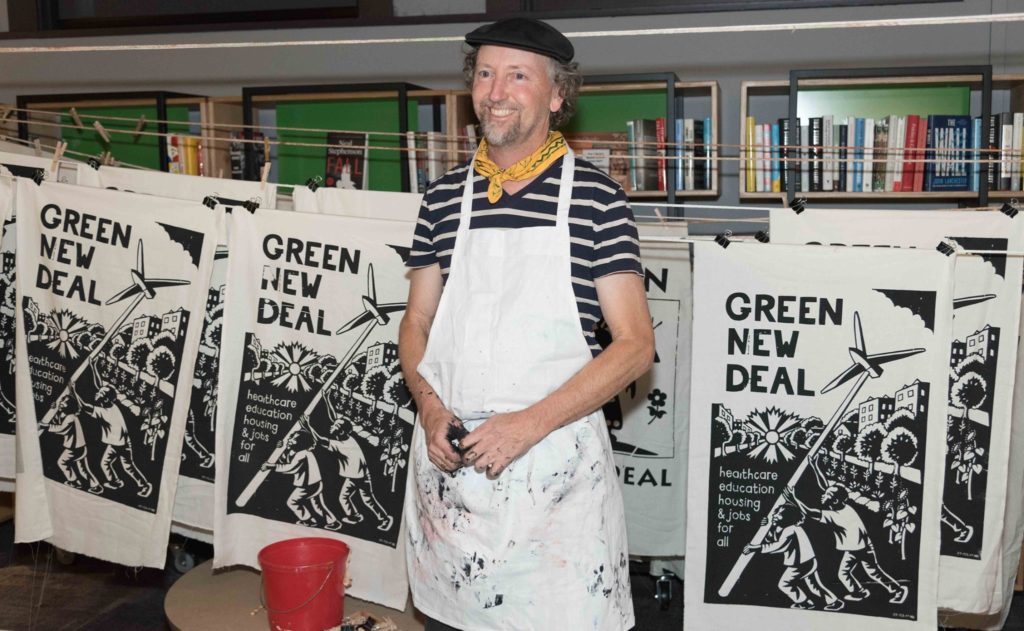 Artmaking also took place as Correo Aereo shared their music in the morning, and David Solnit led screen printing and hand painting of patches for all the participants to take with them to commemorate 20 years. A set of Green New Deal designs were also screen printed and hand painted and given to local climate justice groups. Their art-work is part of the Green New Deal Arts Kit, new designs by 5 movement artists coordinated by art.350.org and Labor Network for Sustainability. We closed with music from Jim Page, including his WTO song (more below!).

Marking the anniversary of the WTO street uprising would not be complete without getting into the streets. In the evening a hundred people took over the intersection of 8th Ave and Pike St, a few blocks from Pike Place Market and directly in front of the WA State Convention Center, where the WTO meeting collapsed in failure 20 years ago. Dozens of activists chalked and painted a street mural in the intersection. The image referenced the famous one way signs in opposing direction reading DEMOCRACY/WTO, but updated to read “GREEN NEW DEAL/CAPITALISM.” At the same time, Indymedia co-founder and co-director of “This is What Democracy Looks Like”, Jill Freidberg, guerrilla projected giant beautiful footage from the WTO protests onto the actual side of the Convention Center. Longtime artist-photojournalist-organizer Dana Schuerholz also projected her photos of the shutdown from 20 year ago. As all of this was taking place, Seattle iconic singer-songwriter Jim Page sang songs, culminating in a sing-along of “Shut it Down, Didn’t We.” Seattle singer-songwriter and songleader Alexandra Blakely led the group in song and performed with her daughter. It was a joyous celebration and action highlighting the Green New Deal! 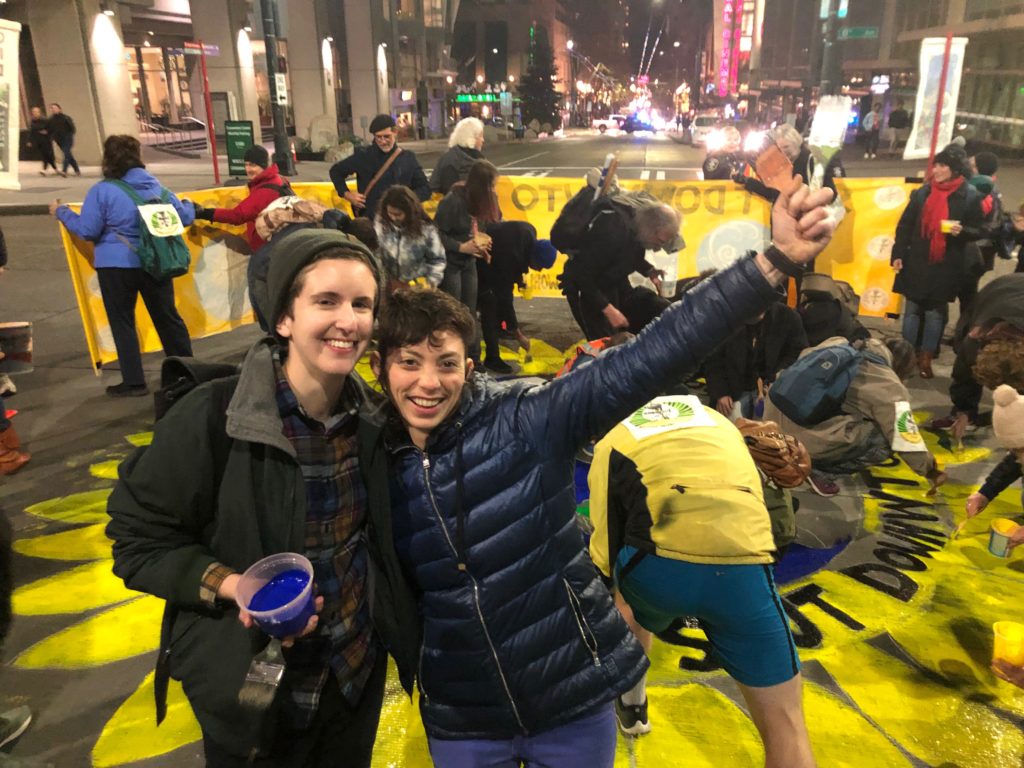 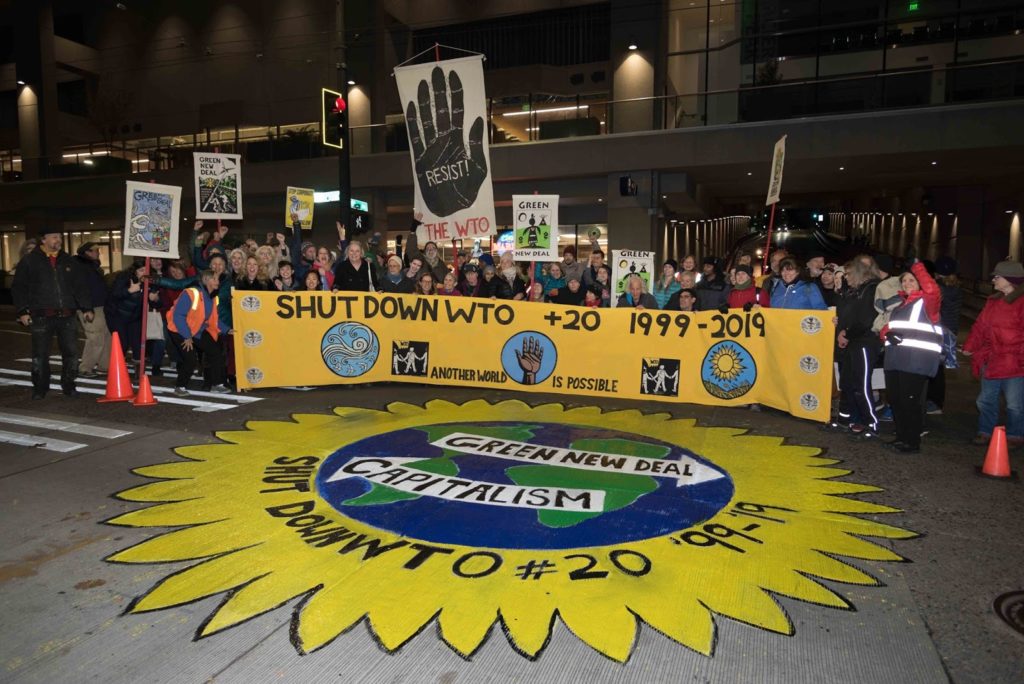 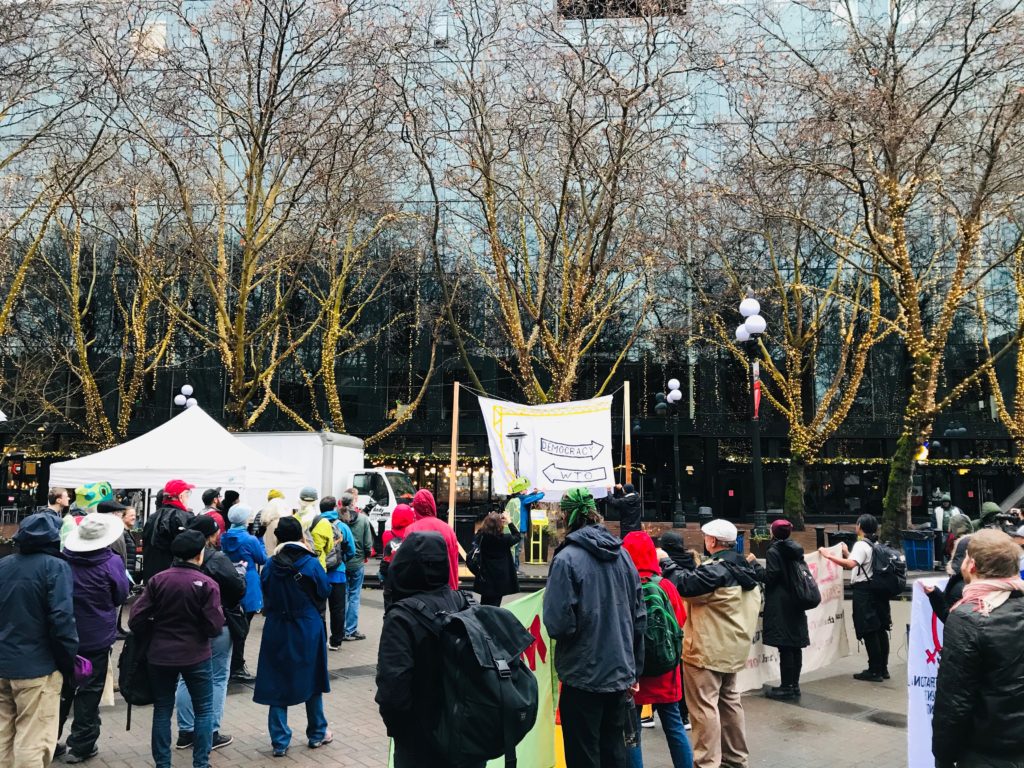 ON SAT Dec 7th, Washington Fair Trade Coalition hosted a rally, march, workshops and keynote with Joseph Stiglitz.  Following the rally, we marched to the Federal Building accompanied by rousing chants and music!

In the afternoon we re-convened for several workshops, including CAGJ’s on Food Sovereignty vs Free Trade, attended by over two dozen people. That evening we had the privilege of hearing from Lori Wallach, Global Trade Watch, and Joseph Stiglitz.

WTO+20 Environmental Issues and Trade Workshop Selden Prentice from 350 Seattle with Manuel Pérez Rocha of the Institute for Policy Studies and includes a short video address by Bill McKibben. (44 minutes)