Watch the full video of the Town Hall event on YouTube, thanks to our comrade Ed Mays of PirateTV!

Check out the livestream of the rally

The Alliance for Food Sovereignty in Africa (AFSA) launched the “Agroecology for Climate Action” campaign in early 2019. As an allied member of AFSA, AGRA Watch demonstrated our commitment to this campaign this month by organizing a rally and an event with Million Belay, Coordinator of AFSA, and Ethiopian expert on indigenous livelihoods, food and seed sovereignty. Million was joined by activist researcher and author Timothy A. Wise, who came to Seattle to promote his new book, Eating Tomorrow: Agribusiness, Family Farmers, and the Battle for the Future of Food (New Press 2019). 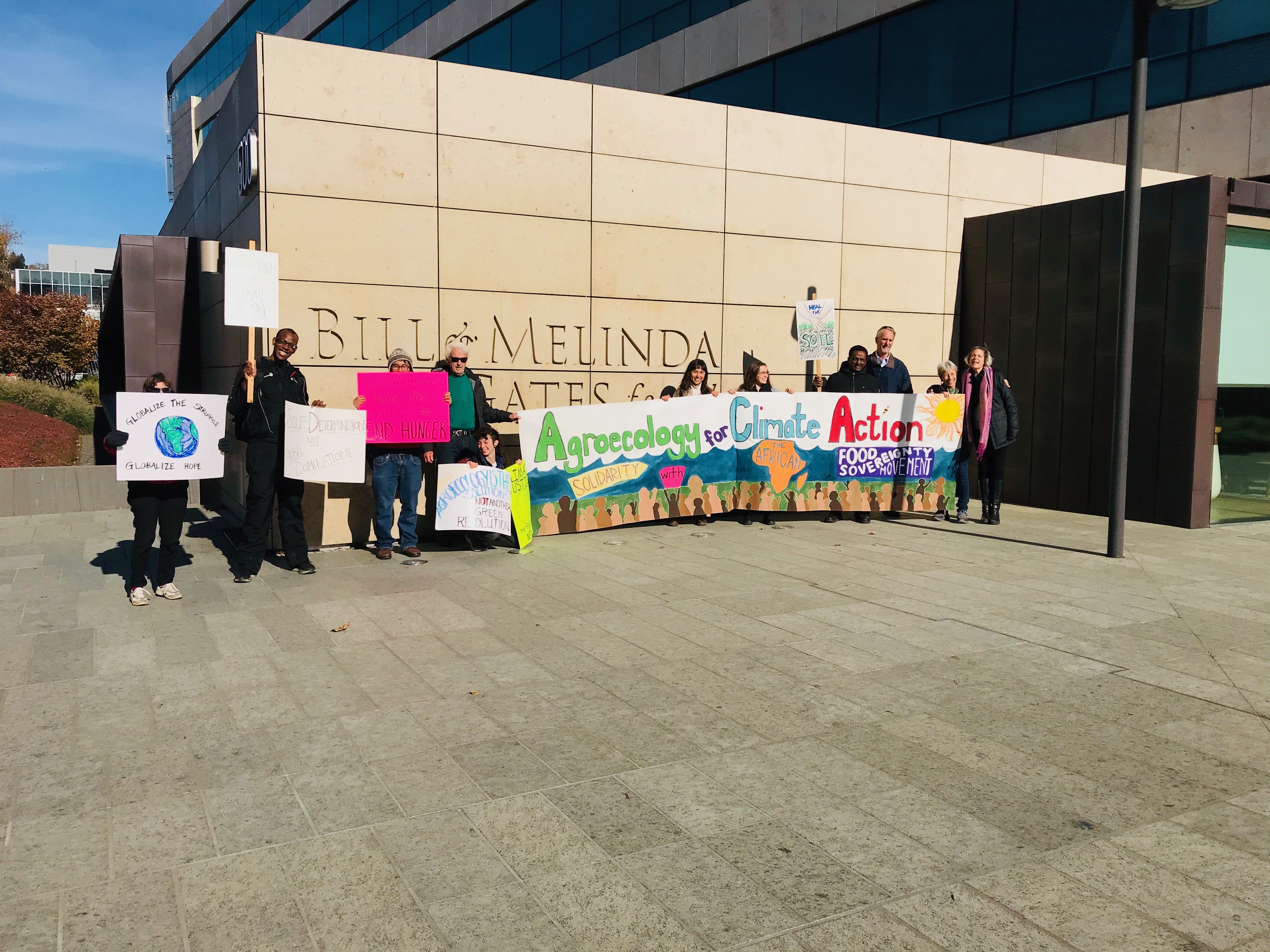 AGRA Watch is joined by Timothy Wise and Million Belay for a rally outside the Gates Foundation.

Agroecology for the Climate, Not Corporate Biotech! Rally in Solidarity with the African Food Sovereignty Movement

At noon on October 30, Million and Tim joined CAGJ activists outside the headquarters of the Bill & Melinda Gates Foundation to call attention to the world’s largest private foundation and biggest funder of biotechnology programs in Africa. The Gates Foundation launched AGRA, the Alliance for a Green Revolution in Africa, in 2006, and has poured millions of dollars into the initiative to steer the course of African agriculture toward biotechnology and reliance on hybrid seeds and chemical fertilizers. By influencing policies and monopolizing control over markets, AGRA secures African farmers as a resource pool for the Global North and transnational corporations. Both Million and Timand together we chanted “Agroecology is the solution, not a failing green revolution!” and “Self-determination, not global domination!” Check out the livestream of the rally! 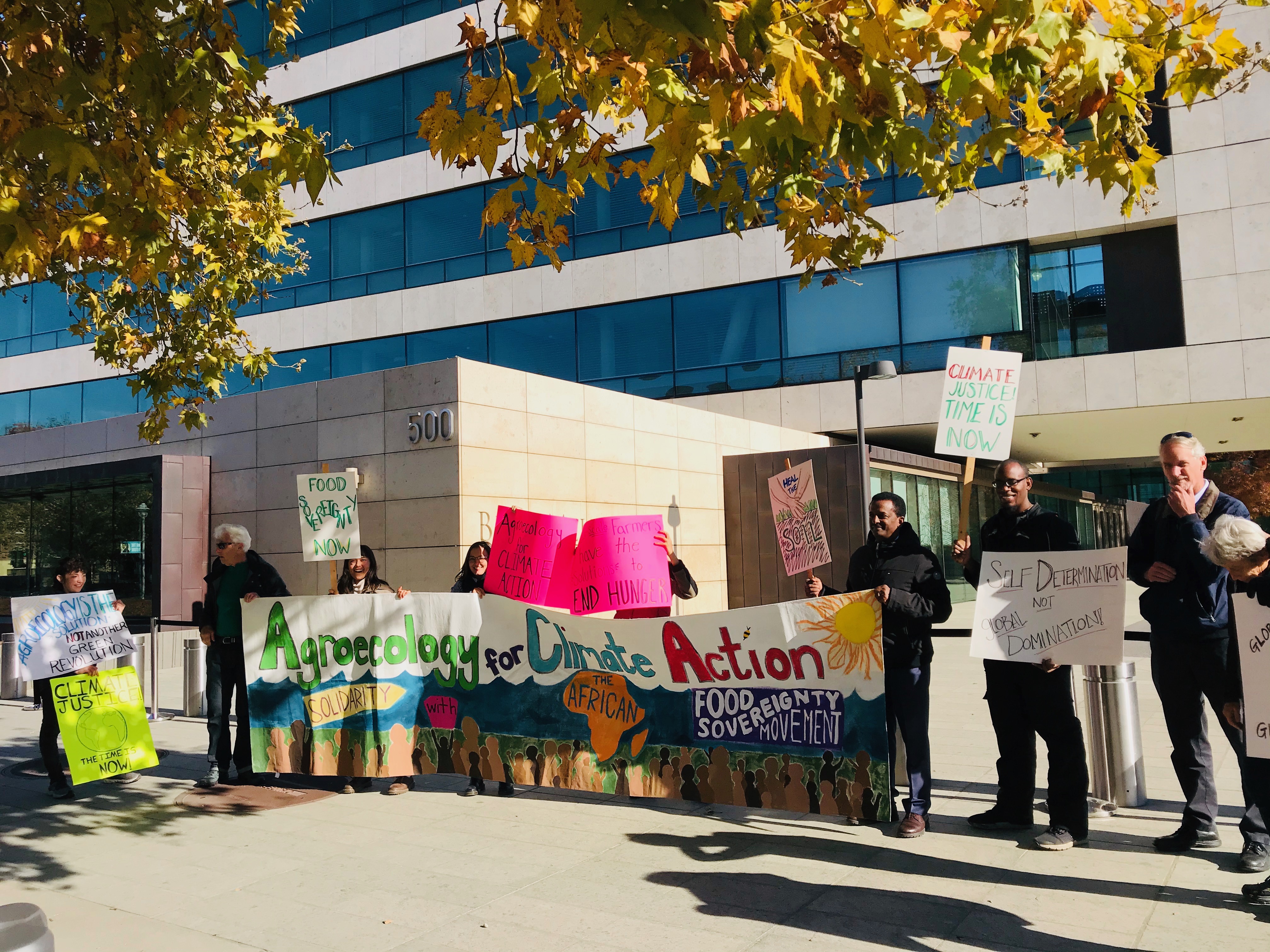 Eating Tomorrow: The Battle for the Future of Food in Africa

That evening, Million and Tim engaged in a discussion at Town Hall Seattle on climate change, farmers, and the future of food, co-hosted by CAGJ and Town Hall Seattle. Around 30 people joined us for a special pre-event reception with Ethiopian food and a chance to connect with our guests. We hung up our Agroecology for Climate Action banner showing our solidarity with the African food sovereignty movement, (which was revealed at this year’s SLEE dinner). By 7:30, over 100 people filled the room as Heather and Simone kicked off the evening reminding everyone of why we do this work: Many in the African food sovereignty movement call the Gates Foundation’s agricultural development programs neocolonialism because it prioritizes Western interests over farmer self-determination. CAGJ founded AGRA Watch to challenge both AGRA and the Gates Foundation on their home turf, due to their neocolonial efforts to corporatize African agriculture and we work to promote real solutions to hunger and poverty coming from small-scale farmers. 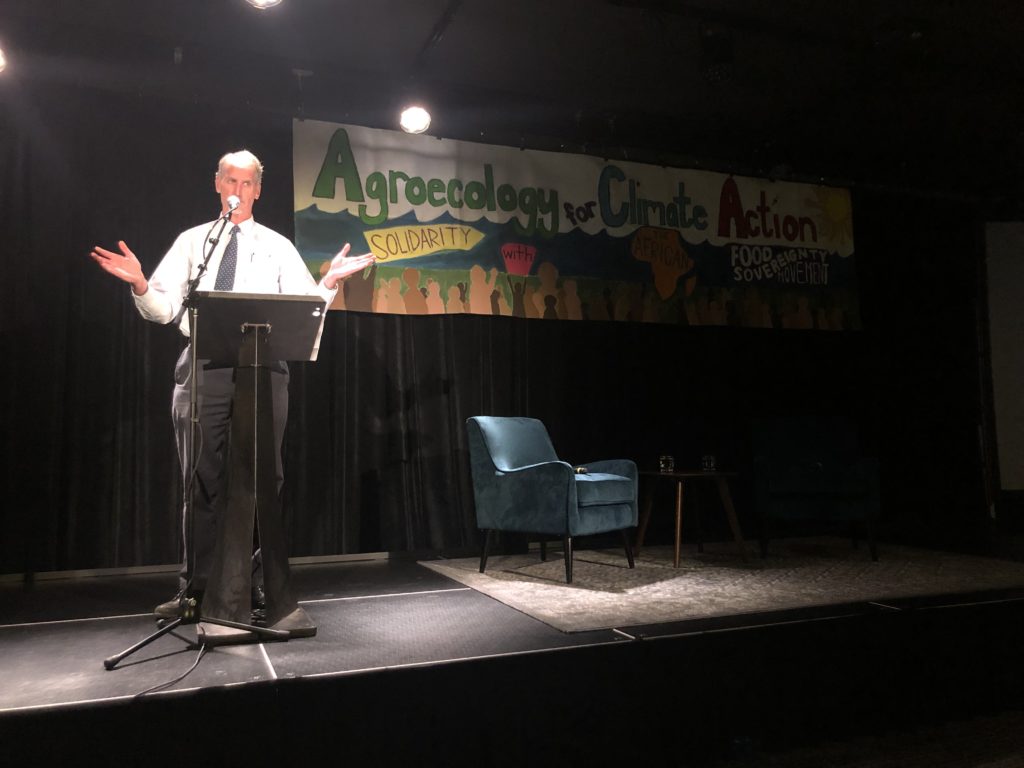 Tim opened by crediting Frances Moore-Lappe, the founder of Small Planet Institute, with the title of his book, and quoting her statement in her 1971 book Diet for a Small Planet that there is not a scarcity of food, there is a scarcity of power from small-scale farmers. Tim spoke to the flawed framing of the question, “how do we feed the world?” remarking, “We all know who we mean when we say ‘we’… we mean the Global North, the industrialized countries, our high-yield, high-tech agriculture. Nothing could be further from the truth: we’re not feeding the world now. Seventy percent of the food consumed in developing countries is grown in those countries. The majority of that food is grown by small-scale farmers. That’s who’s feeding the world. There is no world waiting out there passively to be fed, which that question implies. The majority of the hungry in the world are in agricultural communities and many of them are farmers, most make some of their living from farming. They’re not waiting passively to be fed, they’re struggling daily to try to feed themselves, their families, and their communities.” Citing his extensive field research, Tim went on to describe what he saw take place in Malawi with the failed “Malawi Miracle” of hybrid maize, and what he learned about the influence of Monsanto and private donors in shaping the priorities of Malawi’s agricultural production. He shared stories of conversations with people in government departments clearly under pressure from the Big Ag and seed industries, noting that “they developed a seed policy on the template offered up by the Gates Foundation for ‘seed policy reform’…[that] strengthens the rights of commercial plant breeders, like Monsanto and the other multinationals…the policy threatened to outlaw the sale, exchange and saving of farmers’ seeds.”

Tim also highlighted solutions he witnessed from small-scale farmers practicing agroecological farming alternatives that were working to feed their families, increase yields, and reduce costs. One example was a community in Lobi, Malawi that rejected the green revolution model, and revitalized the use of a traditional orange variety of corn, high in vitamin A, whose seeds could be saved year-to-year. The farmer-to-farmer agroecology project this community started was an effort to reduce dependence on maize through crop diversity. “They intercropped all kinds of crops alongside the corn, and in that process developed an entire agroecology model that rebuilt the soil, diversified diets, diversified crops, and made the communities far more resilient to climate change because their soils held water better; when droughts came, they wouldn’t lose as much of their crops. They had roots in the soil…storms and floods wouldn’t wash away their top soil. And most importantly, when a drought killed their corn, they had something else in the ground that didn’t get killed and that would sustain their families.” Tim concluded that in order to repair our food system, we need to break the power of agribusiness. 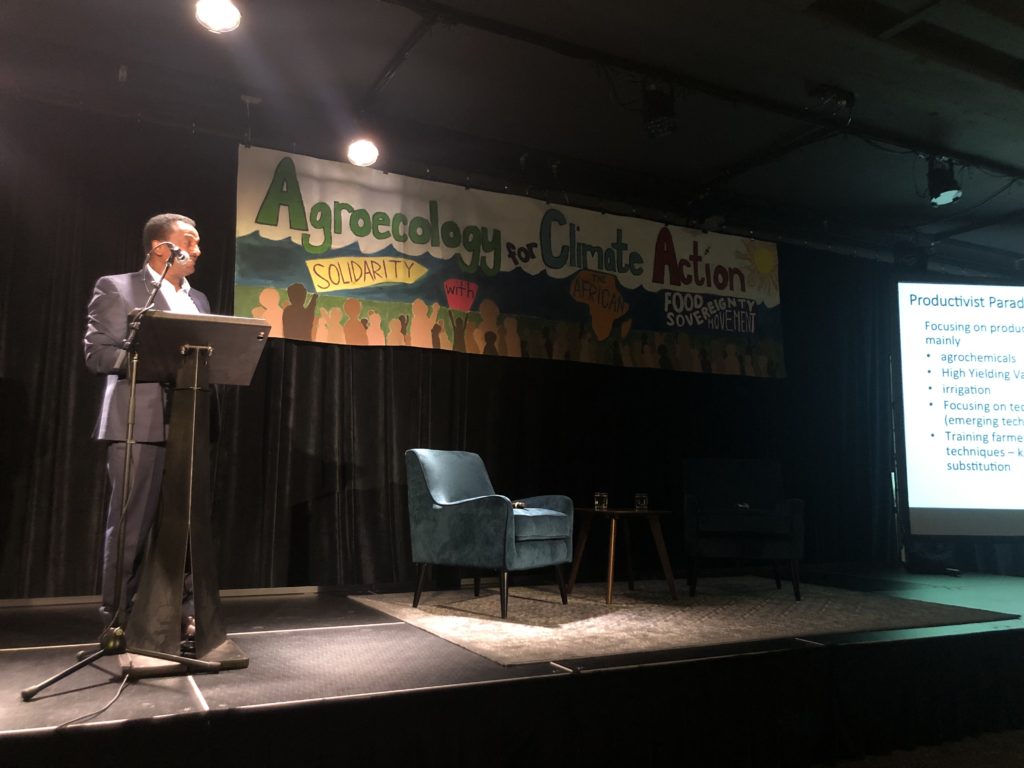 AFSA was founded in 2008, and now operates in 50 African countries (out of 55). Million shared, “The purpose is to create a single African voice… ASFA believes in championing small African family farming, production systems through agroecology, and farmers managed seed systems. That’s one hand, but on the other hand we fight also, [by] resisting the corporate industrialization of African agriculture, seed and land grabs.” 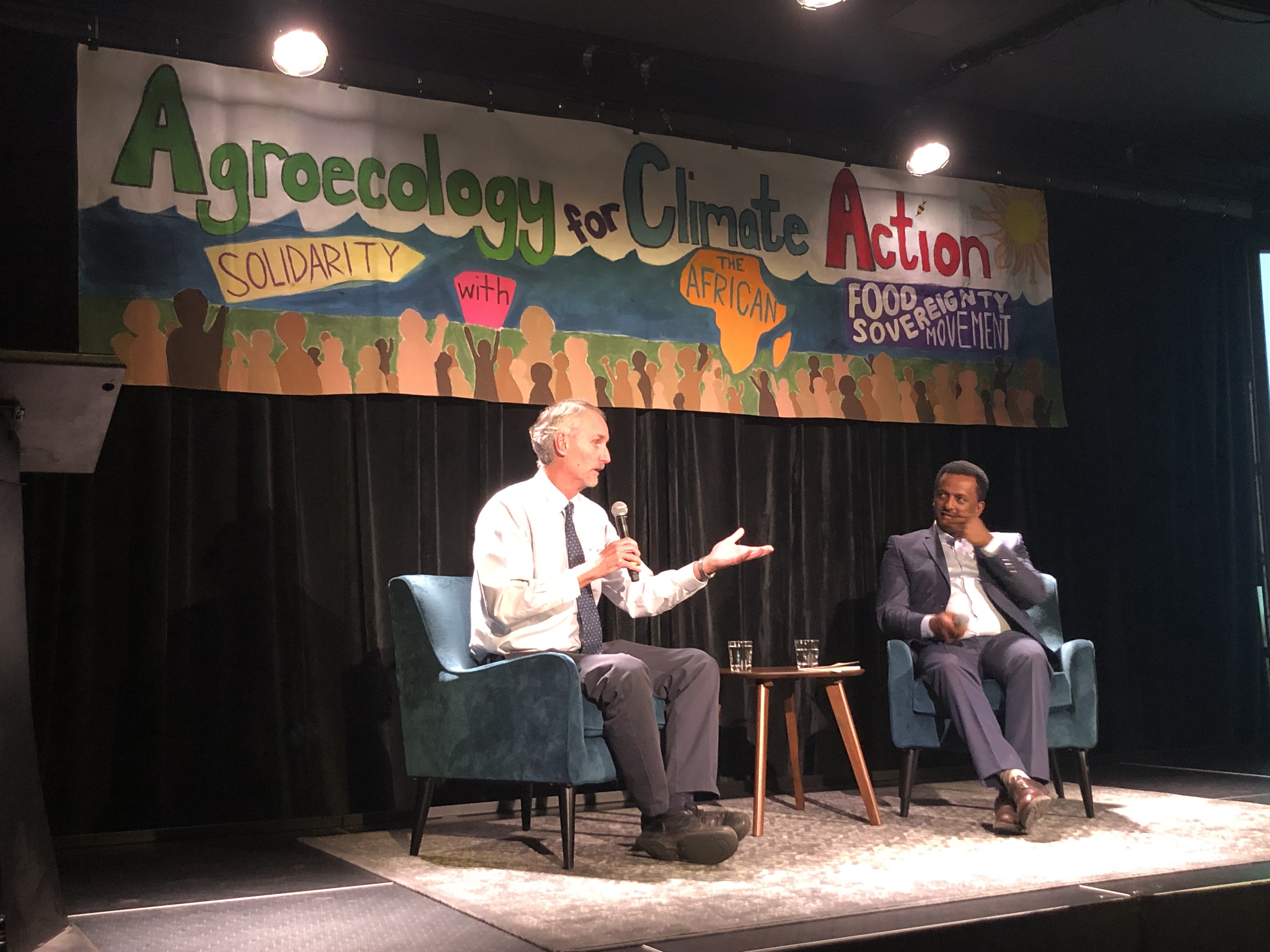 Tim and Million engaged in a conversation on these themes, discussing the role of the Gates Foundation and AGRA in locking in governments to a particular system of agriculture via chemicals, seeds, and targeting specific crops, and the decrease of production of highly nutritious and resilient grain varieties due to land being grabbed for commodities. Million used the example of barley in Ethiopia, where there are 19 varieties for which different communities have unique cultural relationships, and how the threats to continuing the seed-saving of this barley is a huge loss. They also discussed the persistence of African people and some governments that continue to ban GMOs while developing agroecology policies.

Want to get involved in AGRA Watch? Contact simone@cagj.org to learn more and plug into our work! 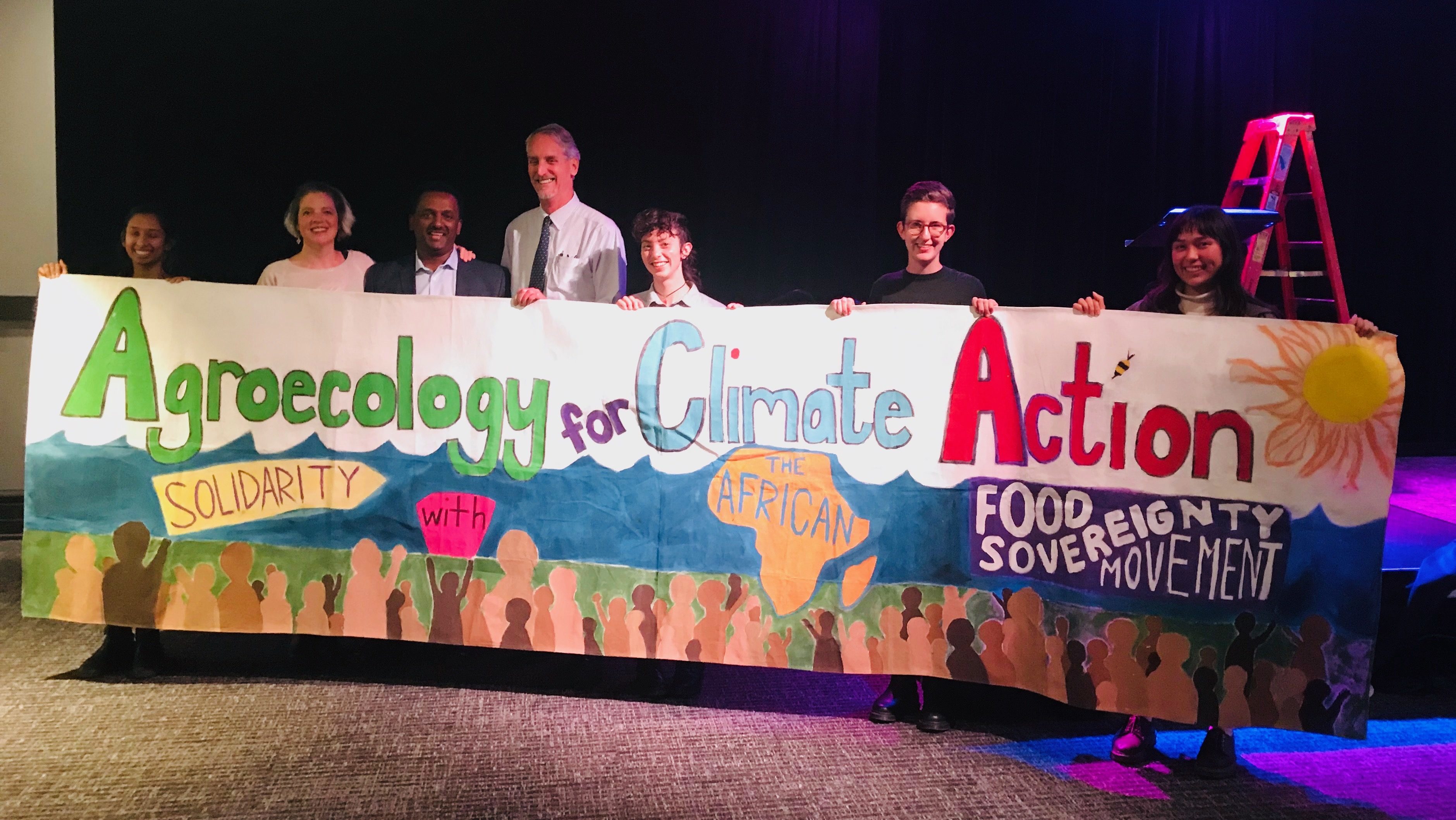 Members of CAGJ hold the Agroecology for Climate Action banner with Million Belay and Timothy Wise.