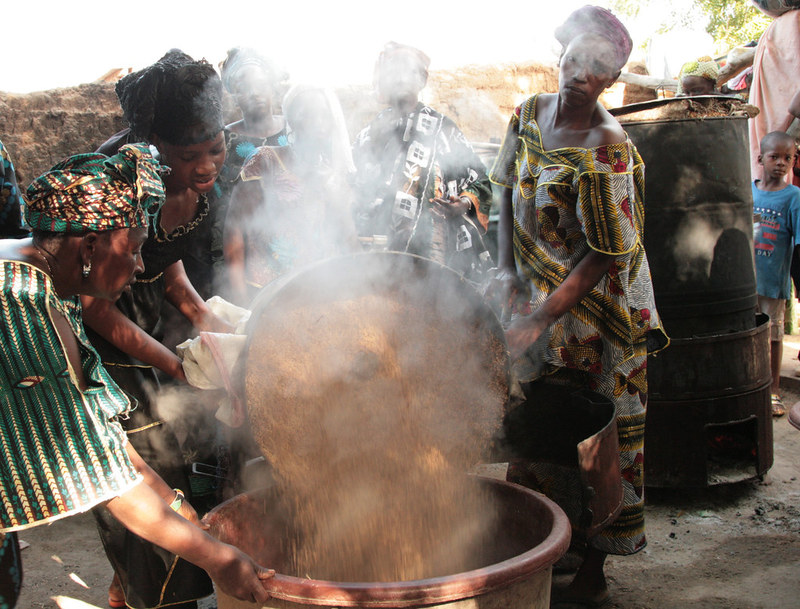 As Africa’s population continues to grow, the demand for food increases alongside it, yet the effects of climate change will make food production much more difficult. Global warming is expected to cause a 10-20% reduction in Africa’s food production, resulting in a surge of food imports to the continent and increased prices.

However, the impacts of climate change can be lessened if greenhouse gas emissions are reduced in the main polluting countries. Such reductions will require a profound transformation of the global food system- from a model that favours the industrialised production of cheap commodities that are processed and shipped to Africa and other parts of the world, to a model based on agroecological production and local food systems. While African farmers are already using agroecological methods, they still require access to sufficient land, water, and seeds, and policies and programs that support them.

In the 1980s, the continent abandoned local food systems under pressure from colonial powers and multinational lenders, and turned toward massive imports of staple foods. In the aftermath of the global food crisis in 2007-08, several major initiatives were launched in Africa to boost food production and reduce reliance on these imports. Most of these initiatives failed because they focused on investment from large agribusiness corporations, and the incentives given to these companies failed to produce the private investment that was promised. Africa has since continued to import basic staple foods.

Many African governments have spent the past two decades complying with demands from big seed companies to make their laws and regulations corporate-friendly, under heavy pressure from the World Bank, foreign governments, and major donors like the Bill & Melinda Gates Foundation. The private sector is almost exclusively focused on plant breeding for big money-making hybrid crops like maize, and is hardly present when it comes to important traditional crops that are more resilient to climate change.

The industrial food system is associated with up to half of all global emissions, therefore a reduction in emissions has to involve a wholesale transformation of the global food system. The climate crisis requires approaches to adaptation that support Africa’s food systems and are led by local small-scale producers, not approaches that rely heavily on chemical inputs and seeds sold by multinational corporations, such as those promoted by the Gates Foundation and the Alliance for a Green Revolution in Africa. Africa’s local food systems are what sustains the continent today, and what can sustain it into the future.