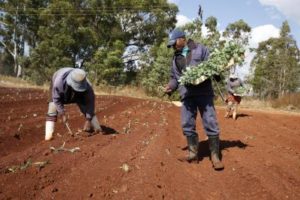 Original blog written by Dr. Stephen Greenberg, a senior researcher at the African Centre for Biodiversity.

South Africa’s smallholder farmer support policy was meant to support marginalized producers, but has been captured under the neoliberal National Development Plan (NDP). The Agricultural Policy Action Plan (APAP) lists crops by commercial potential and emphasizes global competition and export markets to produce capital-intensive production models. This is a large-scale commercial business model that is being imposed on smallholder farmers and household producers.

There are around 2.4 million smallholder farmers and household producers in South Africa, and they mostly generate a very small income from farming. Through the NDP and APAP, large-scale commercial farmers will appropriate some of the funding meant for smallholders through the allocation of drought relief for large-scale farming. To receive direct support from the public sector, smallholder farmers will need to take out interest-bearing loans for capital intensive production, further indebting them and privatizing public support.

In April 2019, the Department of Agriculture, Forestry and Fisheries (DAFF) held a national stakeholder consultation that revealed the networks between the African National Congress, DAFF, and medium and large black commercial farmers. While some NGOs and smallholder farmers were present, their decision-making opportunities were limited.

There are several contradictions in the latest draft of the policy, including an aim to reduce greenhouse gas emissions while pushing for mechanization and the use of synthetic fertilizers. While the policy emphasizes biodiversity conservation and agroecology, as well as participatory research and farmer to farmer extension, these positive statements are subordinated by the overarching commercial framework that demands commercial profitability from resource-poor farmers.

The best response is to continue to build supportive smallholder agroecology networks and resist the commercialization of smallholder farming. A more progressive and sustainable path for South African agriculture must be rooted in building a diverse smallholder foundation, using agroecological methods as a significant part of the food production system.