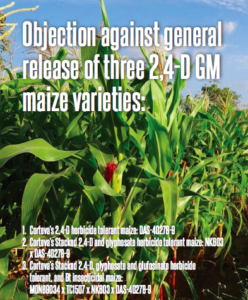 Originally posted on the African Centre for Biodiversity (ACBio) website.

In April 2019, the African Centre for Biodiversity (ACBio) published an objection to the release of three GM maize varieties and their pesticides — “the Agent Orange war chemical 2,4-D, as well as glyphosate [and] glufosinate” — by Corteva, formerly Dow AgroSciences, due to concerns toward human health and environmental safety. If the new varieties are approved, South Africa will begin cultivating the GM maize seed with its pesticides.

ACBio rejects the approval of these three varieties in South Africa on the grounds that there is inadequate evidence of the effects on human and environmental safety, and the potential socioeconomic impacts on South African farmers. Food production in sub-Saharan Africa is also negatively impacted by “degraded soil, pests, and climate change.” Industrial agriculture — the use of high external inputs, pesticides, and monocropping practices — adversely impacts the socioeconomic conditions of South African farmers by threatening future food production, results in biodiversity decline, and is also one of the largest contributors to climate change.

ACBio encourages agroecological solutions as opposed to GM industrial monoculture systems, such as
“push-pull systems developed specifically for Southern and Eastern African agricultural systems, by African and international agricultural experts [that] have shown huge successes in preventing pest destruction… with adoption of the technology increasing significantly in the last 15 years as a result. It is a low cost technology, proven to increase biodiversity and presence of natural pest predators, soil fertility, as well as provide additional crops for animal fodder, and production of drought-tolerant intercrops. This technology is thus highly suited to small-holder farmers, and has most crucially been shown to increase incomes and livelihoods.”

CAGJ also submitted an objection to the release of the three GM maize varieties, supporting “farmworkers, family farmers and smallholder farmers in advocating to halt the environmental and health risks that result from chemical pesticides and herbicides such as 2,4-D and glyphosate.” CAGJ urges the South African government to reject the GM staple crop seeds, citing evidence from the US that these pesticide-resistant crops will increase the use of 2,4-D and glyphosate, causing pesticide drift to other vulnerable crops; 2,4-D has resulted in more crop damage than any other pesticide in the US. These GM varieties will also lead to an increase in 2,4-D- and glyphosate-resistant weeds (over 90 million acres of US farmland are currently infested with glyphosate-resistant weeds), and pose serious health risks to farmers and anyone consuming the harvested food or products from crops grown with these toxic chemicals.