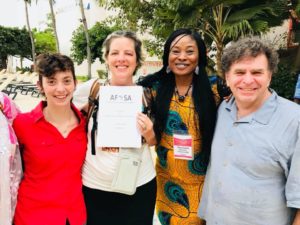 In early November, CAGJ leaders traveled to Senegal to participate in the 2nd African Food Systems Conference, followed by the annual General Meeting of the Alliance for Food Sovereignty in Africa (AFSA). Our delegation included AGRA Watch Co-Chair Bill Aal, and CAGJ staff Heather Day and Simone Adler. Simone spent the previous week in Kenya, where they met with our partners, agroecological farmers, educators, and food sovereignty activists to learn about the preservation of traditional and indigenous farming in the face of Big Ag’s corporatization of Kenyan agriculture, and major influence from the Gates Foundation. Read their blog here and see photos from our trip on Facebook.

AGRA Watch had been looking for an opportunity to send leaders to the continent to experience firsthand the work of our African colleagues practicing agroecology and organizing for food sovereignty. AFSA’s invitation to apply for Associate Membership and attend the Conference and Assembly became the impetus for our trip, and an opportunity to visit partners as well. We are excited to announce that CAGJ/AGRA Watch was officially approved as Associate Member during AFSA’s General Assembly!

Why go to Kenya and Senegal?

We had several goals for our trip, including building on the relationships that came out of the Africa-US Food Sovereignty Strategy Summit we hosted in 2014. It was wonderful to reconnect with four of the leaders who had been in Seattle: Million Belay, AFSA’s Coordinator, Mariann Bassey, AFSA’s Chair, Bridget Mugambe, AFSA’s Secretariat, and Elizabeth Mpofu, the general coordinator of La Via Campesina. We aimed to amplify the African food sovereignty movement, through reports and articles on the conferences. We also aimed to tell food producer and activist stories, to contribute to greater understanding of their struggles and victories. Overall, we sought to gather information to inform our strategy for the next several years.

Arriving in Saly, just south of Dakar, we joined over one hundred farmers, fishers, pastoralists, activists, people of faith, youth and organizers from across the African continent to focus on African food systems in the context of urban food systems, climate change, policy, the future of food, and protecting traditional African food systems. CAGJ and Small Planet Institute were the only two US organizations present at the conference.

Art as the means to analysis

The conference was facilitated through art, using poetry, sculpture, drama, and other methodologies not typical to this type of gathering. Mariann led us in chanting People Power! to energize us, songs were often shared, and Senegalese musicians and dancers contributed to the convivial feeling of the gathering. 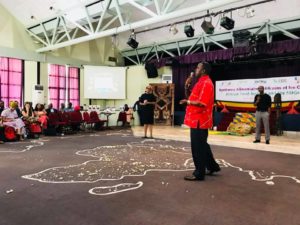 The conference opened with an invitation to place shells representing where we’re from on a map of the world sketched on the floor with tape. What could be read as a symbolic de-centering of the global North, only part of the US and Canada were outlined on the floor.

Next each participant was invited to write down where we need to shine light the most in the world, to bring transformative change; we placed candles on our messages, above the map. This was a way to expose the contradictions of the food system through our imaginations and our hearts, and to see where other participants felt we needed to focus our attention. 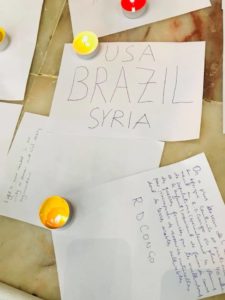 Another highlight of the first day was being asked, after hearing two keynotes, to write down one burning question. After dinner, by a fire on the seashore, we were asked to read our question out loud, and then throw it into the fire to create a collective intention. By stating our questions publicly, we felt a commitment to hold the questions of the group. 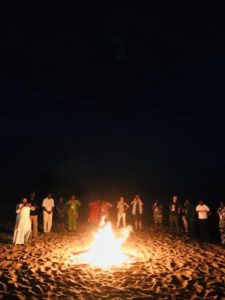 De-colonizing how we work together

The highlight of the next two days was our experience discussing strategy and alliances in “parliaments of knowledges”. The parliaments were formed out of the questions shared the night before, which were grouped thematically. We began by de-colonizing the idea of parliaments: the facilitators asked people to describe in their native languages what one calls those who hold knowledge, wisdom, and community decision-making. People shared the terms for elder councils, community leaders, and governance based on their cultural traditions. We participated in the parliaments on Rural Women and their Allies, Confronting State and Corporate Power, and Solidarity Across Continents. Each group was then challenged to sum up their discussion in a poem. During the report-backs, the core issues of each group were expressed both through concrete ideas and through performances, each more creative than the last. It was a truly awesome experience to witness, and to feel the bonds of connection in that room. 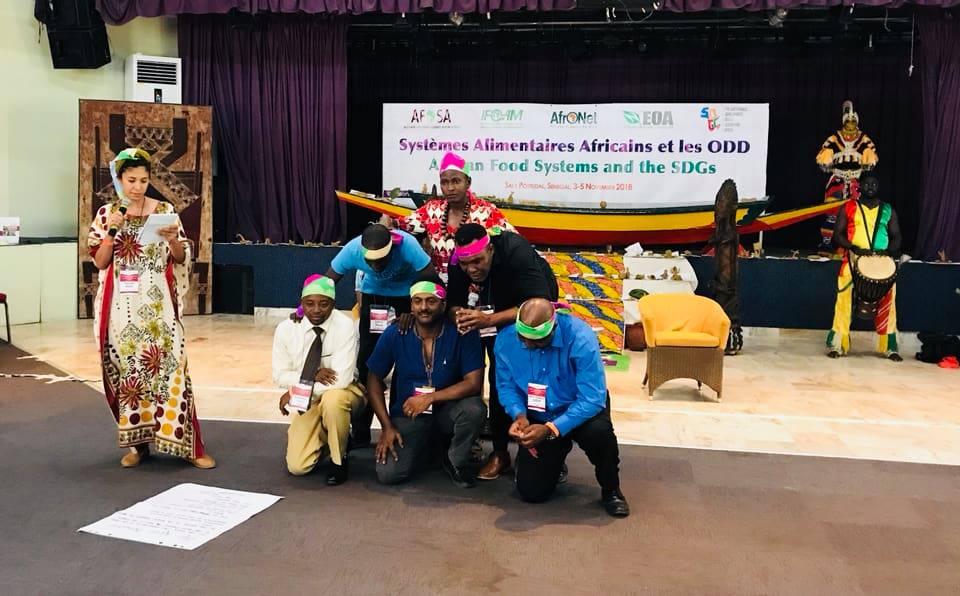 These are a few of the recurrent themes we heard throughout the conference: 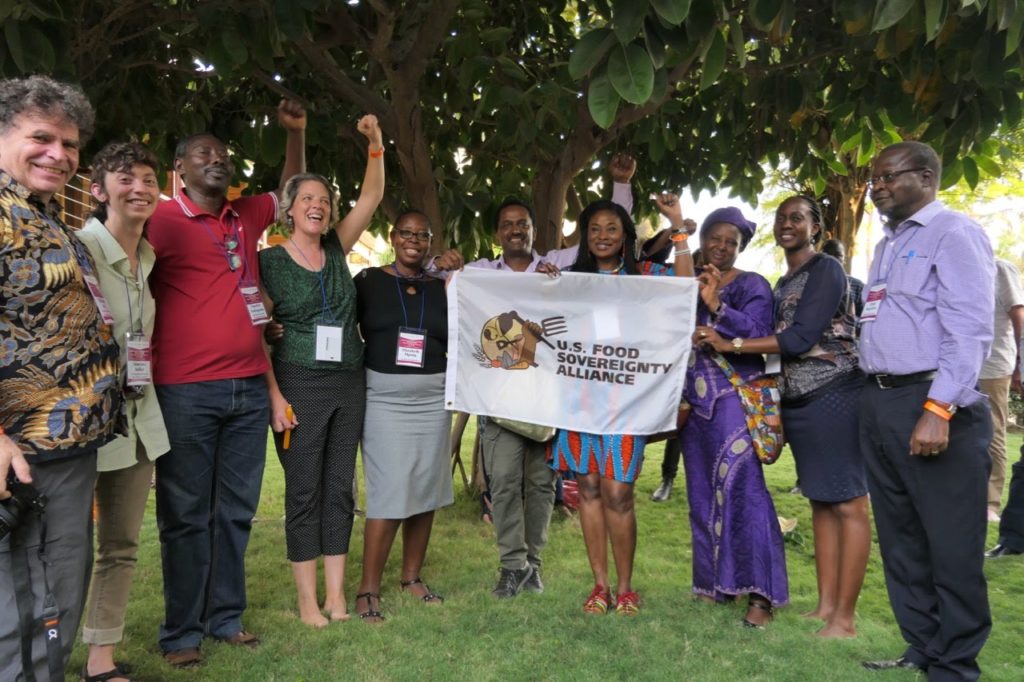 On the final day of the Food Systems conference, CAGJ had the opportunity to share our appreciation with the group for having been invited, and presented the flag of the US Food Sovereignty Alliance to AFSA as a symbol of our commitment to collaborating over the longterm. We are excited that USFSA will be applying for membership in AFSA in 2019, and CAGJ is facilitating communication between the networks.

On the first day of the AFSA General Assembly, there was a lot of excitement when AFSA Members were invited to help decide the first-ever continent-wide campaign. 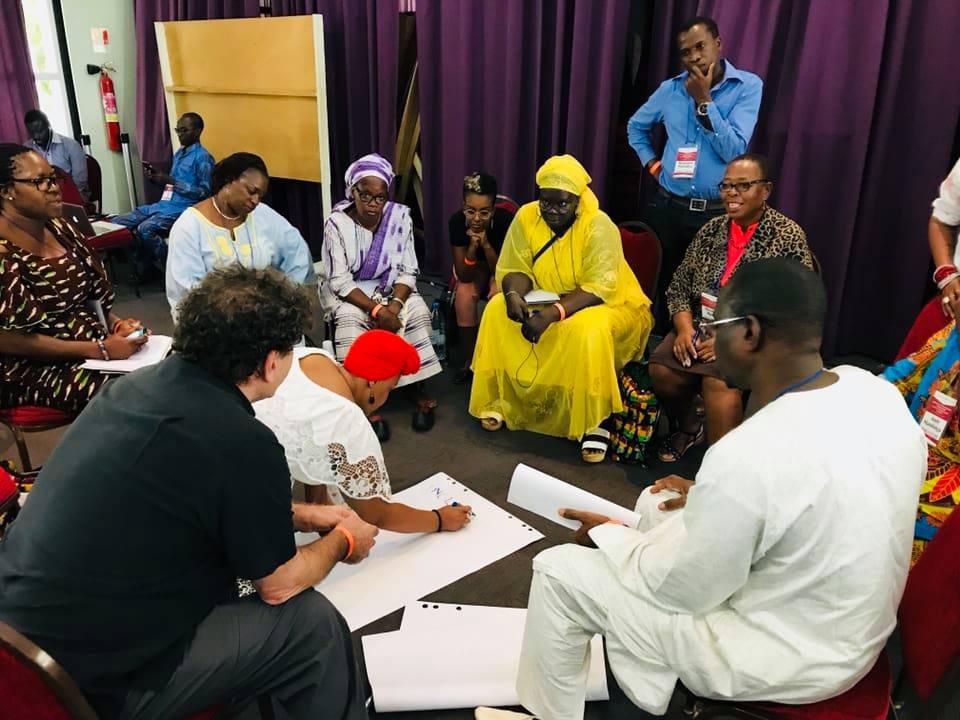 We first laid the groundwork for the strategic conversation by clarifying the meanings of Food Sovereignty, Agroecology, and their relationship. These are some of the words from the African participants to describe Food Sovereignty: It means producing what I eat; Having power over what we produce and pricing; It is a right; Culturally appropriate food; A vision for changing global power relations. Most importantly, it means autonomy of food producers, and it is linked to agroecology because we control seeds and all inputs.

Agroecology was defined by many as freedom. In their words, Agroecology means: having enough access to my own resources to feed myself in a free and autonomous way; freedom of production; freedom from chemicals; people and communities controlling the seeds used, the land and the water. 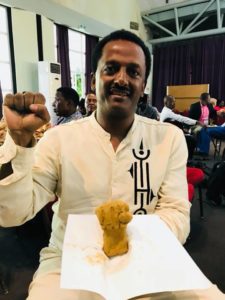 Million Belay, AFSA’s Coordinator, presented work that had already been done to narrow the possible continent-wide campaigns to eight possibilities that met the strategic needs of AFSA in this moment. He led us through a process whose objective was to choose one of these ideas, and after a couple of hours of deep deliberation, a decision was made! Agroecology for Climate Action will be the unified campaign of the coming year.

AGRA Watch is needed now more than ever

The time we spent with our colleagues heightened the sense of urgency we feel in resisting the corporate onslaught currently underway in Africa. Given that many of the challenges faced by the African food sovereignty movement are underwritten by the Gates Foundation, our campaign is needed now more than ever.

To give just two examples:

AGRA Watch is excited to take everything we learned into strategic planning for the next phase of our campaign. We will continue to share stories and interviews from our trip in the months to come, so stay tuned! 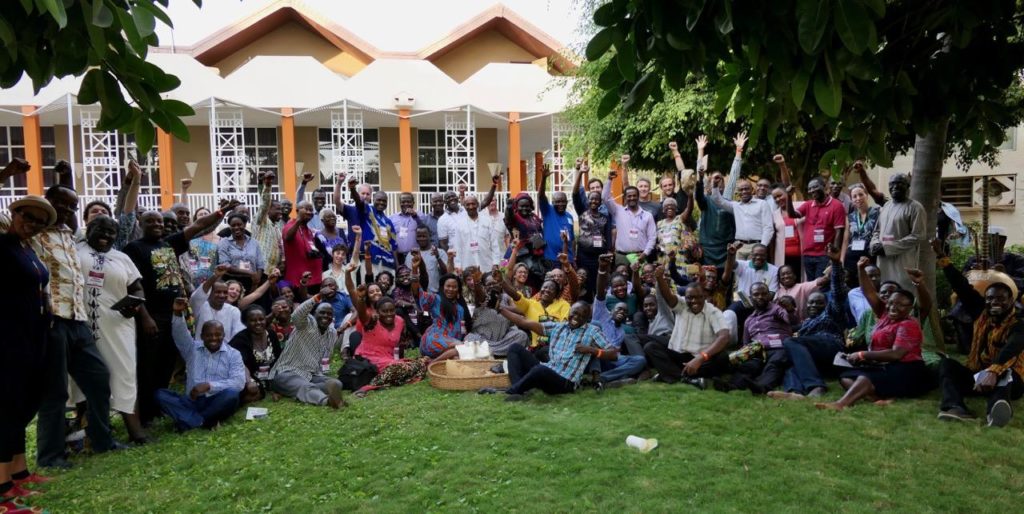