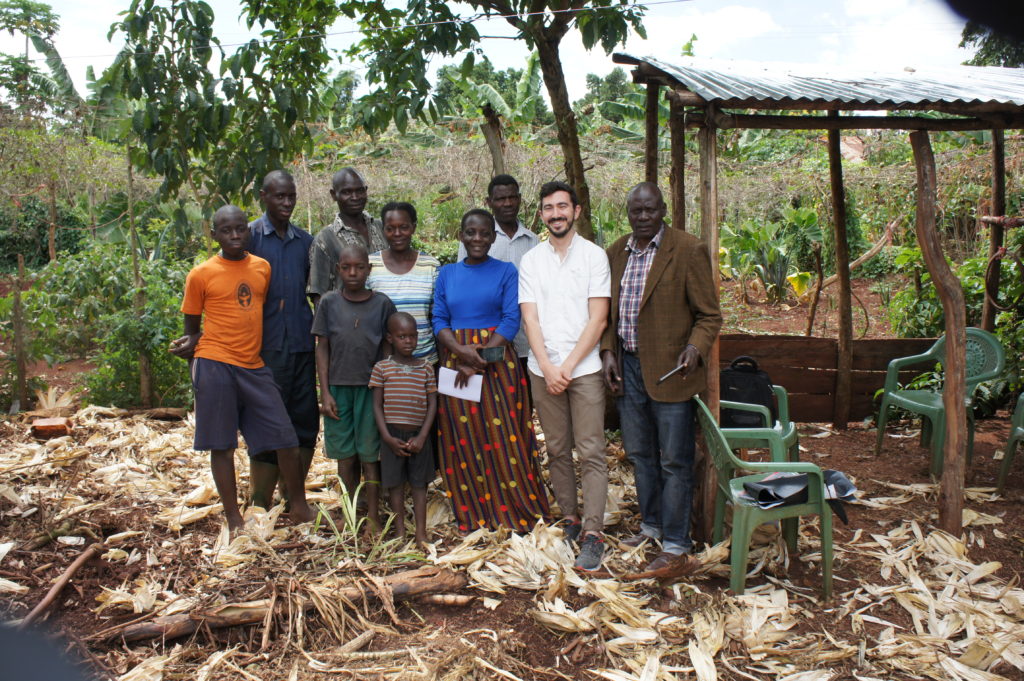 “It’s a David and Goliath battle that just won’t end,” one activist told me as he described the struggle over GMOs in Uganda. I had come to Uganda for a week to continue my research on the ongoing conflict over GMO regulation in Uganda. In a country where more than 70% of people work in agriculture, GMOs are a highly contested issue.

For the past twenty years, Uganda has been involved in a vigorous debate about whether to permit the commercial production of genetically modified crops. Uganda is not alone in this debate. Countries across East and Sub-Saharan Africa are weighing the benefits and potential consequences of agricultural biotechnology as they seek to strengthen their agricultural economies. These local debates are shaped by intense pressure from biotechnology companies and foreign donors who claim they are “starved for science.” Yet so far, they have failed to convince East African publics of the benefits of GMOs. For biotechnology promoters, however, Uganda, is seen as a potential opportunity.

Described as a “poster child” for neoliberalism, the Ugandan government has been actively pursuing the commercialization of agriculture and the introduction of agro-chemical inputs with the hopes of increasing exports. Given this penchant for market-based reform, The Bill and Melinda Gates Foundation and its subsidiary, the Alliance for a Green Revolution in Africa, have been promoting several genetically modified crops, including a “biofortified” banana and “Water Efficient Maize for Africa.”  They hope these crops, which offer benefits beyond typical pesticide-resistance, can serve as emissaries to convince a skeptical public about the value of GMOs.

In October 2017, the debate seemed to be over in Uganda, when parliament passed the Biosafety Act of 2017. The Act was to serve as the regulatory framework to allow commercial production of genetically modified crops, as required by the Convention on Biodiversity. It was assumed that President Museveni, who had voiced support for commercial agriculture and GMOs in the past, would immediately sign the bill into law.

Two months later, however, promoters of GMOs were shocked when he returned the bill to Parliament, raising concerns related to reliability, labeling, and, most importantly, the impact on “ancient crops and livestock.” It is the latter concern—about the impact of genetic modification on indigenous seeds, crops, and livestock—that has proven most resonant in Uganda. Indeed, food is deeply tied up with identity for many Ugandans. The fertile territory, rich with biodiversity in both flora and fauna, is reflected in the country’s culinary and cultural diversity.

Different regions of Uganda all have different staple foods, which are a key aspects of people’s ethnic, regional, and national identity. Agronomic, culinary, and ethnic diversity are thus deeply intertwined.  Ugandan food sovereignty is deeply tied up with cultural and national sovereignty.

Like much of the world, however, Uganda is facing threats to its food sovereignty by issues including climate change, pests, and population growth. Biotechnology promoters suggest GMOs are a silver bullet, developing new crops as the solution to these issues. However, small-scale farmers are developing and sharing innovative practices that not only address these issues, but also draw on indigenous seeds and crops. I thus went to Uganda not only to gain greater insight into this conflict, but also the ways in which small scale farmers are offering a viable alternative to the solutions offered by corporate agriculture.

The Mitiyana district is in the Central Region of Uganda, about 48 miles from Kampala. There, agriculture remains the main source of employment. Members of the East and Southern Africa Alliance of Small Farmers (ESAAF) are one of the key organizations that help to provide support and capacity building for local farmers organizations. There, I met Christine, the District Chairperson for the Mityana District of ESAAF. A small-scale farmer herself, she chaperoned me through the district to show me how farmers are developing solutions to the problems of climate change and pests. Though they have little money, they are rich in knowledge of agriculture and common resources.

The first farm, Chosen Farm, belonged to Champad Andrew. Andrew purchased the land several years ago and now lives with his wife and four children on the farm. He told me that he chose the name “Chosen Farms” because his decision to farm was a choice – one he takes very seriously. Indeed, Andrew’s farm is a beacon for the area, a “teaching farm” as another farmer told us, since he is constantly developing innovative, low-cost, and sustainable technologies to share with local small-scale producers.

Andrew’s farm is a catalogue of small-scale technologies that help him efficiently use energy, add value to crops, and recycle nutrients on the farm. For example, Andrew built the stove pictured that heats multiple burners and uses very little wood (since collecting firewood is a very time-consuming task). He learned how to make the stove at a workshop out of materials that were all extremely low cost. He also created homemade Ecosan toilets. The toilets collect waste, which are then processed for curing banana trees and for organic fertilizer. He also made a homemade food dehydrator to create value-added products, like dried bananas which he bags and sells. 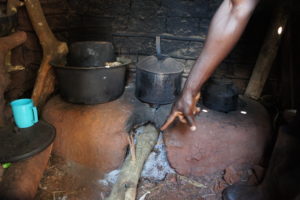 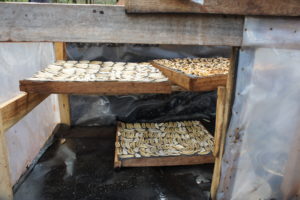 Chosen Farm’s primary crop is matoke, the East African Highland Banana. Matoke is the staple food for Ugandans in the Central Region. Eaten mashed with a gravy of groundnut sauce, it is a beloved food.  Andrew chose to grow the matoke for this reason—he can sell the bananas to his neighbors and to local markets. Since getting crops to market is a challenge for remote small-scale farmers, growing a local staple crop provides some economic and food security.

Matoke, of course, is the crop that has been slated for intervention by the Gates Foundation. Because it is a staple food, Gates has poured millions of dollars into developing a GMO biofortified banana that is supposed to provide increased levels of Vitamin A. This has proven extremely controversial. Gates has also supported the development of another banana that is resistant to banana bacterial wilt.

Andrew doesn’t struggle with the issues that the GMO bananas claim to solve, however. First, Andrew’s farm, like most Ugandan farms, is intercropped with lots of other food and medicinal crops. Many of these food crops and fruits are excellent sources of Vitamin A and other nutrients. Second, Andrew doesn’t suffer from banana wilt because of his agroecological practices. To combat banana diseases, Andrew uses the urine from his Eco San toilet which he mixes with chilis and stores to cure the banana plants. He also mulches around the banana trees to ensure soil moisture.

In reality, diseases aren’t what that worries Andrew, it’s climate change. Droughts have been common in the area and he doesn’t have a well on his land. Even those with wells have seen the water table drop. Uganda does not want for water; It is filled with freshwater. Still, only 3% of Ugandan agriculture has access to irrigation. Hence climate change is a real worry for farmers (another reason why the Gates Foundation supports such “climate smart” genetically modified crops such as “Water Efficient Maize for Africa” or WEMA).

Farmers have also turned to agroecological tools to combat climate change. For example. farmers have also trained each other in agroecological practices such as mulching. By using banana leaves and other plant detritus as mulch, farmers are able to retain moisture in the soil. Local farmers’ organizations are also encouraging farmers to plant trees that help to provide shade, moisture, and combat climate change. 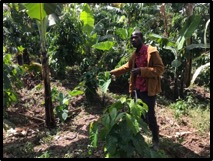 Another way that farmers cope with climate change is through crop choice. Specifically, local farmer organizations have been collecting, sharing, and selling local drought-resistant seeds for crops—such as yams, sweet potatoes, and cassava. Some can stay in the ground for up to ten years before they are eaten. These “food security crops” provide insurance for farmers during times of drought or when they do face crop failures.

Finally, farmers also try to recycle as many nutrients as possible, particularly through intercropping. The diversity on Andrew’s farm was truly stunning; bananas are often intercropped with coffee in Uganda, but Andrew’s farm also includes cassava, medicinal plants, maize, sugarcane, yams, cherry tomatoes, collard greens, pumpkin, and other fresh vegetables. He also has chickens and ducks, which provide waste recycling, fertilizer and meat. 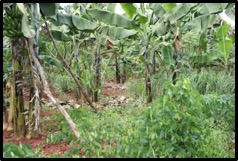 After leaving Andrew’s we continued on in the District looking at various interventions and programs of ESAFF. One of the major goals of Christina, ESAFF District Chair for Mityana, is to work with young people in the region and to get them excited about farming. Part of this effort is to help them find employment and income off the farm. One of the projects that they have been encouraging is to make bricks. Brickmaking requires relatively few resources, but the constant demand offers a source of cash to supplement farming. 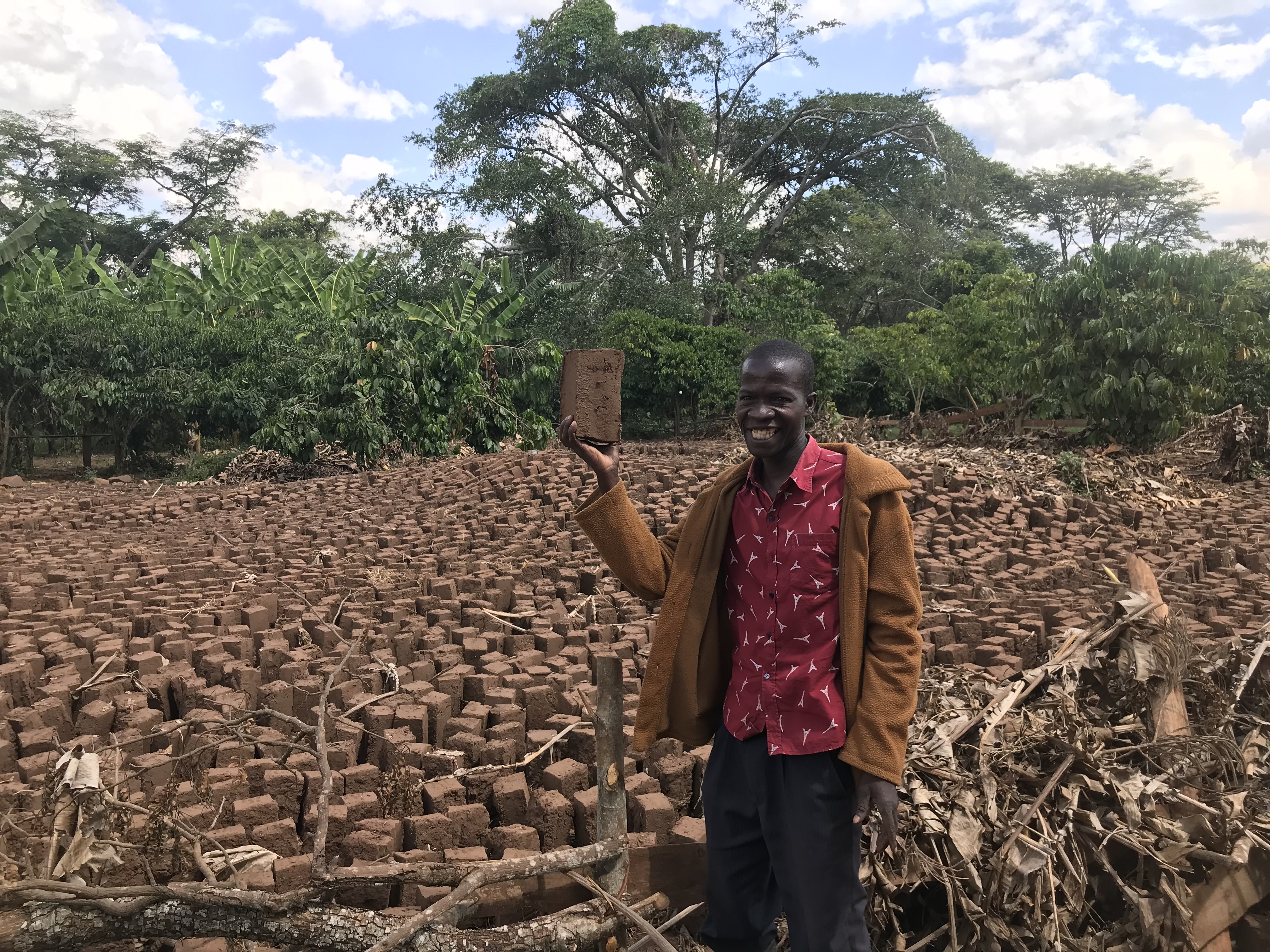 We continued on to the Kikandwa Environmental Association. Started by Kaganga John in 1999, KEA serves as a community school, resource center, and demonstration area for nearby farmers. Kaganga John co-founded the area on his family land upon returning from Kampala to see his neighbors facing food insecurity and a lack of trees. Today, the Association trains young farmers and children, using agroecological practices.

One of the things that KEA emphasizes is the incorporation of animals into farming systems. John described cows as “fertilizer machines.” Whereas Andrew had used Eco-San toilets, KEA has cows and goats.  These not only provide fertilizer, they are also stores of value for farmers between seasons. 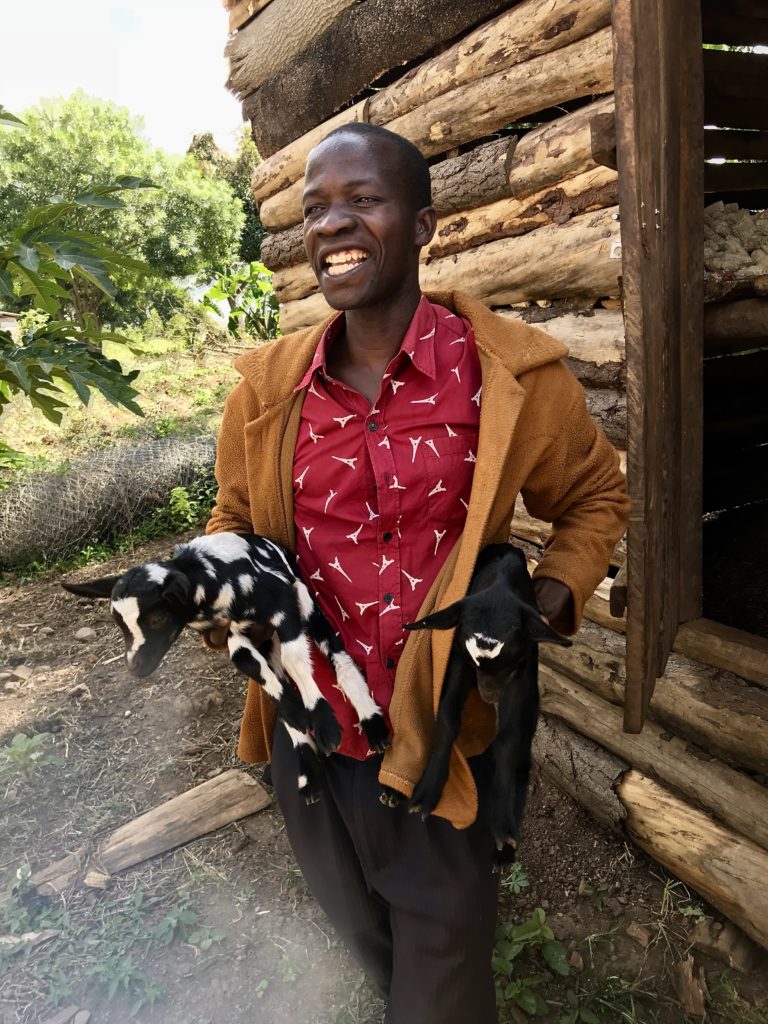 KEA is also experimenting with other projects, like keeping bees for honey. They consume some of the honey and sell the rest. 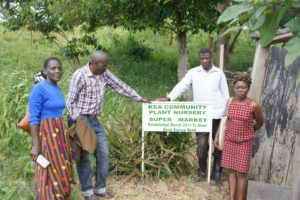 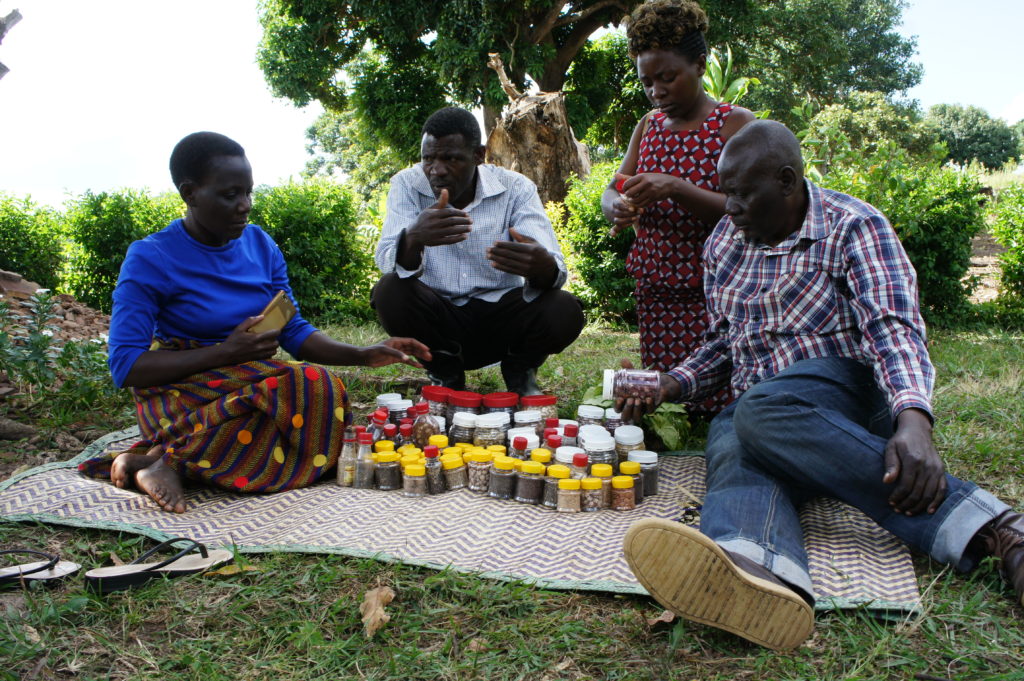 Finally, the Association’s most recent project is a plant nursery. The nursery is part of a local effort to protect indigenous seeds as well as to find local cultivars that are resistant to climate change. KEA has been collecting seeds for trees, vegetables, medicinal plants, and other crops and growing them out continuously in their “Plant Nursery Supermarket.” To date, they estimate that they have given away 30,000 seeds and plants to farmers nearby. This practice of seed saving and cataloguing within the local area is perhaps the heart of KEA’s work. While all of the projects are important contributions to the livelihoods and education of the people in the village, the protection of indigenous seeds serves to protect the work of generations of farmers who have developed cultivars that fit the local context. These seeds remain the heart of food sovereignty, but also those that are most under threat.

The Praxis of Agroecology

Agroecology is both a movement and a set of agricultural practices deeply tied to food sovereignty. Stephen Gliessman describes agroecology as “the ecology of the food system. It has the explicit goal of the transformation of food systems toward sustainability where there is a balance between ecological soundness, economic viability, and social justice.”. The farmers of KEA and ESAFF practice agroecology to sustain their livelihoods, their soil, and their communities. Through agroecological practices they are rejuvenating indigenous practices that provide not only food security, but food sovereignty. Indeed, for the farmers I met with, food sovereignty is not simply about their livelihood, it is about control over their land, cultural practices, and food.

While farmers are active in sharing knowledge and resources, to grow agroecology, they also need support. Although over 70% of people in Uganda work in agriculture, state support for agriculture has been rapidly diminishing. In 2017-18, Uganda only spent only 3.8% on public support for agriculture. Rather than spending public funds, the Ugandan government has pushed the agenda of the Green Revolution and commercializing farmers. This has meant decreasing support for small-scale farmers and opening up markets to agro-industrial corporations who are promoting products such as genetically-engineered seeds.

Ultimately, controversy over GMOs in Uganda is about much more than biosafety; it is a debate about rural development and the future of small-scale farming. As the farmers of ESAFF and KEA demonstrate, small-scale farmers are innovative producers with deep knowledge of their land and territory. For these farmers, agroecology offers a path forward.