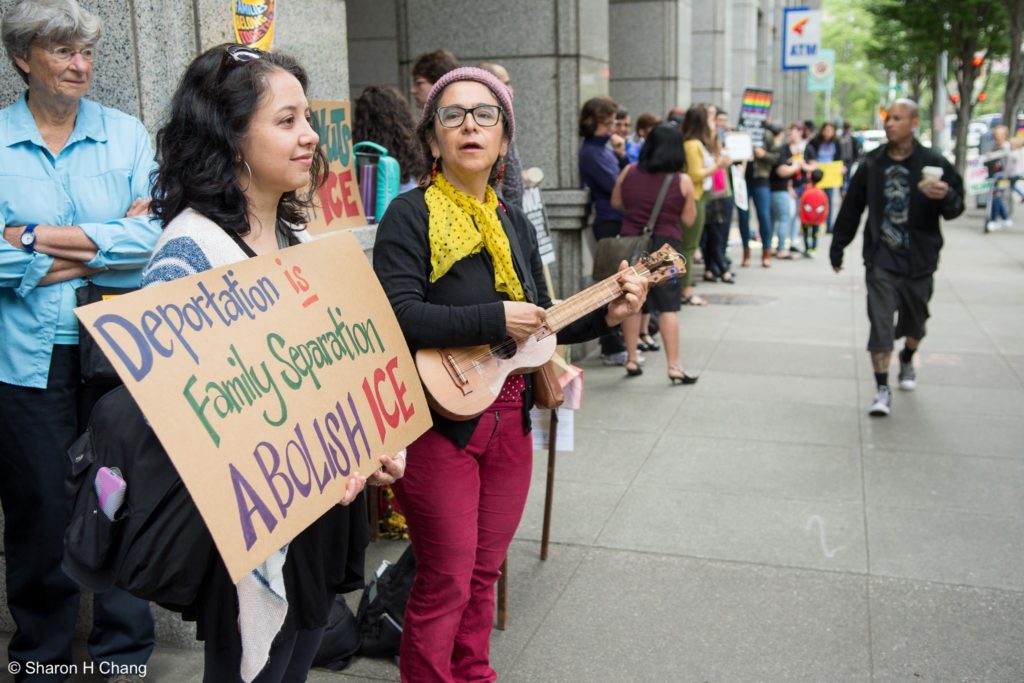 Join us for daily week-day (M-F) VIGIL FOR HUMAN RIGHTS in front of the Seattle ICE office, 1000 2nd Ave (between Spring and Madison in downtown Seattle). At this time, daily vigils are planned until July 20; we will announce here and on Facebook if we decide to extend. Learn more and follow updates on Facebook.

In response to the recent escalation of repression of immigrants and refugees, CAGJ has been helping to coordinate daily vigils at the Seattle ICE office. Often our southern neighbors are forced to leave their countries in search of a better life due to the instability caused by US policy, including NAFTA and CAFTA. As Food Sovereignty activists, we organize for immigrants’ rights, and defend the workers that feed us, from the fields to the kitchens of the majority of restaurants. We reject the racist and inhumane “zero-tolerance” policy, and stand with the movement calling to Keep Families Together. We believe we must abolish ICE, and end the system of imprisoning immigrants in profit-making private detention centers.

We are a group of concerned human beings who gather every day in front of the Seattle offices of Immigration and Customs Enforcement (ICE) and Customs and Border Protection (CBP).

Many of us are here from 8 to 10 am every workday, but we encourage people to come any time between 8am and 6 pm, or later. Bring your friends. Bring a sign if you can. Our goal is to be a constant visual reminder that we repudiate ICE’s/CBP’s activities. Our presence is peaceful and we are not engaging in civil disobedience.

Every day at this address, ICE and CBP agents report to work, and immigrants arrive for hearings at the Seattle Immigration Court on the 25th floor. ICE’s lawyers are on the 29th floor; its investigators, who work in joint task forces with Seattle Police and the King County Sheriff under the name of “Homeland Security Investigations,” or HSI, are on the 23rd floor. CBP, also known as the Border Patrol, has its Seattle field office on the 22nd floor. There are also other offices in the building unrelated to immigration enforcement.

The U.S. government continues to subject migrants and refugees to an organized campaign of cruelty and abuse. For years, it has broken up families, detained migrants in inhuman conditions, and frustrated the right to asylum. Under President Trump, it has seized children from parents, threatened migrant families with indefinite detention, declared victims of gang violence and domestic violence ineligible for asylum, and slashed the number of refugee admissions. These policies are accompanied by a rhetoric of hate targeting migrants and refugees.

Our government’s policies, implemented by ICE and CBP, violate fundamental rights to asylum, due process, and family life. They cause anguish, terror, and lasting psychological harm. They threaten the safety and well-being of children. We will not rest until our government respects the human rights of migrants and refugees.

HOW YOU CAN TAKE ACTION
1. Contact your Congresspeople, and encourage friends and family in other states to do the same. Call 202-224-3121 to be connected.

4. In Seattle, join daily vigils at ICE office, and help publicize the vigils.