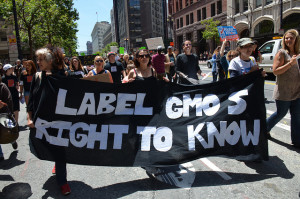 Vermont is about to become the first state with mandatory GMO labeling, but Monsanto and their friends are scrambling to pass a bill through Congress to overturn Vermont’s progress and prevent real GMO labeling for the rest of us. This bill is a sham and a disgrace — but the vote’s going to be close. Will you send a message to your senators, even if you have before?

If passed, the Senate “deal” would:

*Pre-empt state authority (ie nullify Vermont’s GMO labeling law which is the first legislation of its kind in the nation, to take effect July 1)

*Establish a complex federal bioengineered food disclosure system creating three “options” for labeling GMO ingredients – barcodes, QR codes, that would have to be accessed by smartphones to find more information about the product, and a symbol created by USDA or an actual on-package statement that the product contains GMOs.

(1) The definition of “bioengineering” is  so narrow that it would exclude virtually all the GE products now on the market as being “bioengineered,” since the definition exempt rDNA traits “for which the modification could not otherwise be … found in nature.” It is unclear whether this was intentional or a mistake.

(2) The USDA will get to suggest the level of GE content that will trigger labeling, e.g. set a tolerance or threshold:  “Sec. 293. ESTABLISHMENT OF NATIONAL BIOENGINEERED FOOD DISCLOSURE STANDARD … (b) REGULATIONS …(2) … (B) determine the amounts of a bioengineered substance that may be present in food, as appropriate, in order for the food to be a bioengineered food.”  Indeed, the bill seems to realize that the various exemptions are extensive, since another part of the bill says that just because a food is not required to be labeled as “bioengineered” it cannot be labeled as “non-GMO’:  Sec. 294. SAVINGS PROVISION … (C) OTHER–A food may not be considered to be ‘non bioengineered’, ‘non-GMO, or any other similar claim describing the absence of bioengineering in the food solely because the food is not required to bear a disclosure that the food is bioengineered under this subtitle.”  So, this means that the Non-GMO project labels will still exist.

(3) The exemption of state laws refers to both food and seed so that means not only is Vermont Law120 exempted, so is the requirement that GE seed data is made public and gathered by the state, effectively getting rid of 2 Vermont laws in one fell swoop:  “Subtitle F–Labeling of Certain Food  SEC. 295.  FEDERAL PREEMPTION … (b) FEDERAL PREEMPTION No State or a political subdivision of a State may directly or indirectly establish under any authority or continue in effect as to any food or seed in interstate commerce any requirement relating to the labeling of whether a food (including food served in a restaurant or similar establishment) or seed is genetically engineered (which shall include such other similar terms as determined by the Secretary of Agriculture) or was developed or produced using genetic engineering, including any requirement for claims that a food or seed is or contains an ingredient that was developed or produced using genetic engineering.”

(4) The bill actually appears to forbid companies who are using a QR code from also from also using words such as “genetically engineered“, since the bill notes “Sec. 293.ESTABLISHMENT OF NATIONAL BIOENGINEERED FOOD DISCLOSURE STANDARD (d) DISCLOSURE.–In promulgating regulations under this section, the Secretary shall ensure that–(1) on-package language language accompanies–(A) the electronic or digital link disclosure, indicating that the electronic or digital link will provide access to an Internet website or other landing page by stating only ‘Scan here for more food information’ or equivalent language that only reflects technological changes.”