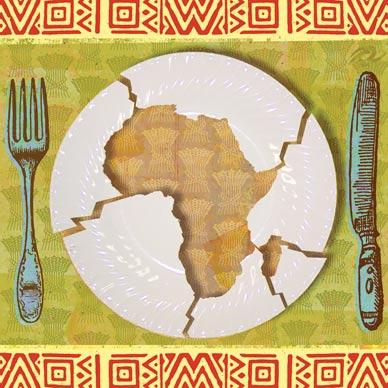 Research by two CAGJ activists involved in the AGRA Watch project, which is monitoring and questioning the Gates Foundation-funded Alliance for a Green Revolution in Africa, was cited by three internationally recognized writers on the global food crisis in the Nation magazine in September (issue on the newsstands by Sept. 21).  In the article titled “Ending Africa’s Hunger”, Raj Patel, Eric Holt-Gimenez, and Annie Shattuck put forth an argument about the “conventional wisdom” surrounding the global food crisis:  namely, that the conventional wisdom is wrong, especially considering the focus on Green Revolutions past and present.  Following the money and ideological influences, Patel, Holt-Gimenez, and Shattuck cite Travis English and Paige Miller of CAGJ:

Travis English and Paige Miller, researchers with the Seattle-based Community Alliance for Global Justice, have uncovered some striking trends in Gates Foundation funding. By following the money, English told us that “AGRA used funds from the Bill and Melinda Gates Foundation to write twenty-three grants for projects in Kenya. Twelve of those recipients are involved in research in genetically modified agriculture, development or advocacy. About 79 percent of funding in Kenya involves biotech in one way or another.” And, English says, “so far, we have found over $100 million in grants to organizations connected to Monsanto.”

Great work, Travis and Paige!  The article should be required reading, and is a part of the Nation’s Sept. 21st edition focusing on “Food For All: How to Grow Democracy“.

The Gates Foundation did defend AGRA via letter to the Nation, which we’ve included below along a response from the article’s authors.

The Gates Foundation and Africa’s Hunger
By Mark Suzman
September 15, 2009

At the Bill & Melinda Gates Foundation, we believe an open exchange of ideas
is essential to tackling urgent global challenges. Our approach to
agricultural development recognizes hunger is a complex challenge with no
single solution.

It is unfortunate that the authors of “Ending Africa’s Hunger” chose to
mischaracterize the foundation’s strategy, despite our detailed and frank
conversations with them.

We support a broad range of solutions. In addition to quality seeds, small
farmers need locally appropriate farming practices, access to markets and a
policy environment that supports their success. We invest in all of these
areas.

Environmental sustainability is critical for long-term impact. That is why
we fund projects like microirrigation efforts for efficient water use and
planting legumes among other crops to fertilize the soil naturally. We also
recently made a grant to the Worldwatch Institute to undertake a
comprehensive study of the highly complex intersection between the
environment and agriculture.

Women do the majority of the work on farms in Africa, and successful efforts
must also take their needs into account. To that end, we have funded a major
career development program for sub-Saharan African women in agricultural
research, and another to engage women farmers in agricultural policy
development.

Our agricultural work is focused on helping small farmers, who make up a
majority of the world’s poorest people, to live healthier, more productive
lives. The “uniquely African Green Revolution,” called for by African
leaders in 2004, recognizes that reducing hunger and poverty begins with
such farmers and their families, and that is why we and our partners are
continually working to ensure their voices are heard and their needs are
met. Ultimately, it will be up to countries and farmers themselves to decide
what approaches are right for them.

A detailed overview of our Agricultural Development strategy is available
online.

Thank you for your response to our article. We agree that an open exchange
about Africa’s agricultural development, and the philanthropic interventions
to shape it, is tremendously important. We welcome the chance to continue
the debate here.

We’re grateful that you made the time to talk with us for over an hour in
Seattle, and to respond to our questions in e-mail, but we note that there
seems to be nothing specific in our article with which you disagree–for
example, the market-oriented approach, the structural issues around gender
and the process of “land mobility,” in which Africans will lose their land.
You seem unhappy that we didn’t faithfully reproduce your public relations
materials, which readers can indeed find on your site, but our job isn’t to
simply reproduce your website. Rather, we strove to put your projects in
context, revealing the industrial connections that the foundation fails to
make evident on that site.

We note that, yes, the Gates Foundation funds the planting of beans and
microirrigation. But as a proportion of disbursement, these projects are
marginal to the technological investments in the development of genetically
modified crops. That is why we couldn’t in good conscience report the more
trivial examples as representative of the organization’s broader thrust.

We’re happy to add The WorldWatch Institute to the list of organizations in
the United States that the Gates Foundation funds. We’re disappointed,
however, that in choosing to fund them, the Gates Foundation did not consult
with the farmers’ organizations and NGOs in Africa that for more than twenty
years have been doing excellent agroecological work raising production,
reducing environmental costs and improving livelihoods on the continent. The
complex links between agriculture and the environment have been extensively
documented and peer-reviewed. Wouldn’t the money have been better spent
supporting the dissemination of this proven knowledge within Africa?

We agree that it will ultimately be up to farmers to decide what is best for
them. Our concern continues, however, to be that the choices farmers face is
systematically skewed, with some ideas being amplified over others. Any
policies that involve redistribution–such as land reform–are off the Gates
agenda, despite being a live concern to many African farmers’ movements.
This demonstrates our broader point. Despite the foundation’s best efforts
to be accountable once the policy has been laid down, the Gates Foundation’s
interventions reflect, at heart, the undemocratic vision of a single very
powerful and ultimately unaccountable organization.