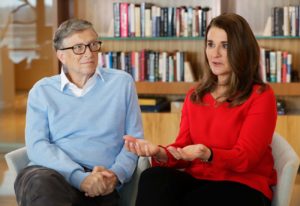 Tim Schwab is a freelance journalist based in Washington, DC, whose investigation into the Gates Foundation was part of a 2019 Alicia Patterson Foundation fellowship. This report was published in The Nation on March 17, 2020.

According to Tim Schwab in The Nation article “Bill Gates’s Charity Paradox“, the Gates Foundation uses “all the tools of capitalism” to “connect the promise of philanthropy with the power of private enterprise.” Schwab looked at 19,000 charitable grants the Gates Foundation has made over the last two decades and found close to $2 billion in tax-deductible charitable donations made to private companies. Among these, a $250 million donation given to media companies and groups to influence the news with a clear ideological agenda. Additionally, close to $250 million was identified in charitable grants made to private companies where the Gates foundation holds corporate stocks and bonds, raising the underlying question as to whether these donations are providing the Gate’s Foundation with financial gains.

Through charitable giving to private companies, Gates is suspected of avoiding more taxes than anyone else, amounting in billions of dollars that otherwise could be a public subsidy.

The Gates Foundation has made notable donations to groups that push for industry-friendly governmental policy and regulations, and often “Gates’ ideological interests overlap with his financial interests.”

In the case of Gates’ influence on the pharmaceutical industry, the foundation is known for pushing a pro-patent agenda, making life-saving drugs unaffordable in low resource countries. Schwab emphasizes that Gates’ push in the pro-corporate direction ultimately contradicts his charity efforts to fight poverty.

The foundation’s “strategic investment fund” is another area of concern, where “the Gates Foundation explicitly marries its investing and charitable activities.” This fund includes a $7 million equity stake in the company AgBiome, whose other investors are agrochemical companies Monsanto and Syngenta, also highlighting Gate’s pro-corporate agenda.

Schwab describes Gate’s charitable giving as creating a “blinding halo effect around his philanthropic work, as many of the institutions best placed to scrutinize his foundation are now funded by Gates.” The increased lack of scrutiny has made the Gates Foundation a major player in informing public policing, proving that “philanthropy can buy political influence.”

The moral hazards of the Gates Foundation raise the following questions highlighted by Schwab: “Do billionaire philanthropists have too much power, with too little public accountability or transparency? Should the wealthiest Americans have carte blanche to spend their wealth any way they want?” The complex answers to these questions will have an impact in mainstream politics.