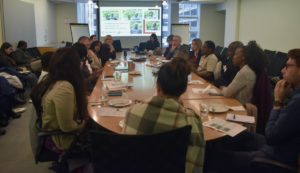 In early January Cornell’s Alliance for Science (CAS) Global Leadership Fellows met with the World Bank, one of the world’s most powerful financial institutions for financing development initiatives, to advise on increased funding for CAS scientific research and communication priorities in Africa.

Included in the fellows’ proposals was to invest in “science communication” around agricultural biotech, such as genetic engineering and gene editing.

“Journalists need to accurately spread the message about technological advances being developed to mitigate these challenges. Journalists need to be trained in effective science communication, so their stories make communities better instead of retarding development,” stated CAS fellow and Kenyan journalist Rose Mukonyo.

CAS fellow and Zimbabwean scientist Nyasha Mudukuti hopes that the proposed increased funding will raise the accessibility of biotechnology to African agriculture workers, and with profits made through investments in biotechnology, small farmers will benefit. Along with increased funding, CAS fellows voice for the World Bank to prioritize climate change and prioritize the interests of women.

While the proposals made by CAS fellows seem promising at the surface, it is important to look deeper into the credibility of CAS in making decisions for the people, and advising the World Bank on funding priorities for agricultural development in Africa. To begin, the CAS serves as one of the leading biotechnology propaganda organizations in the US due to its push for pro-GMO narrative and focus on training communication specialists and journalists. CAS was funded by the Bill & Melinda Gates Foundation which invests in biotechnology instead of community-driven agroecological farming methods. As a training program, CAS works to advance this pro-GMO agenda, and the profit-driven interests of the biotech industry, therefore it becomes questionable that these proposals will work to benefit African Agriculture workers.