Save Our Food. Free the Seed.
Written by Dan Barber for The New York Times
Summarized by Becca Fogel

In 2018, Monsanto, the largest seed producer in the world at the time, was acquired by German company Bayer, making it the world’s largest agrochemical and seed company. Today, four companies, Corteva, ChemChina, Bayer and BASF, control over 60% of the world’s seed sales. These same companies also sell more than 60% of the world’s pesticides.

Last year, more than 90% of the almost 200 million acres of corn and soybeans planted in the US were from genetically engineered seeds. When Bayer acquired Monsanto in 2018, the company also captured the patents on the genetically modified traits Monsanto owned, restricting innovation and narrowing choices for farmers and consumers. These seeds are designed for large-scale monoculture and require specific chemical fertilizers and pesticides to meet their desired yields, allowing Bayer to capture the markets of the entire input system of seeds, fertilizer, and pesticides. 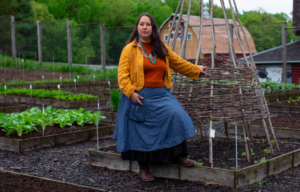 Rowen White visiting the Seed Savers Exchange in Decorah, Iowa. Ms. White sits on the board of the organization, which is growing several varieties of seed that can be traced back to indigenous growers.

Large seed companies keep getting bigger, yet we now know that organic farming reduces the use of harmful chemicals, improves the soil’s ability to sequester carbon and retain water, and strengthens biodiversity. A community of farmers, gardeners, activists, and independent seed companies are still continuing traditions of seed saving and improvement through open source seed production. As the climate grows more severe and unpredictable, we will need seeds bred and adapted for their environments — precisely what the centralized, chemical-driven industry is not built to provide.

These efforts need more than our support; they demand our participation, the same engagement with seeds that humans had for thousands of years. Seeds not as commodities but as a vital part of our cultural commons; seeds not as software, but as living systems: seeds as the source of a new food revolution.