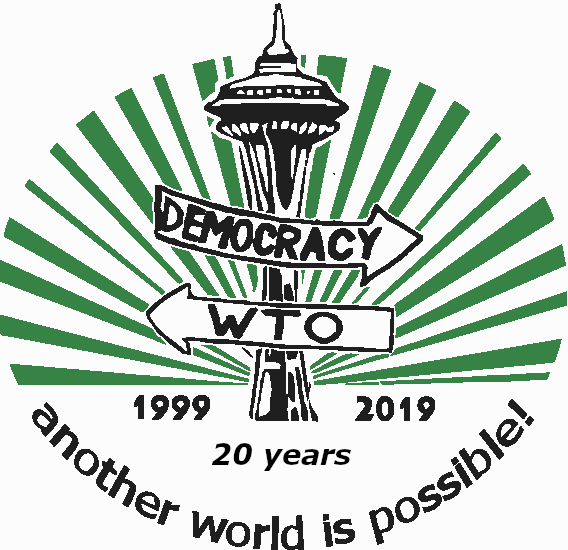 On 20th Anniversary of Battle in Seattle, Activists Honor History and Today’s Movements

SEATTLE, WA November 25, 2019 – This Saturday November 30th marks twenty years since the historic grassroots uprising that shut down the World Trade Organization ministerial meetings in Seattle. On November 30th 1999, over 50,000 people took to the streets, some marching, and many engaging in peaceful civil disobedience to call attention to the WTO’s failed policies that impact the everyday lives of working people, pollute our environment and undermine farmers around the world. Through coordinated action, activists successfully blocked the opening sessions of the ministerial on November 30, and a few days later the WTO talks collapsed. Now, two decades later to the day, organizers from 1999 and leaders of today’s movements are gathering to honor this history and trace the lineage to today’s struggles for justice. The event is free and co-organized by Community Alliance for Global Justice, United Food & Commercial Workers Local 21, and Town Hall Seattle.

The WTO+20 gathering will recognize the role of direct action in achieving social change across time. One hundred years ago, in 1919, over 65,000 workers from over 100 unions withheld their labor during the Seattle General Strike. Initially an employer attempted to divide skilled and unskilled shipyard workers, igniting the strike, which demonstrated the power of working people united for a common cause.

“A hundred years later teachers, coal miners, auto, grocery, healthcare and many other workers still know that one of the most powerful ways we can advocate for change in the workplace that benefits our communities is by disrupting the status quo,” explained Faye Guenther, President of UFCW 21. Participating in the People’s Shut Down of the WTO twenty years ago, we felt the power of putting our bodies on the line alongside our community to stop the advancement of inequity. This is why UFCW 21 is honored to sponsor this WTO+20 celebration, intersectional sharing, and strategic opportunity to raise up direct action throughout our diverse movements.”

“When we look back at why we were protesting the WTO in 1999, we see that we were right to shut it down on November 30th: neoliberalism and unfettered capitalism continue to have devastating consequences for Mother Earth and her people around the world,” explains Heather Day, Director of Community Alliance for Global Justice, a grassroots food justice organization she co-founded with other organizers of the 1999 protests. “To repair the planet, it is more urgent than ever that we find inspiration in the victories of 1999: when people join together and take direct action, we are powerful,” says Day.

A morning panel will kick-off the event, featuring Deborah James, coordinator of Our World Is Not for Sale Network; Nancy Haque of Basic Rights Oregon; Lisa Fithian, author of Shut it Down: Stories from a Fierce, Loving Resistance; and Edgar Franks, farmworker organizer with Familias Unidas por la Justicia (FUJ) who will share stories of what took place in 1999. The panel will then turn to Paul Cheoketen Wagner, Founder of Protectors of the Salish Sea, Ramon Torres, farmworker organizer with FUJ, and other guests about how direct action is utilized by today’s movements to achieve victories. In the afternoon, participants can attend a training on Escalating Resistance and Mass Rebellion with Lisa Fithian, or choose between three movement-building workshops: Seattle’s Green New Deal with Matt Remle (Lakota), co-founder of Mazaska Talks, and Alec Connon, 350Seattle; Campaign to permanently shut down the Northwest Detention Center in Tacoma, with Ashley Del Villar and Fletcher Christie from La Resistencia; and A new global economic constitution written by Amazon? What’s happening in the WTO and what can we do about it, with Deborah James. Art and music will be featured throughout the day, including screen-printing and theater with David Solnit, Direct Action Network organizer in ’99 and North American Arts Organizer, 350.org, and music with Correo Aereo and Jim Page.

“Twenty years after the Seattle protests, the impacts of the WTO has proved its critics right: trade has increased but wages and incomes are flat, inequality is surging, and developing countries – except those that have benefited from trading with China – have not been able to close the gap with rich countries. WTO boosters who are worried about the crisis in the system would do well to realize that the real crisis is the millions of people suffering from harmful WTO policies on agriculture, medicines, the environment, and labor rights among others,” says Deborah James, who continues to track the WTO. “Rather than tinkering at the edges of the dispute mechanism, or negotiating rules to give the future economy away to Big Tech for free, we need to address the fundamental problems with the failed rules of the WTO and implement a Global Green New Deal.”

Many events are being organized locally and nationally for the WTO Shut Down Anniversary. On Saturday, December 7th, Washington Fair Trade Coalition will host a rally and march starting at 10am at Occidental Park, featuring street theater and music; followed by an afternoon of workshops at Town Hall with a keynote from Nobel laureate economist Joseph Stiglitz and Lori Wallach, director of Global Trade Watch. In Houston, TX, Indymedia is organizing an anniversary gathering and gallery exhibit showcasing 20 years of historical independent media archives.

Media is encouraged to attend the Town Hall event on November 30th to hear directly from social movement activists on the ground then and today.