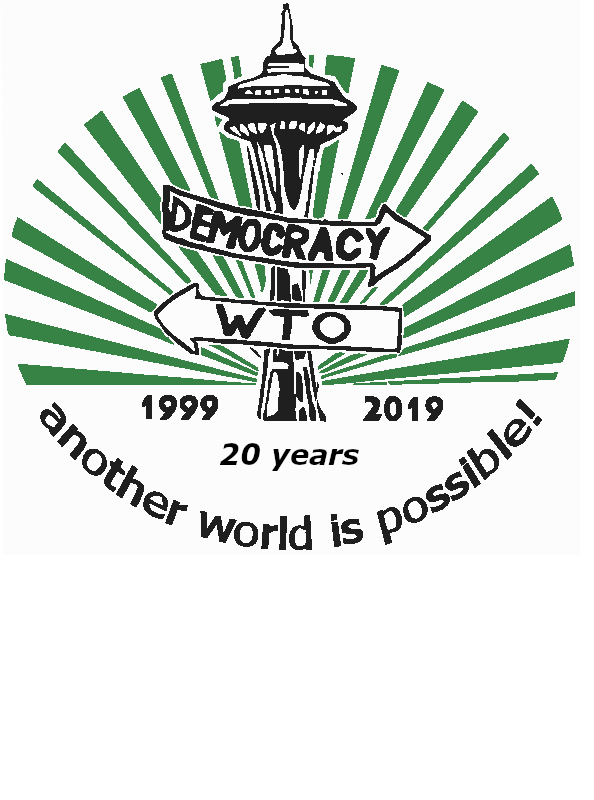 Today in Seattle, and around the world, social movements are taking to the streets, striking, locking down, and engaging in multiple forms of direct action. These tactics build collective power to transform the intersecting crises of our times into opportunities for equity, healing, and sustainability.

In 1919 over 65,000 workers with held their labor during the Seattle General Strike; in 1999 over 50,000 people took to the streets of Seattle, and shut down the World Trade Organization’s conference.

In 2019 we gather to honor this history, and the power of non-violent direct action, through story-telling, trainings, and movement-building workshops, to make another world possible.  Activists who were part of the mobilization will share stories and lessons learned from the people’s movement which made history by successfully preventing the WTO – one of capitalism’s most powerful global institutions – from further consolidating its power.

And we will hear from leaders of today’s movements for justice, from Washington farmworkers to global alliances. Join the WTO+20 gathering for hands-on direct action training, arts workshops, story-telling, and opportunities to plug into local organizing! Let’s inspire action to change the world!

9AM Doors Open: Community Tabling Fair, Live Music with Correo Aereo and a Cantastoria will be performed, a musical giant painted-picture story: “WTO to GND: WTF!”, by David Solnit & musicians

Paul Cheoketen Wagner, Founder of Protectors of the Salish Sea

Lisa Fithian, Author of Shut It Down: Stories from a Fierce, Loving Resistance

Deborah James, coordinator of Our World Is Not for Sale Network

4:00 – 5:00   CLOSING: Commitments to Building Another World and Music with Jim Page

Community Partner: For groups who decide to not Co-Sponsor:

About the 1999 WTO Protests

Short Article: 7 Ways the Battle of Seattle Changed the World: Ten years later, the protests of 1999 are still having an impact, by Fran Korten, Yes Magazine

Documentary film: This is What Democracy Looks Like, cut from the footage of over 100 media activists; Film website.

Why Direct Action? by 350 Seattle

A Manual for a New Era of Direct Action, George Lakey

About the slogan “Another World is Possible”

About the 1919 Seattle General Strike