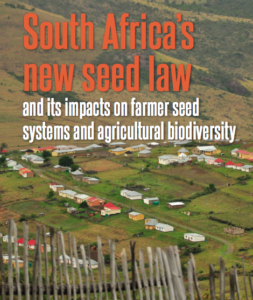 Original Press Release from the African Centre for Biodiversity

The Plant Improvement Act (PIA) and the Plant Breeder’s Rights Act (PBR) were approved by the South African Parliament in October 2018, and were ratified this past March by President Ramaphosa, reinforcing traditions of “historically unequal seed, agricultural and food systems, and strengthens the power of large-scale commercial breeders”. The African Centre for Biodiversity (ACBio) and several farmer associations raised concerns with provincial governments before the bills were approved, but they were overridden in Parliament.

Under the new PIA, smallholder farmers’ ability to maintain and adapt their own seed is in limbo, unregulated and unrecognized. There are 96 crops regulated by PIA but ACBio is uncertain whether these provisions apply to farmers’ varieties; clarifying this issue will enable farmers to freely sell all seed in farmer-managed seed systems. ACBio Director Mariam Mayet explains that farmers’ seed is still impacted by default, as it is excluded from entering South African markets. ACBio is working towards the “recognition, support and strengthening of farmer seed and seed systems that go beyond narrowly defined varieties.”

The new PBR is based on the 1991 International Convention for the Protection of New Varieties of Plants (UPOV), which sets standards for plant variety protection and strengthens breeders’ rights while undermining farmers’. Under the new PBR, breeders can claim ownership over new plant varieties, claiming IP rights for up to 30 years and restricting use until royalties are paid. If South Africa ratifies UPOV 1991, the government will be unable to permit exceptions beyond the narrow interpretations on farmers’ rights.

Contradicting these acts could result in a fine or imprisonment for up to 10 years, yet the constitutionality of these provisions is questionable. Researcher and advocacy officer at ACBio Linzi Lewis states that “social and economic justice needs to include a more equitable distribution of resources and opportunities through stabilising and supporting the expansion of smallholder farmers in diversified agricultural and seed production… At present, in addition to the lack of protection of the rights of smallholder farmers, they receive almost no financial, institutional or political support. Instead, agricultural support policy is oriented towards integrating a relatively thin layer of black small-scale farmers into the commercial sector, mostly through integration into large-scale commercial value chains.” Farmers’ ability to save, use, and sell seed is essential to the ongoing evolution of crop diversity, and these new Acts are undermining farmers’ rights and inhibiting this work.