Mark Lynas, a visiting fellow at Cornell’s Office of International Programs at the College of Agriculture and Life Sciences, and a known pro-GM propagandist with the Cornell Alliance for Science, is under fire for non-consensual usage of images of African farmers and their crops.

Dr Eugenio Tisselli – an IT specialist – and Dr Angelika Hilbeck -a biosafety scientist and agroecologist – are the coordinators of a project called “Sauti ya Wakulima” (“The Voice of the Farmers”) which aims to support Tanzanian farmers in creating a collaborative network of shared knowledge. They came across Lynas’ twitter account and recognized an African farmer in the images Lynas were posting. After reaching out to said farmer, it was revealed that they did not give consent and that they were taken wildly out of context. 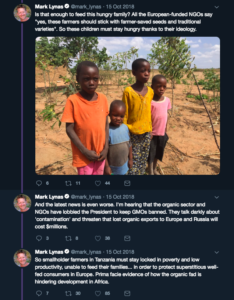 Lynas’ twitter thread about Tanzania’s farmers is misleading and propagandist in nature. He frames GMOs as an answer to hunger and poverty in Tanzania. Simultaneously, hefaults Tanzania and other NGOs for advocating for traditional varieties, citing their ideology as a driver of hunger and poverty in the country.

Lynas’ argument does not only miss the point, it also take poverty out of a relational context, effectively excusing the Global North’s role in the creation of the imperialist and neoliberal policies and structures that created these “problems” in the first place. The use of philanthropy and science as a disguise for capitalist intentions has been a colonial and imperialist strategy from the very beginning and Lynas’ propaganda is no exception.

The complete article further exposes and expounds on Lynas’ actions and its effects on Tanzania.