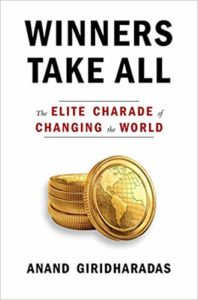 If you are looking for a high-level assessment of current, elite philanthropy I highly recommend Winners Take All: The Elite Charade of Changing the World released in 2018. The book presents a lucid and powerful critique of the market-focused and anti-democratic ideology of much of current philanthropy.

Giridharadas is a former foreign correspondent and columnist for the New York Times and current journalism teacher at New York University. His argument looks at how rich and powerful philanthropists focus on helping the victims of our current economic and political system while failing to challenge this system, which also helped propel these philanthropists into the financial stratosphere.

The press, he points out, portray these philanthropists as good, generous guys (mostly men) merely trying to help. Yet underneath the veneer of being “good guys” their philanthropy is shifting decision making from the democratic public sector to the private sector. Giridharadas argues that the patterns of promoting “thought leaders” and funding programs and approaches which do not challenge the current economic status quo does not address fundamental issues such as income inequality and poverty while diminishing helpful institutions such as labor unions, governmental services, and public education.

Giridharadas labels the ideology of this elite circle, as they travel from privileged conference to privileged conference in Davos, Aspen, etc., as MarketWorld. MarketWorld philanthropy focuses on creating market solutions, that is, money-making solutions to complex social problems, a win-win situation in their minds. The book lays out in detail how undemocratic and self-serving this system is. The slogan “You can do well by doing good” is in line with this philosophy.

The author also discusses the former Clinton Global Initiative (CGI), a now defunct program of the Clinton Foundation initiated and operated by the former President. CGI focused on private-public partnerships. Clinton, and other elite “globalists” which tended to be the big foundations or corporations, were perplexed at the anger of many US and UK voters as evidenced by the Brexit decision and Hillary Clinton’s defeat. Instead of examining structural factors which created so much suffering (dramatic income equality, stagnant wages, the loss of living wage jobs, opioid epidemics, etc.), those elites easily assumed that those angry voters were merely naïve and ignorant not realizing how the good the global markets were for them.

The book does not discuss food and agriculture and genetic engineering issues as that is not Giridharadas’ expertise. While not an academic book either, it is written in a very readable manner full of anecdotes buttressing his argument. Unfortunately, he only mentions the Gates Foundation very briefly.

The author follows the Ford Foundation director, who serves as an example of succeeding despite a disadvantaged background yet the director now coddles the philanthropists and corporatists. The book also tells various stories of philanthropic conferences, high tech business ventures purported to be addressing social problems, and TED talks, including Amy Cuddy’s extremely popular Power Pose talk. Her popularity pretty much ignores her feminist and anti-patriarchal expertise. The popularity of the Power Pose, like the elite philanthropists, focuses on the individual, making women feel more confident by power posing, rather than addressing our system of patriarchy.

Thank goodness CAGJ and its allies are actively addressing the Gates Foundation, its MarketWorld focus, and how this elitist philanthropy is a hindrance, not a help, to addressing the key struggles of our time.