The battle over GMO’s is heating up in Africa, as several countries consider new laws to permit their production. As Uganda’s so-called Biosafety Law faces new challenges, AGRA Watch member Matt Canfield reflects on our transnational campaign to prevent the Super Banana from being grown in that country.

By Matt Canfield, a member of AGRA Watch and an anthropologist currently working at the European University Institute in Florence, Italy. 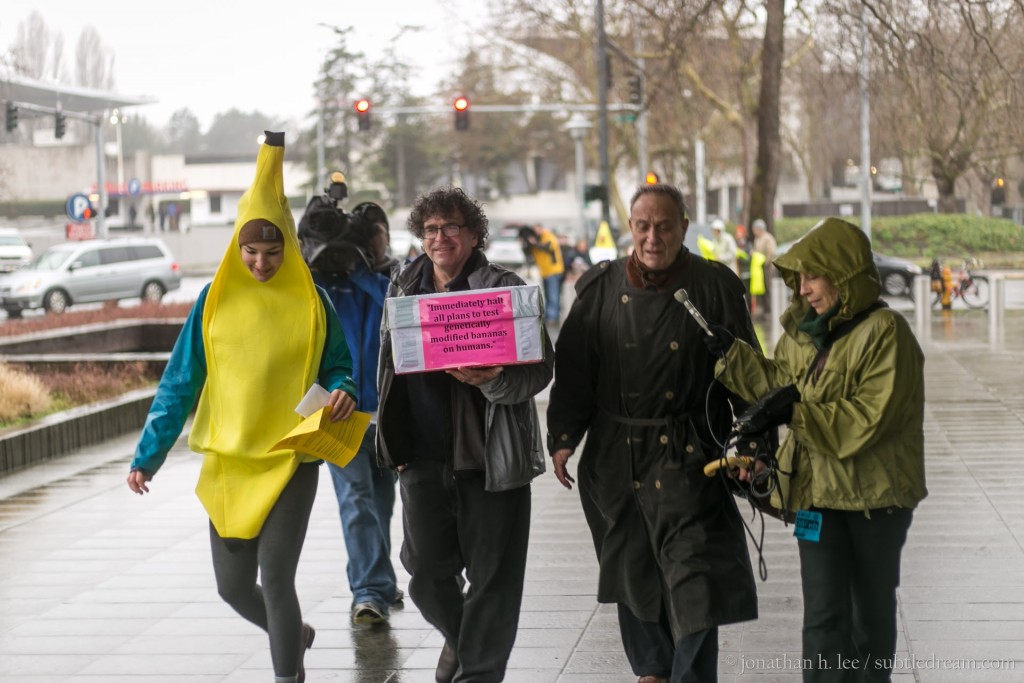 In 2014, AGRA Watch, a campaign of Community Alliance for Global Justice (CAGJ) established a transnational coalition to resist the Super Banana. As its name suggests, the Super Banana is no ordinary banana; it is a genetically engineered, “biofortified” crop funded by the Bill and Melinda Gates Foundation for Ugandan markets. Because the Super Banana contains high amounts of beta-carotene, or Vitamin A, Gates claims that the Super Banana can save hundreds of thousands of children from child blindness. Yet, over two years, CAGJ and its allies raised major challenges about the Foundation’s support for this crop—from its health and safety, to the potential harms that it poses for small-scale agricultural producers, to its disruption to biodiversity. Doing so not only offered a new model for transnational food sovereignty organizing, it revealed important insights into the Gates Foundation’s highly sophisticated efforts to transform African agriculture.

The fact that the Gates Foundation is funding bananas in Uganda is no surprise; it is part of a larger strategy to promote genetically engineering food across Africa. According to some proponents of genetic-engineering, “second-generation” crops (which include benefits for both producers and consumers) have the chance of greater public acceptance. In seeking to build public support for the Super Banana, the Gates Foundation offered the newest front in a decades-old struggle waged by states and corporations from the Global North to transform Uganda’s national laws to permit the commercial production and sale of GMO crops.

Like many African nations, Uganda has been hesitant to allow GMO crops. Only four countries in Africa currently allow the commercial production of GMOs. Western states and corporations have therefore been eager to develop markets for agro-chemicals, industrial inputs, and agricultural machinery by “improving” African agriculture. In 2006, the Gates Foundation became the face of this effort by launching the Alliance for a Green Revolution in Africa (AGRA). To date, it has funded $2 billion towards this effort. Most of that money, CAGJ and its allies have found, has in fact been spent in the Global North, not in Africa, and much of it has gone to scientists, not farmers.

The Super Banana reflects Gates’ approach. First, the Banana was developed by Dr. James Dale at the Queensland University of Technology by combining strains of the East African Highland Banana with the Fe’i variety from Papua New Guinea, an action criticized as potential biopiracy . Then, after developing the Banana, it was sent for testing to Iowa State University, where Dr. Wendy White conducted tests on twelve undergraduate women. These tests were meant to allay concerns about the safety of the Banana, which some scientists worry may actually be toxic.

Finally, to discourage resistance on the basis of political, economic, or cultural grounds, the Gates Foundation created a new institution to frame these products in terms of science. In 2014, the Gates Foundation gave the founding grant to the Cornell Alliance for Science (CAS), “an initiative for science-based agricultural communications that is focused on the global public good.” CAS serves as an academic platform to promote GMOs. Each year, CAS funds a class of fellows to attend a twelve-week program at Cornell to train them in promoting GMOs through “science-based communication.” Of the twenty-five inaugural Fellows, five came from Ugandan NGOs, government agencies, and other organizations.

As the Gates Foundation strengthened its efforts to promote the Super Banana, CAGJ assembled a coalition to resist. The initial participants for the coalition came out of the 2014 Africa-US Food Sovereignty Summit. From there, CAGJ engaged other participants strategically in Iowa, Europe, and Australia. In Australia, for example, CAGJ worked with anti-GMO activists to question Dr. James Dale. In Iowa, CAGJ worked with students at Iowa State University, who raised awareness among the University and local community about ISU’s’s role in promoting the Gates Foundation’s efforts. In Uganda, CAGJ worked with the Alliance for Food Sovereignty in Africa. At the headquarters of the Gates Foundation in Seattle, CAGJ hand-delivered a prop representing the 57,000+ signatures on the petition that asked ISU and the Gates Foundation to cease supporting the transgenic banana study, including human feeding trials, and to change the trajectory for this type of research conducted at public universities.

In October 2017, well before other news outlets picked it up, the Cornell Alliance for Science announced, “Uganda Adopts GMO Law in a Monumental Victory for Science.” The passage of the National Biosafety Act of 2017 was indeed a victory for the Gates Foundation and their corporate allies. The Act marked the end an almost 20-year long process of developing national biosafety legislation. Despite the misleading name of the “Biosafety” Act,  there remains no consensus on GMO safety, and the Act would nevertheless permit the commercial development of GMOs.

Yet Gates and the CAS shouldn’t celebrate too soon. In December, the President returned the Bill to congress, refusing to sign it and demanding greater protection for indigenous agriculture. The Super Banana resistance coalition developed by CAGJ’s AGRA Watch campaign offers a key lesson for transnational organizing in an age of the Green Revolution. By mobilizing activists across the world, each engaged in their own struggles for food sovereignty, CAGJ was able to effectively raise awareness about the potential harms posed by the Super Banana. Not only did this put the Gates Foundation on alert, it showed the vast reach of the Gates Foundation and its efforts to promote its own vision of corporate agriculture in Africa.  CAGJ is committed to continuing to work in solidarity with our African partners, and to exposing the Gates Foundation’s role in pushing their corporate model of agriculture on the continent.