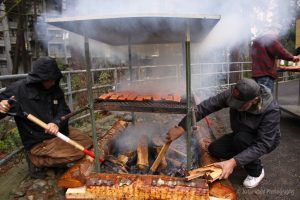 Many of you will will receive our end of year letter in the mail this week. If not, here is what you missed! Thank you for donating generously to CAGJ during this giving season, to help us continue to build the global food sovereignty movement!

We are still basking in the glow of this year’s SLEE dinner, held in October for the first time. We are so grateful that it sold out, and that the packed house got to hear a powerful and very personal keynote from local farmer Ari de Leña. We all needed that nourishing evening, after a difficult year. It has been personally challenging, as Heather was diagnosed with breast cancer in March. And of course we are all contending with a constant barrage of attacks from our country’s administration. Together we have demonstrated fortitude, and felt the need for community like never before. Thank you for helping sustain CAGJ through these tough times!

At SLEE, Emma Shorr, AGRA Watch Co-Chair, spoke about how CAGJ provides her with a political home, and how important this is, “as we build our movements for resistance and resilience together”. CAGJ is proud to play a role in so many movements, from agroecology and food sovereignty, to respect of Native treaty rights, and hopes to offer a political home to many in our communities seeking a way to be engaged in the struggles of our time.

It has been a full year, and we are ready for 2018; we hope you will help us start off on a strong note! Here are some of our top achievements of 2017, thanks to your support.

When we educate, develop leadership, and build movements together, we know we can win. With nearly all of our funding coming from individual donors, we need your support to continue this work.

In the coming months, we will host multiple events, including a premiere of our GE salmon film and a new CAGJ summer school focused on anti-oppression leadership development. We will also look critically at charity and alternative funding models at our Who Profits from Philanthropy? event, which draws on ten years of tracking the Gates Foundation’s agricultural development program in Africa.

We are especially excited to send 3-4 AGRA Watch leaders to Africa in 2018! The Alliance for Food Sovereignty in Africa has invited us to attend their annual meeting as an associate member. This is a huge honor and presents an opportunity to deepen our partnerships, cultivate greater cross-pollination of ideas and exchange of publications, and build stronger food sovereignty movements internationally. We aim to raise enough funds to include site visits to several partners, an important opportunity to document farmer and activist stories, and strengthen joint campaigns.

CAGJ is unique: we show up for multiple food justice campaigns, while also building international solidarity and engaging in transnational organizing. And we do this work with only two staff, thanks to our activist members, volunteering your time and funds. We need your generous support again to continue building global and local networks of solidarity. Thank you for including CAGJ in your year-end giving!

To another year of building the world we know is possible!

p.s. To achieve our goals in 2018, we need sustained funding. We are seeking $3000 more per month from Monthly Sustainers by the end of the year, to add to the incredible commitment of $7000 per month from over 30 donors who became sustainers at SLEE. Please consider a generous monthly gift.