Photos and Video:
See more photos of the event on Facebook
Watch a video of the full event on YouTube 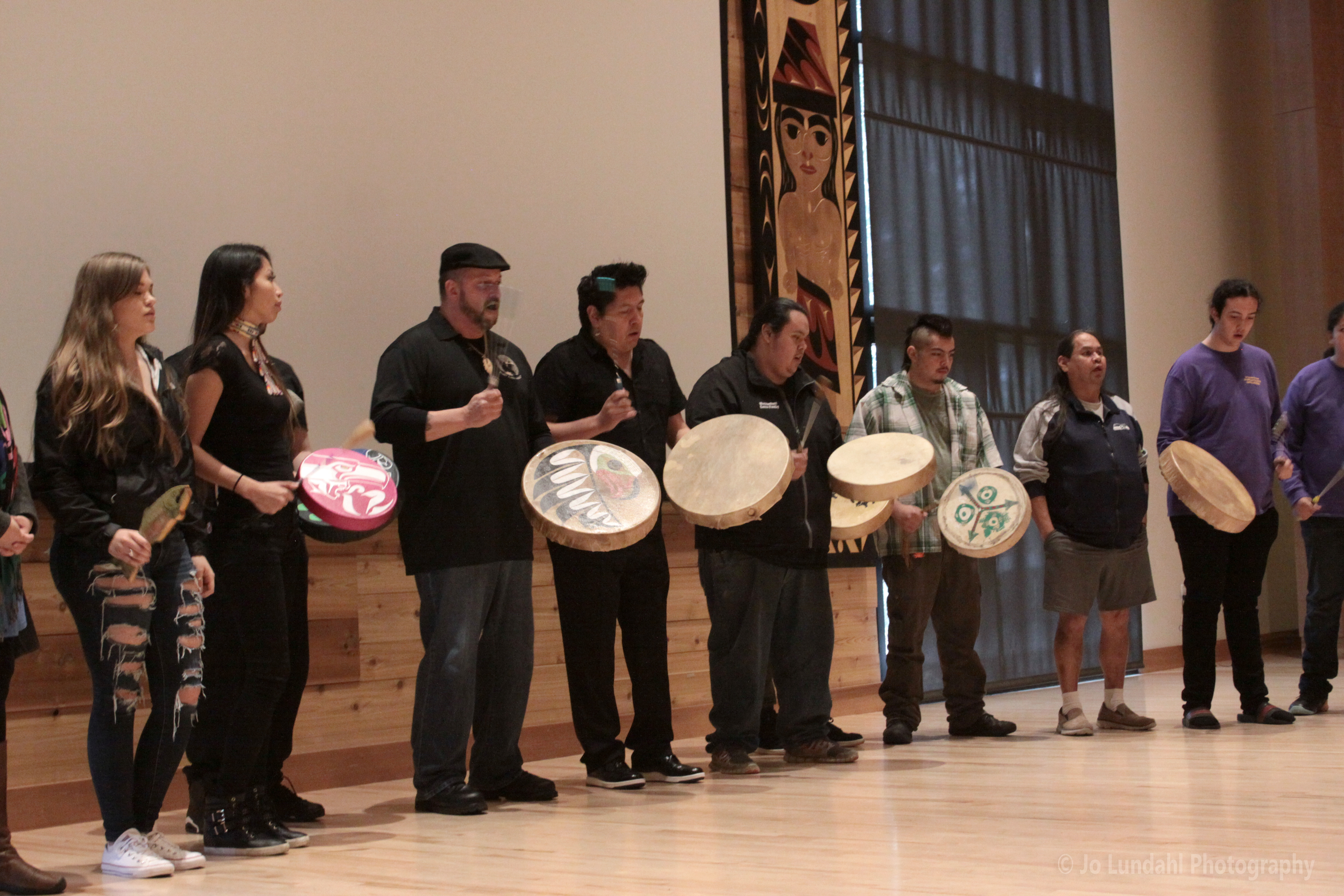 Members of the Canoe Family of the Muckleshoot Tribe welcome guests with a song.

On March 11, 2017 over 200 people came out to a community gathering at the Longhouse on UW’s campus to learn about the impacts of genetically engineered (GE) salmon on Northwest Coast Salish tribes, the environment, and human health.  Organized by Community Alliance for Global Justice and the Muckleshoot Food Sovereignty Project, the event was centered on the importance of wild salmon as a cultural and ecological keystone species in the region. A round-up of media coverage is included below.

Justice Bill, a young member of the Muckleshoot Tribe, welcomed everyone to the Longhouse, also known as the Intellectual House or wǝɫǝbʔaltxʷ (pronounced “wah-sheb-altuh”) in the Luhshootseed language, with a traditional honoring song performed by the Canoe Family. Storyteller Roger Fernandes of the Lower Elwha Klallam Tribe then told Coast Salish stories of the return of wild salmon after their long journey to the sea, and the relationships that the salmon people, as they are known, bring to life (hear the stories starting at 11:53 here). 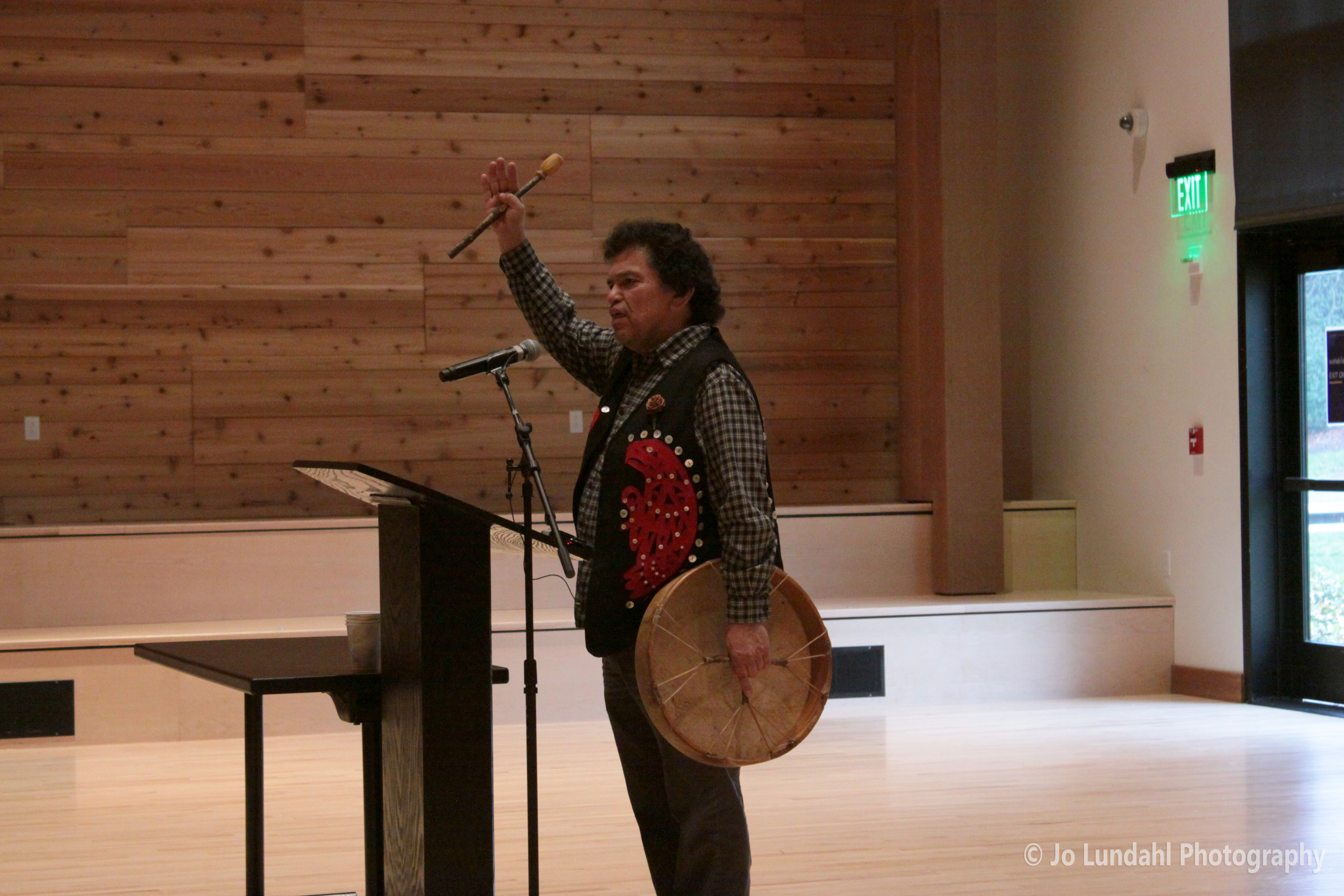 Event speakers then dove into the problems with the FDA’s 2015 approval of transnational biotech corporation AquaBounty Inc.’s AquaAdvantage salmon, the first genetically engineered animal to be approved for human consumption.

Valerie Segrest, Native nutrition educator and founder of the Muckleshoot Food Sovereignty Project, spoke about the tribal resistance to GE salmon from the beginning (listen or watch at 46:59 here). “As soon as this was brought to my tribal council, it was unanimously voted against. We passed a resolution in 2012 opposing the production of genetically-engineered salmon. That opened up the doorway to take it to the Affiliated Tribes of Northwest Indians where it was also unanimously passed. Within six months it was passed at the National Congress of American Indians. It is safe to say that all of Indian country…completely stood in solidarity against this fish.” 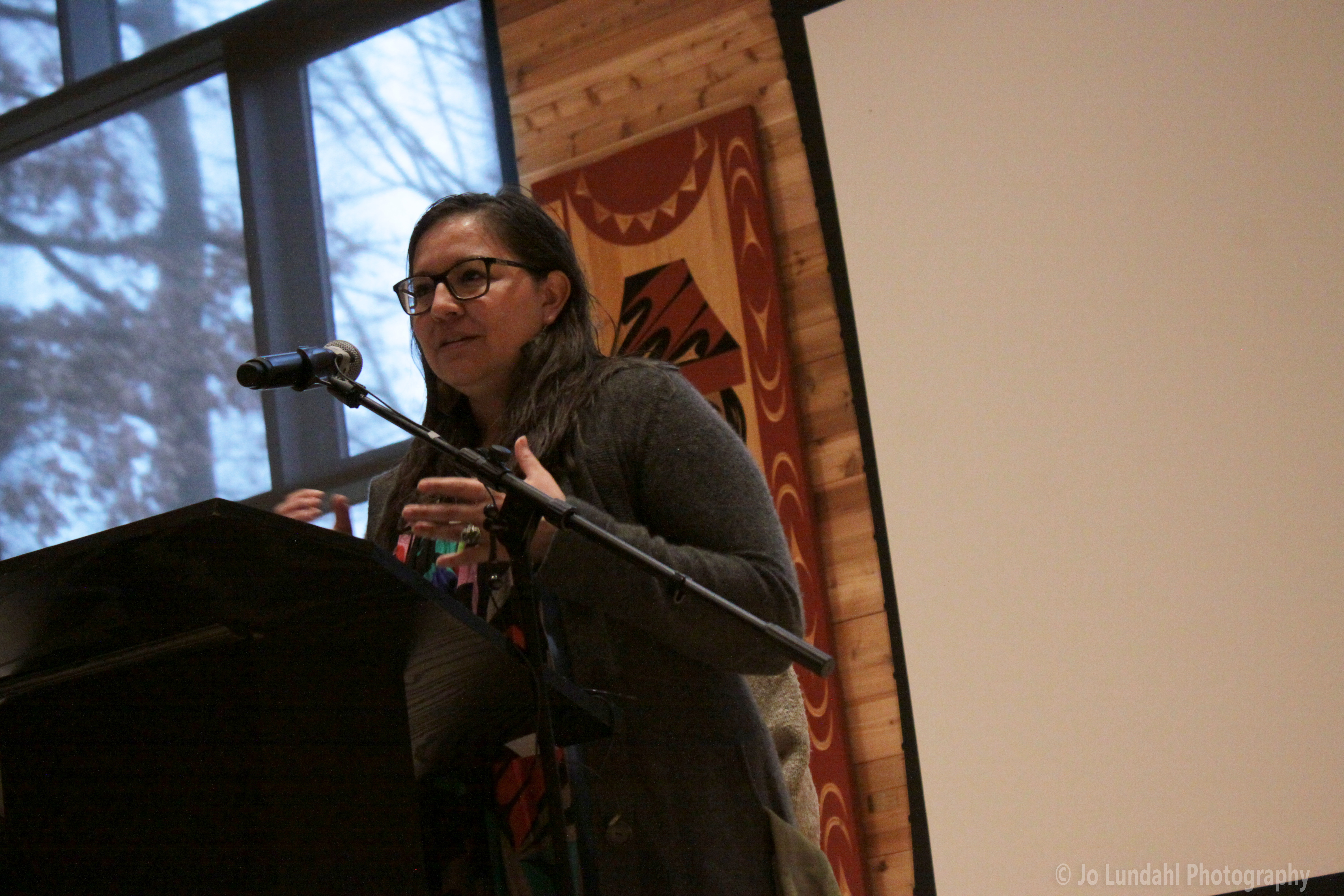 Local fisherman and co-founder of Loki Fish Company, Pete Knutson, spoke about the genetic engineering industry that AquaBounty promotes (listen or watch at 59:24 here). Despite the FDA’s claim that GE salmon is safe for human consumption (which has been disputed due to lack of sufficient evidence), Pete emphasized that we don’t know the side effects of essentially creating a fish that doesn’t go to sleep in order to grow so rapidly. Developing GE salmon in isolation does not mean they won’t make their way into the wild ecosystem, a major concern since AquaBounty’s salmon was approved without adequate environmental risk assessment to wild fish habitat.

Following the FDA’s approval of AquaBounty’s GE salmon, the Quinault Tribe and 11 other plaintiffs filed a lawsuit against the FDA in March 2016. Steve Mashuda, managing attorney of the Oceans program of Earthjustice, one of the lead plaintiff’s in the case, explained, “We have laws on the books in this country that tell agencies that they need to ‘look before they leap’ – that’s the national environmental policy act; it’s one of the laws at the heart of our lawsuit…You don’t just make assumptions about things, and that’s where FDA went off the rails.”  On the issue of labeling requirements, Steve noted, “There is no labeling for genetically-engineered salmon.” (Listen or watch at 1:15:52 here.) 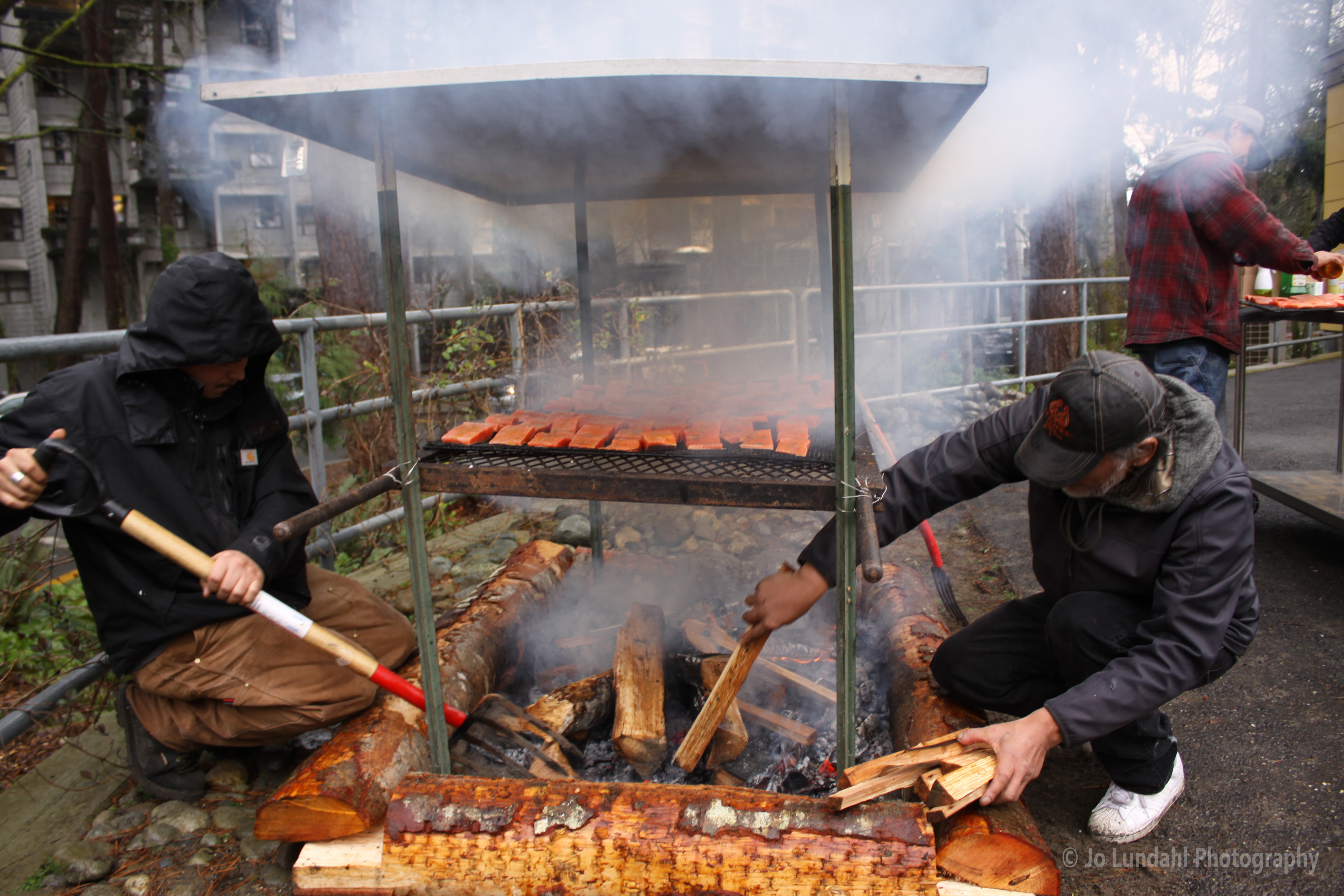 Members of the Muckleshoot Tribe cook salmon over a fire pit outside the longhouse.

Despite the rain, Muckleshoot Tribe members cooked wild salmon traditionally prepared over a fire pit outside, which was served with locally-harvested nettle soup and kale salad. Lunch was followed by another traditional song performed by the Canoe Family.

The event closed with Simone Adler, CAGJ Organizing Director, giving an overview of the strong positions Senators Murray and Cantwell have historically taken to oppose GE salmon, and a call to action for a state resolution in Washington that opposes the FDA’s approval of GE salmon and calls on Congress to require labeling. Alaska’s state legislature just passed such a resolution in February (listen or watch at 2:06:38 here). Simone also announced CAGJ’s and Muckleshoot Food Sovereignty Project’s plans to create a short educational film about the issues of GE salmon with film producer Katie Jennings of New Canoe Media. 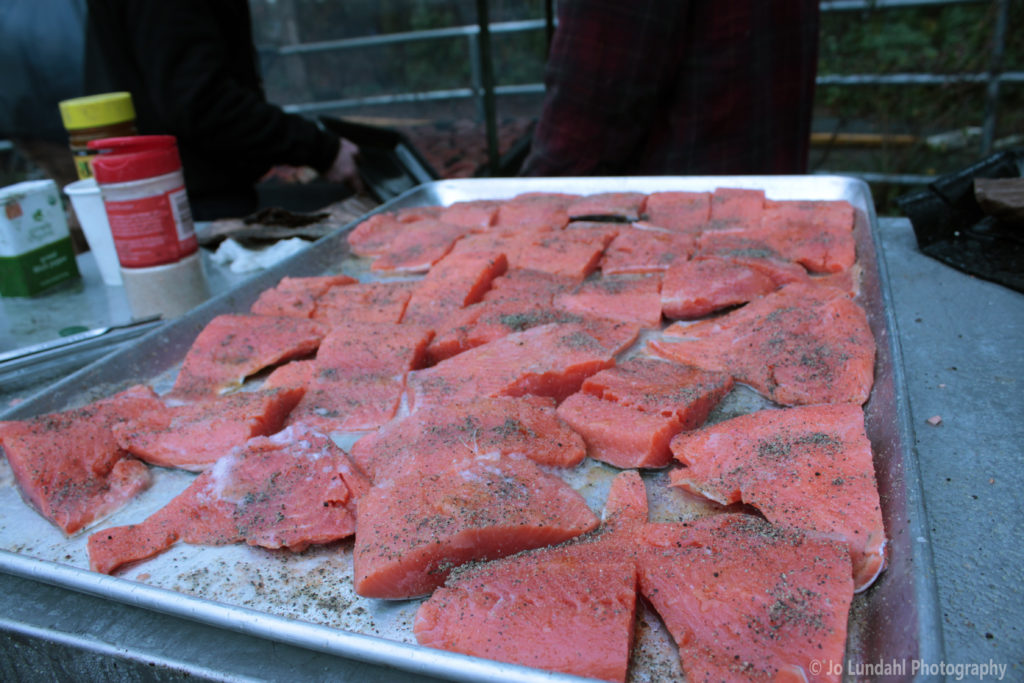 To get involved, come to CAGJ’s Food Justice Project meetings the third Tuesday each month. Contact us at fjp@cagj.org.

Thank you so much to everyone who worked hard to organize this important event, to the 28 Community Partners who helped us publicize, and for everyone who showed up to support – you all contributed to a successful and inspiring community gathering!