This blog is the first in a series by CAGJ to elucidate the issues we aim to address in our Food Justice Project Solidarity Campaign highlighting Northwest tribal opposition to GE salmon. 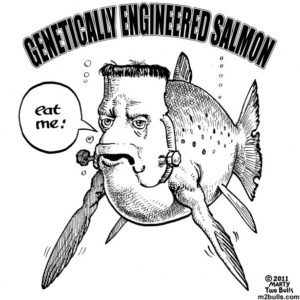 In November 2015, the FDA granted the approval of genetically engineered (GE) salmon developed by the Massachusetts-based biotech company Aquabounty. Known as “AquaAdvantage salmon”, the GE salmon is engineered with the growth hormone genes from a Chinook salmon and the DNA and anti-freeze genes of an eelpout. According to Aquabounty, these changes in the genetic makeup of the fish cause the production of growth hormones year round and create a fish that grows at twice the rate of a normal salmon.

The goal of the AquaAdvantage salmon is to boost productivity – and therefore profit for Aquabounty – but in doing so, numerous risks come into play. Though AquaBounty has attempted to assure the public that the risk of farmed salmon escaping into wild populations is low, each year over 2 million farmed salmon escape from open-water net pens into the north Atlantic, in turn straining ecosystems and outcompeting wild salmon populations, and in some cases causing the fish to resort to cannibalism. Research studies have concluded that if fertile male GE salmon were to escape from captivity, they would likely succeed in breeding and passing their mutated genes into the wild. In a recent study, the National Academy of Sciences concluded that if a release of 60 GE salmon into a wild population were to occur, a populace of 60,000 wild fish could become extinct in less than 40 salmon generations. If GE salmon are released, it is likely that they will join  the millions of salmon that escape yearly, putting entire ecosystems and populations at even higher risks than they are today.

AquaAdvantage salmon are the first genetically engineered animal meant for consumption to be approved by the Food and Drug Administration (FDA). Beyond the risk of decimating entire salmon populations and turning them into frankenfish, with genetically engineered foods also comes the high risk of health problems in humans, in part from heavy antibiotic use and hormones in the breeding. At this point in time, there is a lack of independent scientific research on these salmon as the FDA decided the fish are safe to eat based solely on data provided by AquaBounty.

While the FDA has determined that no additional labeling of AquAdvantage Salmon is required, but could be voluntary, WA State Senator Maria Cantwell issued a statement in December 2015 condemning the FDA’s approval of GE salmon, supporting the development of labeling guidelines, and requiring GE labeling for these fish. However, without stronger regulation and labeling requirements, companies that decide to sell AquaAdvantage salmon could choose not to label the GE fish on grocery store shelves, leaving consumers in the dark.

Following a GE-free seafood campaign organized by Friends of the Earth and a coalition of over 30 health, food safety and fishing groups, over 60 grocery store chains nationwide have committed to keeping genetically modified salmon off their shelves, including, Costco, Safeway, Kroger, and Trader Joe’s. CAGJ played a role in getting Costco to make this commitment, which it publically announced on the day that the FDA approved GE salmon.

In June 2015 CAGJ delivered 300,000 signatures to Costco’s headquarters in Issaquah, WA to urge the company to commit to not selling genetically modified (GM) salmon.

In 2014, The Muckleshoot Tribe and the Affiliated Tribes of Northwest Indians (ATNI) called on the FDA to deny all applications to distribute genetically engineered salmon in the U.S. without prior completion of an Environmental Impact Statement and scientific review that sufficiently consulted with Northwest Treaty Tribes. Virginia Cross, Muckleshoot Tribal Council Chair, stated that “genetically engineered salmon not only threaten our way of life, but could also adversely affect our treaty rights to take fish at our usual and accustomed places.”

The National Congress of American Indians joined the effort, and passed a resolution to “oppose the introduction of and sale of genetically engineered salmon in the United states if the FDA decides to allow it and requests tribal consultation on the matter before any action by the FDA.” In July 2016, The Quinault Indian Nation of the Northwest and 11 other plaintiffs joined in filing a lawsuit against the U.S. Food and Drug Administration for the approval of AquaBounty’s genetically engineered salmon.

Being that the native people of the Pacific Northwest region are often referred to as “The Salmon People”, it comes as little surprise that local tribes have been outspoken against questions of genetically modified fish. Valerie Segrest, educator and member of the Muckleshoot tribe stated that “The Coast Salish people have organized their lives around salmon for thousands of years, We see them as our greatest teachers, giving their lives for us to have life. Corporate ownership of such a cultural keystone is a direct attack on our identity and the legacy our ancestors have left us. Absent indisputable evidence that there is no harm in human consumption, wild fish habitat or the treaty-protected fishing rights of Northwest Indians the FDA must not permit the promised increase of production efficiency to trump sound science or fishing rights and culture of Northwest Indians.”

Salmon are vital to the social, economic and spiritual lives of native peoples across the Northwest, making it necessary  to study the economic, social and environmental impacts of genetically engineering what has for thousands of years been a cultural staple. It is essential to let corporations know that people, indigenous culture, native wildlife populations, and ecosystems must come before their profits.

To get involved and learn more, join us for a salmon cook-out to stop genetically engineered fish! Community Alliance for Global Justice is collaborating with the  Muckleshoot Food Sovereignty Project and the Northwest Atlantic Marine Alliance to host a community gathering to learn more about how GE salmon threatens a cultural and ecological keystone species in our region. We will especially highlight Northwest tribal relationships to salmon, and how biotech companies are threatening treaty rights. Here are the details of the event:

This event is FREE and open to the public. PLEASE RSVP: Email fjp@cagj.org

We look forward to sparking convivial conversation and community engagement around this important environmental, food justice, and Indigenous Rights issue.

Community Alliance for Global Justice wants to acknowledge the generous support of the Muckleshoot Tribe Charity Fund Grant Program for this work.