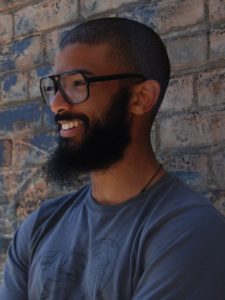 The “world hunger” discussion – certainly in the media – focuses on the overdeveloped nations and wealthy individuals figuring out how to help and provide resources for less industrialized nations to feed themselves. Whether it’s the G8, Monsanto, the Gates Foundation, or any other corporate entity, their answer to solving world hunger includes economic growth and some new agriculture technology. Both of those solutions are misinformed and unnecessary. The solution is actually quite simple; the people experiencing hunger probably know the answer better than most. World hunger will cease to be an issue when all people have the right to produce and share food as they see fit.

When examined from a political lens, world hunger is fundamentally a power issue. Governments have co-opted the power of their people in order to join the rat race of capitalism; corporations also deceive governments and people with false promises of a better quality of life once they’re given permission to establish themselves. The creation of world hunger probably began with the onslaught of colonialism and continues with the perpetuation of neoliberalism through trade agreements and more militarized foreign affairs. In both cases, stable populations of people are coerced into divesting of power, which leads to increased dependence on global forces.

Local people power can neither be measured by weapons technology nor GDP.  Rather, the power of a community can be qualified by the health of individuals and their bonds with one another. When a group of people is healthy and has strong relationships built on trust, it possesses resilience. Food production gives people the power to sustain themselves. Moreover, a society that supports agriculture that is healing to the Earth and its people is arguably the fundamental building block of civilization. Regarding world hunger, it is clear that widespread starvation is the result of taking a population and individuals’ ability to feed themselves.

With this understanding, it is encouraging to know the solution to hunger is clear; give the power back. Stated differently, countries and corporations must acknowledge and allow populations of people to have food sovereignty. Via Campesina, the world’s strongest grassroots organization fighting for food sovereignty defines it as “the right of peoples to healthy and culturally appropriate food produced through ecologically sound and sustainable methods, and their right to define their own food and agriculture systems.” As simple as it sounds, there is strong opposition to the food sovereignty movement. Such a model does not play into and benefit the profit driven model so many countries and companies adhere to.

Nonetheless, the movement has been named and defined and people all over the world are pursuing it. More importantly, groups of people are organizing collectively, and one organization doing that in the United States is the U.S. Food Sovereignty Alliance (USFSA). The USFSA is dedicated to ending poverty and bringing forth more democratic control over the food system locally, nationally, and globally. The alliance also hosts the Food Sovereignty Prize, an annual event that honors organizations leading the food sovereignty movement. 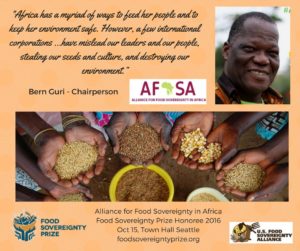 This years honorees are the Farmworker Association of Florida (FWAF) and the Alliance for Food Sovereignty in Africa (AFSA). Both organizations are challenging systems of oppression through organizing people experiencing injustice in the food system. They also practice principles of agroecology, which seek to incorporate culture, activism, and ecologically sound practices into food production. Thanks to the efforts of AFSA and FWAF world hunger is not simply being addressed by feeding people or making them conform to foreign food production techniques. These grassroots organizations are building resilient communities and recognizing the power and dignity of the people they serve.

Come to hear representatives of both AFSA and FWAF at Town Hall Seattle on October 15 (located at Eighth & Seneca).  The event is free.  Doors open at 5:30, Ceremony begins at 6:00, Reception begins at 7:30. Pre-Registration appreciated.