Anchor Farm Project is a commercial agriculture program designed initially for the farmers in Malawi.[1] It has been developed and operated by the Clinton Foundation’s “Clinton Development Initiative” and funded directly and indirectly by the Bill and Melinda Gates Foundation (BMGF) and its subsidiary Alliance for Green Revolution for Africa (AGRA). The project follows a blueprint of commercialization of agricultural and the use of “certified seed… fertilizer and agro-chemicals, and practicing other advanced agronomic techniques,”[2] the same blueprint commonly seen in other Gates-supported projects that often leads farmers to subsequent debts. Most of the information on Anchor Farms available at the time of this writing is produced by the Clinton Foundation or AGRA, rather than by independent third party or Malawian sources.

The Clinton Development Initiative (CDI) proclaims to work directly with smallholder farmers to increase their income and food security. Anchor Farms were first established in 2008 in Malawi. The Project works by establishing a large commercial farm in a rural area, then reaching out to local farmers, gathering them into “farming clubs” of 10-20 people. Within each club, members select a leader who is trained at the commercial anchor farm and then disseminates the knowledge to the rest of the farming club. 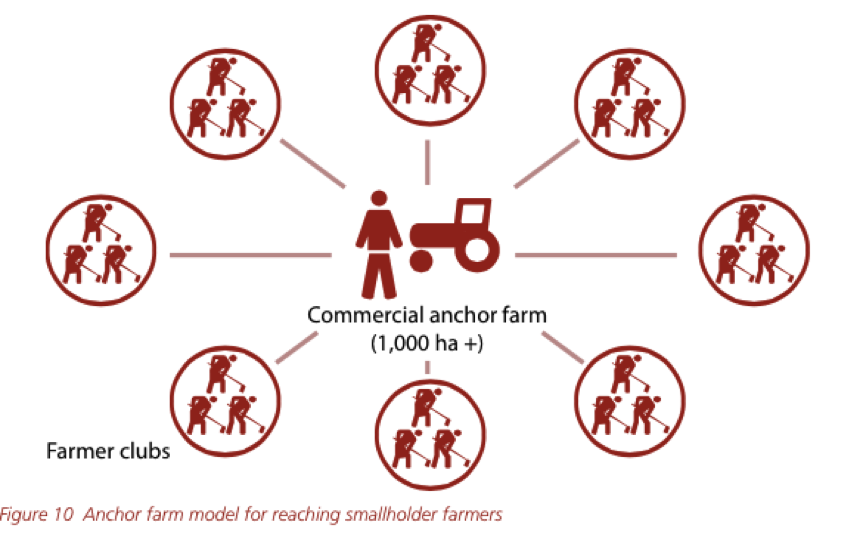 The Clinton Development Initiative also works as a middleman between local banks and the farmers in order for farmers to secure loans for the agricultural input. To qualify for the loan, farmers must summit a 15% deposit, then receive the loan in forms of tools, seeds, and fertilizer from the dealers, rather than cash from the bank. CDI promises to facilitate the crop sale through its relationships with large, international buyers, including, Maldeco Fisheries, Farmers World, Transglobe, and Senwes-Bunge (a subsidiary of Bunge Limited, one of the largest food processing and grain shipping companies in the world). Once the crops are sold, the local bank agents collect the repayments.[3] In other words, the Project is designed to bring many smallholders who have been producing crops for local use and consumption into the global capitalist market, producing crops for export.

On the Clinton Foundation site, the Project is listed as a success claiming to have helped “more than 105,000 farmers in the Mchinji, Dowa, Ntchisi, and Kasungu districts [of Malawi] during the 2016-2017 season,” who “have experienced an average yield increase of 150 percent.”[4] There is, however, no mention of change in net farm income.

The Bill and Melinda Gates Foundation is one of the largest contributors to the Clinton Foundation as listed on their website of donors, contributing over $25 million—the highest tier of donors.[5] In addition, AGRA, a subsidiary of BMGF, specifically funds CDI’s Anchor Farms through AGRA’s soil health program grant.[6]

The International Initiative for Impact Evaluation (3IE), funded by the Gates Foundation, conducts an evaluation study on the Anchor Farms project.[7] According to the 3IE website, this study, TW4.1018, is ongoing and the full report is not yet available. It is designed to assess the effectiveness of three different intervention methods implemented under the Anchor Farm model. The effectiveness is measured by plot fertility, yield, and farmer-level outcome.

Critical analysis of Anchor Farms is hard to find. Many websites and articles reference the project, but almost all of them have nearly the same information, stating that the Clinton Development Initiative through Anchor Farms has produced about a 30% higher yield in maize and soybean. However, any holistic evaluation of Anchor Farms should look beyond yield and farmer income alone. Other variables might include, integration or linkages with the local economy including local suppliers, sellers of end products, labor employed, etc. in an effort to assess impacts on the larger economy or the development model. Also, environmental factors such as soil health, use of chemical fertilizers and pesticides, and exposure of toxic products on farm workers and animals must be studied. As noted in some research in the US[8], organic farms may have lower yields than chemical farms but exhibit greater resiliency to drought, have less financial risk, and achieve greater net incomes because of higher prices of organic foods.

[1] This report was originally written in September, 2015. By September, 2016, Clinton Foundation has implemented additional Anchor Farm projects in Rwanda and Tanzania. See https://www.clintonfoundation.org/our-work/clinton-development-initiative