Our campaign is highlighted by our friends at Food First on Huffington Post in this great article co-written by our ISU student allies, Ahna Kruzic, Angie Carter and Rivka Fidel. Please comment at Huff Post and please share widely! 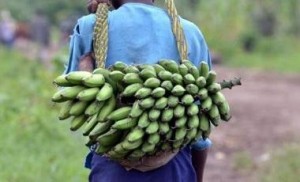 Another skirmish in the global battle over GMOs has broken out — this time at Iowa State University. Recently, a coalition of students delivered a petition with 57,309 signatures to ISU’s College of Agriculture and Life Sciences protesting an upcoming human feeding trial of genetically engineered (GE) bananas. The petition, addressed to the college and The Bill and Melinda Gates Foundation, was simultaneously delivered to by AGRA Watch to the Gates Foundation headquarters in Seattle. If the experiment takes place, twelve female ISU students will be paid $900 each to eat the bananas in what is billed as one of the first human feeding trials of GE products.

For some, the ISU GE banana study might be seen as a welcome change of direction. After all, the GE industry that has yet to carry out any epidemiological or regional ecological studies to assess GE’s adverse impact on public health or the environment. (Essentially, we’ve all been part of one big, uncontrolled industrial experiment.)

But this study doesn’t really address public health or environmental risks, it’s about testing to see if the GE banana, high in beta-carotene, actually delivers more Vitamin A to the consumer. Like Golden Rice and other bio-fortified products, the claim is that the GE banana has the potential to save lives — ostensibly in Vitamin A-deficient Uganda in East Africa.

There are many assumptions behind these claims, none the least of which is that Ugandans actually eat the export banana stock being engineered (not so much); and that there aren’t high beta-carotene varieties already being consumed in East Africa (there are). One might also start by asking why some East African diets are low in Vitamin A and if bio-fortified bananas are really the right solution to the problem…

Initially, when students raised critical questions about the study, they were summarily dismissed with the usual pro-GE criticism for being “anti-science” and “privileged” and for denying life-saving technology to the poor (These arguments are now being steadily manufactured at Cornell University thanks to a public relations grant from the Bill and Melinda Gates Foundation.)

The opportunity to engage in a scientific dialogue is indeed a privilege — one usually reserve for those with power — and rarely extended to university students, the general public or the populations who are the objects of scientific research. With this privilege comes the responsibility to ask difficult questions about the ethical dimensions of GE banana research, as well as its potential impacts and the possibility of other viable alternatives. If it takes a student petition with 57,309 to open up public debate on the issue, the students should be thanked, not ridiculed.

Last year, concerned ISU graduate students sent ISU a series of rather tame questions regarding how the study would be conducted and potential effects the GE bananas could have on Ugandan food systems. Their questions were not even about whether the use of biotechnology was morally right or wrong, but about social, economic and environmental impacts that this kind of research could have upon real people in real places.

The somewhat lengthy questions boiled down to four main queries: (1) How will GE bananas impact nutrition and hunger in Uganda, or how will ISU and/or the Bill and Melinda Gates foundation address this question? (2) How was the technology determined to be a culturally appropriate intervention? (3) Who will own or control this technology upon its development? and (4) How should public universities be involved in GE bio-fortification and testing?

The students’ questions recognize that hunger and malnutrition are not just biological or technical challenges, they are social problems rooted in poverty, inequality and a skewed distribution of resources. Ending hunger can’t be reduced to simple gene transfers, and the socioeconomic and agroecological impacts of GE go far beyond the single crops in which they are genetically expressed.

For an approach to hunger and malnutrition to be scientific, it must incorporate — and take part in a dialogue about — the social, economic, political and environmental consequences associated with the proposed technology — GE or non-GE. No scientific study is free from the social, political, and cultural context in which it is conducted. We all benefit from meaningful critiques, pulling from multiple scientific disciplines that challenge the technology and its potential uses, as well as interrogate who controls, owns, and profits from it.

Science is a negotiation – an iterative process rooted in asking questions, in testing hypotheses and counter-hypotheses. Thus it is crucial that scientists and students of science, regardless of status, expertise or background, be able to ask critical questions regarding each other’s work without fear of vitriolic retribution or retaliation. The GE proponents’ over-simplified approach — and their attacks against anyone who questions them are not only unscientific — pose risks to us all.

We need a long view that takes into account social inequality and includes space for critical dialogue. A single crop approach will not solve the fundamental problems of hunger and malnutrition. There is a great deal of evidence that farming systems based on the science of agroecology, and ones that place the empowerment of women farmers at its core will be more successful for ending poverty, malnutrition and hunger. There are systems gains for biodiversity, and climate mitigation and adaptation, as well. Many agricultural and food systems scientists acknowledge that we need more research and development in these approaches.

While administrators at public universities, philanthropic organizations, and private corporations talk about “saving lives,” many others want to rebuild their lives on their own terms, through agroecological methods and food sovereignty. As the IAASTD—the 4-year study by over 400 scientists concluded in 2009—suggests, rather than putting so many eggs into the GE basket, we should be investing in agroecology and local food systems development.