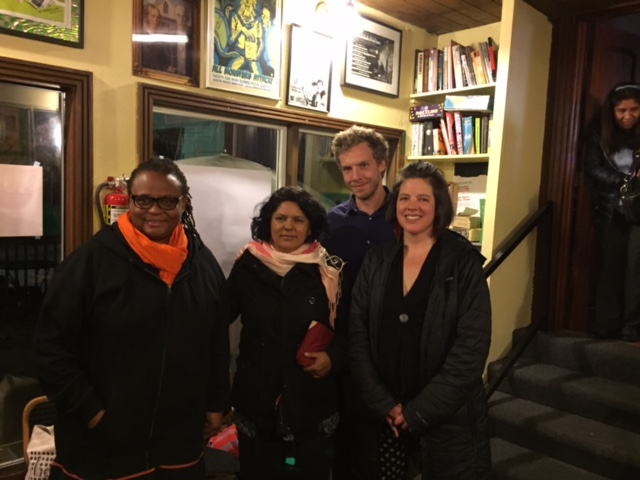 It is with a heavy heart that we share the devastating news of the assassination last night of Berta Cáceres, Honduran indigenous leader and winner of the 2015 Goldman Prize and Romero Prize. CAGJ hosted part of her visit to Seattle in November, with Miriam Miranda, whose organization, Honduran Black Fraternal Organization (OFRANEH), won the 2015 Food Sovereignty Prize.

Below is the announcement from Berta’s organization, COPINH, and a song/poem written today by Honduran musician Pavelón Cruz, translated and shared by Jesse Freeston, whose film, “Resistencia: The Fight for the Aguan Valley” we screened together with Miriam and Berta in November.

This evening at approximately midnight, the General Coordinator of COPINH, Berta Caceres was assassinated in her hometown of La Esperanza, Intibuca. At least two individuals broke down the door of the house where Berta was staying for the evening in the Residencial La Líbano, shot and killed her. COPINH is urgently responding to this tragic situation.

Berta Caceres is one of the leading indigenous activists in Honduras. She spent her life fighting in defense of indigenous rights, particularly to land and natural resources. In 2015, Berta won the Goldman Prize for her outstanding activism and leadership. Her death will have a profound impact on the many Lenca communities that she worked with, COPINH, the Honduran social movement, and all that knew her.

Berta Caceres and COPINH have been accompanying various land struggles throughout western Honduras. In the last few weeks, violence and repression towards Berta, COPINH, and the communities they support, had escalated. In Rio Blanco on February 20th, Berta, COPINH, and the community of Rio Blanco faced threats and repression as they carried out a peaceful action to protect the River Gualcarque against the construction of a hydroelectric dam by the internationally-financed Honduran company DESA. As a result of COPINH’s work supporting the Rio Blanco struggle, Berta had received countless threats against her life and was granted precautionary measures by the InterAmerican Commission for Human Rights. On February 25th, another Lenca community supported by COPINH in Guise, Intibuca was violently evicted and destroyed.

It is urgent to demand a thorough and immediate investigation of the circumstances surrounding Berta’s death.
COPINH will send out more information as it becomes available.

Pavelón Cruz:
“Berta.
They take away life and they leave us fear.
Terror.
Horror.
And it hurts, knowing for certain that we will never know who sent them, nor who pulled the trigger
(even though we know)
Those who steal hope with lead,
who don’t tolerate love.
Today, your blood became the water of the Gualcarque River, it became mountain and wind,
land and ancestral trees,
as old as the suffering of a people on its long march.
Assertion of a life born of the land, the water and the corn.
Life should be at least half as dignified, brave, combative and true as your life was, our beloved and unmissable big sister.
Indigenous Lenca warrior,
beautiful and eternal.”