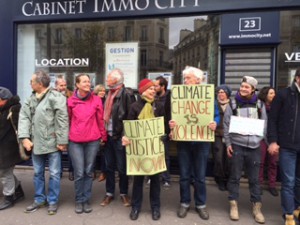 World leaders are gathering in a large city in the global north this week and next to ostensibly solve global problems that affect all of us. At the table are many rich, privileged, and mostly white men from powerful positions in government and industry. The kick-off was on November 30.

This could describe either the shutdown of the 1999 WTO ministerial in Seattle, or the COP21 climate conference taking place now in Paris. Not every movement harkens back to that week in 1999 when people power defeated corporate power, but there are enough common threads in the causes, solutions, and mobilizations against the WTO and the COP21  for a fair comparison.

The stakes are just as high today as they were for the Seattle ministerial.  The WTO protests were against the pro-corporate, free trade agenda pushed by the WTO and other international financial institutions. The COP21 has a different focus, but the popular mobilization, demands, stakes, and players in the negotiations all echo those aspects of the WTO ministerial.  We are still fighting corporations’ power and influence in global institutions. And, given the stakes, the need for real solutions for climate justice, and the need to counteract fossil fuel and other polluting interests, grassroots people’s movements who will push for real solutions outside the official talks are just as important as they were in 1999.

The fingerprints of corporate interests are all over many of the world’s politicians, who are unwilling to commit to just climate policies, instead promoting  carbon markets that would permit the fossil fuel industry to continue warming the planet, and create further profit-making opportunities for the 1%. World leaders’ lack of political will to commit to truly progressive and lifesaving carbon reduction and temperature goals is causing a climate catastrophe. False solutions like carbon markets put off the true solutions we should have already enacted. In their November 30 press release, the It Takes Roots Delegation call carbon markets and offsets “the trojan horse that the fossil fuel industry is pushing through the Paris Climate Agreement”.

This week Bill Gates attempted to steal the spotlight, announcing new commitments by governments and philanthropists, including the Gates Foundation, to spend millions on “clean tech” innovations. Meanwhile Seattle’s Gates Divest and the Guardian’s Keep it in the Ground campaigns have yet to get a response to their demands that the Gates Foundation divest from fossil fuel companies.  And AGRA Watch points to the limitations to the divestment movement, when the Gates Foundation is busy funding agribusiness  through their grant-making (new Op-ed forthcoming!). CAGJ agrees with this statement made in a Guardian article critiquing Bill Gates as savior:  “Gates’ allegiances are clear. By his own admission, he wants governments to lay the groundwork for a new frontier of green profit-making, then get out of the way.”

The momentum towards corporate globalization was slowed in 1999 as a result of global south rejection of the global north’s neocolonial abuse of  their countries, and specifically because of global south farmers’ resistance to unfair WTO agriculture policies during the ministerial.  Small-scale farmers’ interests are again well-represented at the Cop21. Many of our allies, from both the US and Africa, are in Paris advocating for small-scale farmers and insisting that the impacts of agribusiness on climate change be taken into account, as well as the mitigating effects of agroecology. Proponents of so-called “climate-smart” agriculture will also advocate for their false solutions. (See attached toolkits for examples of key messages being promoted at the talks.)

While protests have been banned in Paris in the wake of the recent terrorist attacks, thousands are taking to the streets in defiance of what Naomi Klein has called a “shock doctrine” response by the French authorities. We know from experience that the role of grassroots movements is critical, both in changing the momentum of global negotiations, and ultimately in leading the solutions to the crises facing our planet and its many peoples.

The climate justice movement evolved out of many movements preceding it, including the global justice movement that shut down the WTO.  CAGJ was born of that great week of protest, and we proudly carry on the legacy of creative and strategic grassroots action for justice. Through our commitments to promote food sovereignty and agroecology, we join the climate justice movements, and honor the local leadership of the grassroots people of color-led organizations whose historic Summit we recently participated in (read more about the Communities of Color for Climate Justice at FrontandCentered facebook page).

We must work to ensure that commitments, decisions, and solutions coming out of the COP21 encompass justice and a sustainable future for all people.