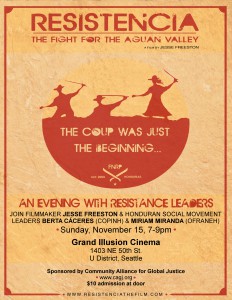 Seattle is fortunate to welcome two of the most important leaders of Honduran social movements today: Berta Cáceres and Miriam Miranda. They are traveling to the US to receive the Oscar Romero Award. Miriam Miranda is a leader of the Honduran Black Fraternal Organization (OFRANEH), which works with the 46 communities of the Afro-indigenous Garífuna of Honduras, to defend their territories, natural resources, identity, and rights. OFRANEH is the winner of the 2015 Food Sovereignty Prize. Berta Cáceres is the founder of the Civic Council of Popular and Indigenous Organizations (COPINH), which works to defend indigenous Lena communities threatened by mining and hydroelectric projects. Bertha Cáceres is a 2015 Goldman Prize winner.

The film: “Resistencia: The Fight for the Aguan Valley”
June 28th, 2009. The Honduran people are preparing to vote in the first referendum in the country’s history. The proposition is to write a new constitution, and a ‘yes’ vote could dramatically transform the country, perhaps even guaranteeing land for the country’s 300,000 landless farmers. But, instead of waking up to ballot boxes, they see soldiers carrying out the first coup d’état in Central America in three decades. This is the story of the two thousand farming families who challenged the coup project by taking over the plantations of the most powerful man in the country. The camera follows three members of the movement, and one clever journalist who travels in from the capital city, as they convert the plantations into cooperatives and install locally the democracy they dreamed of seeing nationally. Shot over four years, the film is both a testament to the capacity of an organized movement to transform the most fertile land in the country, as well as an account of the coup regime’s violent attempt to get the land back.

The filmmaker: Jesse Freeston is an independiente documentary filmmaker and video-journalist based in Montréal, Québec. Jesse has worked with The Real News Network, teleSUR, Al Jazeera, CUTV, and Vice. He has completed two independent documentaries, the first entitled Revolutionary Medicine: A Story of the First Garifuna Hospital (co-directed by Beth Geglia) and in 2015 he released his first feature-length documentary, Resistencia: The Fight for the Aguan Valley.