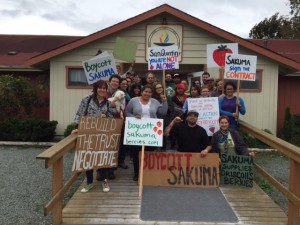 For a list of excellent resources to learn more about farmworker justice, Familias Unidas and how to stay connected with the boycott movement, click here.

Further details about how to take action can be found on the Familias Unidas website.

To see photos from the Sept 19, 2015 Teach-Out, check out this album on Facebook.

On a Saturday morning in the middle of September (9.19.15), near the end of the berry-picking season in Skagit Valley, about 30 people gathered at Skagit Unitarian Universalist church in Mt. Vernon. We came to  learn about the historic struggle that the independent farmworker union Familias Unidas por la Justicia has waged to demand a union contract that guarantees fair treatment and living wages for workers at Sakuma Bros Farms. Some of us drove up from the Seattle area, others came down from the Bellingham area, and there were two participants who learned about the event through Facebook and drove up from Humboldt State University in California! It was an altogether inspiring and informative event, with presentations, firsthand stories and reflections from farmworkers, a tour of the fields, processing plant and housing camps where farmworkers live and work, and an opportunity to tie everything together through reflection, collective action and discussion about how to support the ongoing struggle.

The day began with an excellent overview of the context and history of labor abuses at Sakuma farms, the formation of Familias Unidas in July of 2013 and the many victories the union has won, presented by Edgar Franks, from Community to Community (C2C), and Andrew Eckels, a key member of the Boycott Coordination Team. We then heard from three farmworkers who have been involved in the struggle: Ramon Torres, President of Familias Unidas, Lelo Jaurez, a 14-year old who has been working in agriculture since he was 7 years old, and Lelo’s dad Antonio Jaurez. We learned that Sakuma Bros. Farms is the largest industrial berry farm in Washington and thus holds a lot of influence in the region. A large majority of the 300+ migrant workers who harvest Sakuma crops each year are from indigenous groups in Oaxaca, Mexico and only about 15% speak Spanish. Andrew and Edgar spoke about a hierarchy of racism and discrimination that occurs in the fields, as those who do speak Spanish often hold more powerful positions at the farm and use the language barriers and cultural differences as a means to isolate and discriminate against workers who don’t speak Spanish. However, Familias Unidas has challenged this by creating a spirit of inclusivity in their organizing and giving all farmworkers, regardless of background or language, an opportunity for their voices to be heard.

While many of us were aware that many labor rights and protections afforded other labor groups in the U.S. do not apply to agricultural workers, it was surprising and disheartening to learn about the impact this reality has on farmworker children. In Washington state children as young as 12 years old are allowed to work in the fields with their parents, making 85% of the rate adults make. Lelo talked about one particularly ugly incident in the history of injustices Sakuma Farms is responsible for in which wages were being stolen from children’s paychecks. Once this became evident, farmworkers fought back and successfully reclaimed the stolen wages. However, the broader issue still remains, as Ramon Torres so clearly explained at the Teach-Out: “They say [letting children work in the fields] is an opportunity for entire families to earn more money. But if they paid us $15/hour our children wouldn’t have to work. They could spend more time studying and on their breaks from school they could actually have fun instead of working for 8-10 hours a day and returning back to school exhausted. But really they’re forcing us into these conditions. They know if our children can study they will maybe choose to leave the fields and eventually there will be no one to work their low-wage jobs. They’re trying to keep us here like slaves.” This reminds me of a quote from a farmer that was referenced in the documentary Food Chains: “We used to own our slaves. Now we just rent them.” Our industrial food system continues to rely on the exploitation of labor (particularly migrant labor) so that the large corporations that essentially control the food system can make bigger and bigger profits. These injustices in our food system is what Familias Unidas por la Justicia and supporters are bringing light to, and fighting against on both a local level and broader level, which is incredibly inspiring.

As we learned about the history and current landscape of the struggle, it was really striking to notice a common thread woven throughout: one of persistence and determination to continue the fight until demands for justice are finally met. Sakuma Bros. Farms has repeatedly used their power and control to repress and disempower their workers for over a decade, including wage theft, hiring private security guards to monitor union organizers day and night, firing workers who demand better wages and conditions and going back on agreements to create more fair production standards. However, Familias Unidas por la Justicia has responded by standing up to Sakuma every single time, demanding recompense and fair treatment; and labor disputes have resulted in gains for farmworkers, both locally and statewide. When Familias Unidas sued Sakuma over wage theft in 2014, Sakuma agreed to an $850,000 settlement, which is the largest farmworker settlement in state history. The same lawsuit led a ruling this past summer in which the Supreme Court of Washington determined that piece-rate workers must be compensated for their rest breaks and at the same rate earned while working. This historic ruling will have impacts for agricultural workers across the state who earn wages through a piece-rate system that incentivizes workers to skip their entitled breaks and work quickly in difficult and hazardous conditions so they can earn enough to make a living.

Despite the many gains Familias Unidas has made against many odds, the fight continues because they recognize that while improvements have been made in working conditions and wages, it is not enough until a formal agreement has been negotiated and signed. Ramon Torres explained that this struggle is not just for current workers at Sakuma farms but also to guarantee that these gains are not lost for future farmworkers. It’s also about demanding justice for farmworkers everywhere. The farmworker movement is continuing to strengthen and solidarity campaigns are expanding both nationally and internationally; pickets to raise awareness about the Driscoll’s boycott have been organized as far away as Detroit and Alabama and farmworkers organizing for better wages and treatment in San Quintin, Mexico are uniting with farmworkers in Skagit Valley in the same fight. A recent article by David Bacon published in The Nation provides an in-depth overview of labor movements connected along the Pacific Coast.

These are a few of the major takeaways we discussed as a group when we came back together after a delicious lunch of tamales made by Tara Villalba, a former staff member at Community to Community, and the farm tour led by Ramon Torres. The reflection time led by Ross Kirshenbaum, CAGJ Food Justice Project Co-Chair, was a great opportunity to digest both the difficult and inspiring things we learned and to reflect more broadly on the many injustices in our food system and how we can support the movement for justice. With that we moved into action; everyone made phone calls to PCC, demanding they respect the Driscoll’s boycott and remove Driscoll’s from their shelves, and to Driscoll’s, demanding they stop buying berries from Sakuma farms until the labor disputes have been resolved. We concluded with a presentation and discussion led by Andrew about how to get engaged and keep the movement going. Moving into the off-season, Familias Unidas is asking supporters to continue solidarity pickets at local grocers, create and circulate petitions, help with fundraising, arrange speaking engagements and write letters to the editor.

We left Mt. Vernon feeling inspired, energized and ready to continue supporting Familias Unidas in their historic struggle! Thanks to everyone who participated and contributed to this great event!