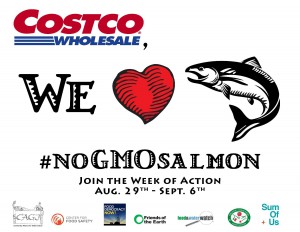 On Aug 29th – Sept 6th, join thousands of people across the U.S. to deliver letters to Costco stores!

Find out how to deliver a letter to your Costco below and make sure it doesn’t become the GMO salmon store!
We need to keep the pressure on Costco to get them to commit to not selling GMO Salmon!

Can you deliver a letter to Costco this week?  Please e-mail fjp@cagj.org and let us know!

HOW YOU CAN SUPPORT:
1. Print and Sign this letter and deliver it to Costco any time between now and Sunday night! See more info below!
2. Call Costco’s headquarters at 1-800-774-2678 and demand they say no to GMO salmon before the FDA says yes.
3. Sign this petition demanding Costco take the pledge for GE Free Seafood.
4. Post on Costco’s Facebook wall (www.facebook.com/Costco) and on your wall to spread the word. Use the message: “Costco: commit to keep GMO salmon off your shelves, even if approved by FDA!”
5. Tweet this message: #Costco needs to listen to the science and its customers! Tell @Costco to say #nogmosalmon!
After you take action, let us know! E-mail fjp@cagj.org and let us know how you helped! Between February and June we increased petition signatures six fold, from 50,000 to 300,000. Let’s repeat this feat and return with 1.5 million signatures! Our voices together cannot be silenced; with your assistance we will keep modified fish out of the market!
DELIVER A LETTER

Over 9,000 grocery stores, including Safeway, Kroger and Trader Joes, have codified their commitment not to sell modified fish by signing Friends of the Earth’s Pledge for GE Free Seafood. As the nations second largest retailer Costco is one of the most notable holdouts. Throughout the year CAGJ and other organizations have been increasing the pressure on Costco to stand with consumer health and safety. In March CAGJ delivered over 50,000 petition signatures to Costco’s Seattle location demanding they take the Pledge for GE Free Seafood. Unfortunately, store management refused to meet with us and accept our signatures. In response CAGJ returned with 300,000 signatures in June, delivering them directly to Costco’s headquarters in Issaquah. During the June delivery CAGJ’s coalition met with Costco management, who claimed that although Costco is committed to doing the right thing they are simply unable to commit to not selling modified seafood at this time.

Doing the right thing does not entail stocking the AquaAdvantage GMO salmon, which have a higher susceptibility to a disease-causing bacteria than their natural counterparts, posing health risks for consumers. Click here to learn more about the health and environmental risks posed by GMO salmon.