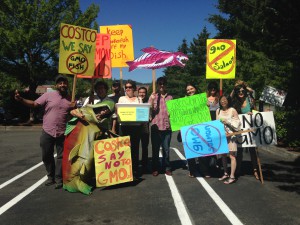 On Thursday June 25th CAGJ delivered 300,000 signatures to Costco’s headquarters in Issaquah, WA to urge the company to commit to not selling genetically modified (GM) salmon. In March we attempted to deliver 50,000 signatures to Costco in South Seattle, but they would not accept our petitions. This time we came back with 250,000 more signatures and went straight to the headquarters. About a dozen people gathered with colorful signs and chants, and an intern dressed as a salmon! (See link to pictures from the action here!)

In the news!
Dylan Knutson, general manager of Loki Fish Company, spoke to the media about the issues surrounding genetically modified salmon, and the importance of healthy and sustainable fishing practices. Danielle Friedman from CAGJ and Kristen Beifus from UFCW Local 21 were also interviewed during the action by local news stations, and the story has been making waves over the past week! Local TV station KIRO 7 aired a great piece on the evening news giving background on the GMO salmon issue and highlighting the CAGJ action. Other media outlets also picked up the story including KING5, Nation of Change, EcoWatch, Oximity, and Under Current News.

Let’s keep the pressure on!
Our petitions were received, but in conversation during the delivery the COO of merchandising, Doug Schutt, told us they wouldn’t commit to “never” selling the GMO salmon at Costco. While GMO salmon is pending FDA approval, over 9,000 other grocery stores across the country have signed a pledge to not sell the salmon in their stores regardless of the FDA ruling, yet Costco still refuses to make a commitment. We will continue to put pressure on Costco until they commit to doing the right thing: listening to their consumers and to the thousands who have signed onto the petition opposing  GMO salmon.