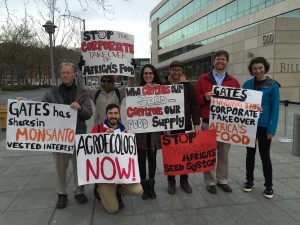 On March 23, 2015 the Bill and Melinda Gates Foundation (BMGF) and the United States Agency for International Development (USAID) sponsored a secret meeting in London to promote a recent report they commissioned detailing in clear terms how to privatize the seed and agricultural markets of Africa- without African stakeholders having a seat at the table. CAGJ/AGRA Watch and Global Justice Now coordinated simultaneous actions in Seattle and London.