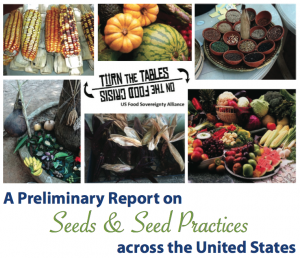 CAGJ is a founding member of the US Food Sovereignty Alliance and is proud to have contributed to this report!

The U.S. Food Sovereignty Alliance today released A Preliminary Report on Seeds and Seeds Practices in the US in celebration of La Vía Campesina’s International Day of Farmers’ and Peasants’ Struggles – April 17.

The Report is based on surveys of seed savers and seed advocates from around the United States. It documents who saves seeds, as well as why, where and which ones. Responses reveal that many growers save and share seeds to produce healthy food, preserve their cultural heritage, and to defy efforts by transnational agribusinesses to solely promote their costly, patented and genetically engineered varieties.

The report is especially pertinent during 2014, the International Year of Family Farming, as designated by the Food and Agriculture Organization of the United Nations. Based on the surveys and the Call to Action of the US Food Sovereignty Alliance, the Report provides individual, community, national and international action recommendations aimed at defending seeds from privatization and preserving them for the common good.

As a member of the U.S. Food Sovereignty Alliance, Community Alliance for Global Justice joins in presenting this report in solidarity with La Vía Campesina in its global efforts to defend food and seed sovereignty. Read the report here!