This speech was given by Reverend Robert L. Jeffrey Sr. of Seattle WA at the No More NAFTAs, Stop the TPP (TransPacific Partnership) Rally on January 31, 2014, and is reprinted here with permission. Reverend Jeffrey is Executive Director of Black Dollar Days Task Force and Clean Greens Farm & Market. 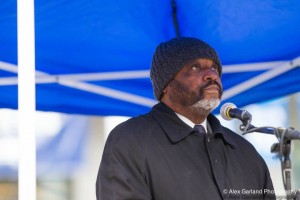 One of the major problems with NAFTA, and subsequently the TPP, is that it has provided fertile ground for agribusinesses to grow and to flourish by displacing millions of small Mexican farmers and gobbling up vast areas of farm land, creating stiff and unfair competition for farmers and ranchers in the United States.  The result of this agribusiness land grab is the victimization of Mexican farms and farmers, subjecting the farms to Monsanto like product producing practices, in addition to subjugating formerly independent farmers to the choice of living in squalid conditions for poverty wages on large plantations, or migrating to the already teaming rolls of the unemployed in Mexico City, while leaving American small farmers and ranchers to face the growing problem of plummeting exports.

When will we learn, that putting the food supply in addition to our environmental future into the hands of people whose only concern is profit, even at the expense of community, is a morally bankrupt policy?

These policies are morally bankrupt because they create by their design an invasive corporate welfare system that maintains and promotes the existing corporate model and mind-set.  Its design by its very nature impedes the natural evolutionary progression of civilization by forcing upon it a dominating corporate reality that is already destroying the world.  In effect what these policies do is to make permanent through dominant expansion, an imperfect corporate system dependant on fossil fuel, worker exploitation and genetic earth altering engineering.

If there is to be global economic dialogue, let it began from the bottom up, not from the top down.  Corporate controlled governments do not speak for the hopes and dreams of the masses of people that are affected by these policies.  The people must be allowed to speak directly with each other.  Small farmers must unite with other small farmers, and create inter-national farm collectives that can assure food security.  Industrial workers must unite and create international workers unions that can prevent the continued exploitation of workers.  We need to develop community based financial development agencies that will become community based international monetary funds that can fuel the development of international small business opportunities.

As Dr, Martin Luther King Jr. reminds us “change does not roll in on the wheels of inevitability, but comes through continuous struggle.  And so we must straighten our backs and works for our freedom.  A man he states can’t ride you unless your back is bent.” Today our collective backs have become bent by relying on political systems that are bought and paid for, by both the money of the rich and the judicial cowardice of those sworn to up hold the constitution of the United States of America.  It is bent by the force of international police states that pretend to be democracies.  It is bent by the magnitude and scope of what is being done both to the world to its environment and to its citizens.  Our backs are being bent by illegal corporate wars that leave many paralyzed by the pseudo patriotic ranting of those who use legitimate despair as a means of increasing their corporate wealth and power.

Never the less, it is up to the people of good will, those who still believe in the moral imperative of justice for all, to take up the quarrel with the foe.  The torch of generations of men and women who have fought and died for economic and social justice, for collective bargaining, for community based food sovereignty, for the preservation of our environment, is now in our hands.  Let us not break faith with this great endeavor.