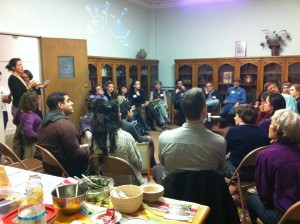 Thank you to everyone who attended and helped organize our latest Community Meeting and the Stop the TPP Rally. Click here to see pictures of the Community Meeting and the Rally on our Facebook page. We had over 40 people attend our Community Meeting including core activists and first-timers! CAGJ members gave short presentations on our organizing priorities for 2014, the Food Justice Project and Trade Justice, with a special highlight on the AGRA Watch Campaign. Attendees were excited to sign up to become members and volunteer! If you were not able to attend the meeting, but are interested in getting involved with CAGJ click here or upcoming events and meetings or send us an e-mail.

A special thanks to our community partner, Central Co-op, for donating the food! Treats included Chocolate Beet Cake and Kale Salad from CAGJ’s book, Our Food, Our Right: Recipes for Food Justice. 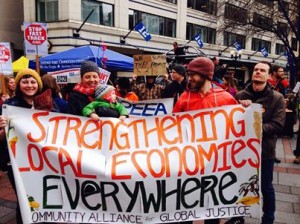 st 300 people at the “No More NAFTA’s – Stop the TPP” Rally to stand in solidarity with our trade justice allies in Mexico, Canada and across the U.S.  It was part of an Inter-Continental Day of Action called for by Mexican activists. Seattle was one of fifty cities that held actions across North America. An impressive list of community leaders representing unions and social justice organizations spoke passionately about how the passing of Fast Track and the TPP could have detrimental effects on our environment, economic rights and our food systems. We would like to give a special thanks to Rev. Jeffrey, Executive Director of Clean Greens Farm and Market, who gave a very compelling and moving speech linking the dangers of the TPP and the local food community.

Fast track legislation is being considered right now. If approved, it would give all decision-making authority about the TPP to the executive branch and limit our elected officials and the public’s input into this process. Our call to action:  Urge Congress to Vote No on Fast Track Legislation. Go to www.stopfasttrack.com for any easy way to contact your Representatives!  For more information, check out CAGJ’s Trade Justice webpage. Stay tuned for more ways to take action against the TPP!

We have an exciting year ahead! Join us as we build community, have fun and make change!