SEE LINKS TO PHOTOS & VIDEOS BELOW! 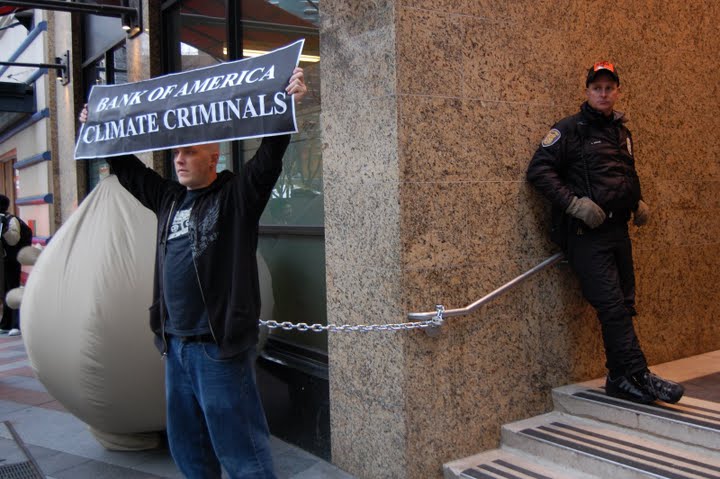 On November 30th, 2009, 10 years after the historic shut-down of the WTO meetings in Seattle, people again made their voices heard on many of the pressing issues we face today.  As protests, teach-ins, and civil disobedience took place around the country on Mobilization for Climate Justice’s Day of Action at Westlake Park in Seattle multiple groups rallied, demonstrated, and took action at noon for climate justice.  Street theater lampooned the current regime’s failure to include or empower people in solutions to the climate crisis, as the COP15 climate talks in Copenhagen loom large, highlighting the need to organize globally and make those voices heard.

Much of the focus was on Chase and Bank of America, two of the major funders of the coal industry and the controversial practice of mountain top removal mining, and two were arrested after a lock-down civil disobedience protest at the Westlake branches of each bank, calling out both banks as “Climate Criminals” (for more information, see Rainforest Action Network’s great resources here).  The Yes Men supported an action exposing the truth of Bank of America’s stance on coal and mountain-top removal funding, as two official-looking bank representatives addressed the cameras and the crowd promising clean coal while reaffirming a commitment to their shareholders’ bottom line.

At 1:30, a contingent of fair trade activists marched to Rep. McDermott’s office with hundreds of signed postcards from constituents, encouraging him and other congresspeople to take a stand for workers’ rights worldwide by supporting the TRADE Act.  The TRADE act is an alternative to the failed NAFTA model of free trade, envisioning what a truly just trade agreement might encompass.

After more music and performance from the stage at Westlake, the Washington Immigrant Rights Action Coalition held a march to Pacific Place mall in support of about 100 janitorial workers who are being unfairly treated and fired by Seattle Building Maintenance. People entered Pacific Place to chant, sing, and express their disgust with the mistreatment of workers, and were escorted out by mall security.

You can see video of the climate justice actions here, here, and here, and some great pictures of the whole day’s events can be seen here and here.