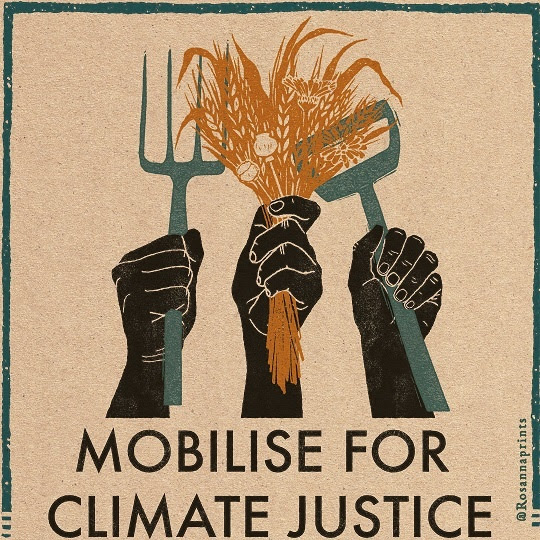 (Harare: 25 October 2021) It’s the most chaotic climate year on record, since last year, and corporate-controlled governments, transnationals, philanthropists, mainstream media and most non-governmental organizations (NGOs) are offering more of the same: market-based solutions and risky techno-fixes. Two years into a global pandemic that has taken the lives of untold millions, humanity wakes daily to historic floods, fires and drought-caused famines along with extremely erratic weather that makes life increasingly difficult to bear. Those in power blame ‘general human activity’ for climate chaos, overlooking the intimate links between fossil fuel extraction, corporate agribusiness and the military industrial complex, not to mention global power imbalances and historic responsibilities of countries that have enriched themselves through colonial plunder. Instead of a truthful and transformative way forward, we are sold false solutions that never fail to prioritize corporate elites – “net zero”, “nature-based solutions”, “geo-engineering”, and the “digitalization of agricuture”, just to name a few. This has to stop, now!

Halting the climate crisis requires system change rooted in the rights of humanity and Mother Earth. For over 500 years, the colonial turned corporate patriarchal food system has attempted to dominate all forms of life for the enrichment of a few. Those who control the accumulated wealth – produced by people and the planet over centuries – have so far escaped the wrath of floods, droughts, degraded soils, war and hunger. They ignore the ample signals of the breakdown of the natural systems that sustain life and instead propose that we, the most vulnerable of victims, bear the greatest burden. For La Via Campesina (LVC) and our organized diversity of peasants, migrants, land workers, fisherfolk, forest dwellers, rural women, youth and others, our solution to the climate crisis is a just transition rooted in struggle and solidarity – internationalist solidarity with all who struggle for Food Sovereignty, Climate Justice, and the Rights of Mother Earth! It’s a struggle for the full realization of all the rights and responsibilities detailed in the UN Declaration on the Rights of Peasants and Other People Working in Rural Areas (UNDROP), especially the Right to a Clean, Safe and Healthy Environment (Article 18) recently ratified by the UN Human Rights Council for all of humanity. It’s also a struggle against the corporate capture of UN spaces through the “multi-stakeholderism’ better known as ‘stakeholder capitalism’, witnessed by all at the so-called UN Food System Summit of 2021 and ever increasingly at the UN Climate COPs.

As we brace for another painful UN Climate Conference – Glasgow’s COP26 – the 200 million land, water and territory defenders of LVC rise again to demand Food Sovereignty for Climate Justice. We join a large convergence of struggles against fossil fuel capitalism, racism, colonialism, and the patriarchy that binds them. As we struggle to hold the corporates responsible for this needless destruction, we stand proud with the Landworkers’ Alliance (LWA) – our LVC member organization based in Scotland, England and Wales. LWA is working tirelessly to bring the voices of agroecological land workers to COP26 by calling for “recognition of the contribution that agroecological farming, sustainable forestry and better land use can make towards our commitments to reduce emissions, sequester carbon and build resilience.”

Corporations beware, the land workers of the world have real solutions: food, farming and forestry systems that serve the people, climate and nature! Alongside our LWA and all who struggle for a just transition, we will again stand united in opposition to any attempts made to turn the UN Framework Convention on Climate Change (UNFCCC) into one giant “market mechanism.” Climate Capitalism is a Crime, Not the Solution!

An outgrowth of the fossil fuel industry, the transnational food system is one of the primary culprits of the climate crisis, contributing some 44 – 57 percent of global GHG emissions. This system alienates people from the land, degrades communities and drives violence and inequality across territories worldwide. It is especially harmful for women and youth whose lives and work are undermined by a system that does not value life.

Long before COP21 in Paris, multinational agribusiness and fossil fuel corporations were already using their power and influence to promote policies at national, subnational and global levels. The 2015 Paris Agreement created a “consensus” of sorts around several very problematic false solutions. Carbon trading and offsets mechanisms contained in Article 6, for example, will put significant power in the hands of wealthy governments, corporations, bankers and traders whose primary objective is to maximize profits not to take care of Mother Earth. Instead of taking decisive actions to adapt to climate change and commit to an honest transition towards democratic and human rights-based food systems, powerful actors are using “net zero” pledges to hide their climate inaction.

Net zero allows companies to buy their way out of responsibility for historic and on-going emissions, prioritizing initiatives that favour the corporate bottom line. Wherever the corporates promote ‘Nature Based Solutions’ (NBS), we caution of nature-based dispossession through forest and soil carbon offsets schemes premised on the false claim that paying someone else to deal with carbon emissions instead of taking direct action to reduce pollution will somehow slow-down the crisis. Combating the climate crisis requires a just transition away from fossil fuels, an end to destructive mining and extractive agriculture, and a focus on recovering damaged territories and ecosystems. Our solutions – which are truly nature-based, agroecological, and peasant-controlled – are just solutions. No ‘Carbon Unicorns’ and magical thinking will solve this problem, just immediate action toward system change.

Also, what they call ‘climate smart agriculture’ we call ‘Corporate Smart Agriculture’ because it provides a framework for integrating GMOs and agrochemicals into small-scale agriculture relying on the same racist and sexist paradigm of the Green Revolution. It positions capitalist science and technology as solutions to the problems faced by “underdevelopment” and the world’s supposedly “uneducated” peasants. These original problems were created by global capitalism, theft, colonial pillage, wars and generalized violence.

While many corporate false solutions co-opt the language of Peasant Agroecology, nowhere are fundamental rights to local and nutritious food, dignified livelihoods, land and self-determination affirmed or guaranteed. What is guaranteed are endless cycles of accumulation benefiting those driving the climate crisis, including major food and agribusiness corporations like John Deere, Bayer-Monsanto, Syngenta, Cargill, Nestlé, Wal-Mart and others.

Land workers and other food producers of the world demand – and stand ready to carry out – a Climate Just Transition in Agriculture! For decades, local food producers have been pushed down the path of intensification and monocropping by corporate agribusiness and their allies. The co-opted UN Food System Summit of 2021 was just one more example. What people and the planet need urgently are governments and institutions providing publically-funded opportunities to transition towards more ecologically and socially sound farming systems. For far too long have farmers faced the blame for a model forced upon us by capital. This ends now! Society must recognize that our agricultural, water and land use systems are what they are today because of systemic pressures. As we transition away from fossil fuel capitalism, we must not lose farmers, destroy livelihoods, or healthy food production capacity. Government support for grants and training programmes to support transition are essential, and this Just Transition in Agriculture must be centred on principles of Climate Justice. This means that all those involved in the food chain – including peasants, pastoralists, migrant workers, contract workers, landless people, and indigenous people – must be front and center defining and implementing the public policies required for this transition.

As La Via Campesina we call for an end to all false solutions and market mechanisms in Article 6. We demand a just transition to Real Zero, not the corporate marketing schemes hidden behind ‘net zero’. At the same time, and of the utmost importance, we call on all former colonial powers to take on their historic responsibilities and drastically cut emissions at the source, now, including through an immediate drawdown of their military presence around the world! La Via Campesina stands in solidarity with the victims of all wars, sanctions and occupations – be they the maimed and murdered of Palestine, Iraq and Afghanistan or the poor, working and indigenous people of the United States lacking hospitals, schools and daily bread. For Food Sovereignty, Human Rights and Mother Earth – Defund the War Machine!

The pathways to achieving climate justice must be radically different from the ones which produced the crisis. Peasant Agroecology and Food Sovereignty can ‘feed the world and cool the planet’! They offer the very real possibility of reducing emissions and realizing social justice, the rights of people and the planet. A food system based on Food Sovereignty and localized food systems, one fed by family farmers using peasant agroecology, can truly transform society while reducing carbon emissions dramatically and much sooner than any false solutions sold by the corporates. All of this can be done without commodifying carbon, and, at the same time, contribute to strengthening grassroots democratic solutions to poverty, hunger and violence.

Agroecological land, water and territory defenders of the world unite! With food producers at the forefront of our global convergence for a Food Sovereignty that feeds Climate Justice, life will prevail over death!

THE TRANSITION IS NOW!

Learn what data each type of cookie collects. These cookies will be stored in your browser only with your consent. You also have the option to opt-out of these cookies. But opting out of some of these cookies may affect your browsing experience.
Necessary Always Enabled
Necessary cookies are absolutely essential for the website to function properly. These cookies ensure basic functionalities and security features of the website, anonymously.
Functional
Functional cookies help to perform certain functionalities like sharing the content of the website on social media platforms, collect feedbacks, and other third-party features.
Performance
Performance cookies are used to understand and analyze the key performance indexes of the website which helps in delivering a better user experience for the visitors.
Analytics
Analytical cookies are used to understand how visitors interact with the website. These cookies help provide information on metrics the number of visitors, bounce rate, traffic source, etc.
Advertisement
Advertisement cookies are used to provide visitors with relevant ads and marketing campaigns. These cookies track visitors across websites and collect information to provide customized ads.
Others
Other uncategorized cookies are those that are being analyzed and have not been classified into a category as yet.
SAVE & ACCEPT
Powered by