Community members gathered at the University of Washington near Red Square to paint a mural with the message “Honor Indigenous Knowledge! Block Corporate Salmon!” They aim to bring attention to the wide-spread opposition to AquaBounty’s GE salmon, the first genetically engineered animal approved for human consumption. The Block Corporate Salmon campaign is organized in solidarity with Indigenous communities and Salmon Protectors who have opposed GE salmon since its development was announced.

“It’s a global travesty that AquaBounty is harvesting Genetically Engineered salmon that never touched nature,” Carl Wassilie, Yup’ik Biologist and organizer stated. “It’s an insult to all beings that rely on healthy watersheds and healthy ecosystems that a company is willing to replace a keystone species like salmon for profit. As an Indigenous Salmon person, I am appalled at the unethical and immoral actions of AquaBounty and their political servants to allow Genetically Engineered and Genetically Modified Organisms to be allowed in our Food Systems. It’s not only an insult to salmon fisher peoples, but a direct attack on the sacred and spiritual importance of salmon to Indigenous peoples. We need healthy salmon streams and ecosystems, not the fake GE salmon in warehouses! We need to protect the Keystone Salmon habitat and biodiversity and Indigenous cultural integrity for future generations.” 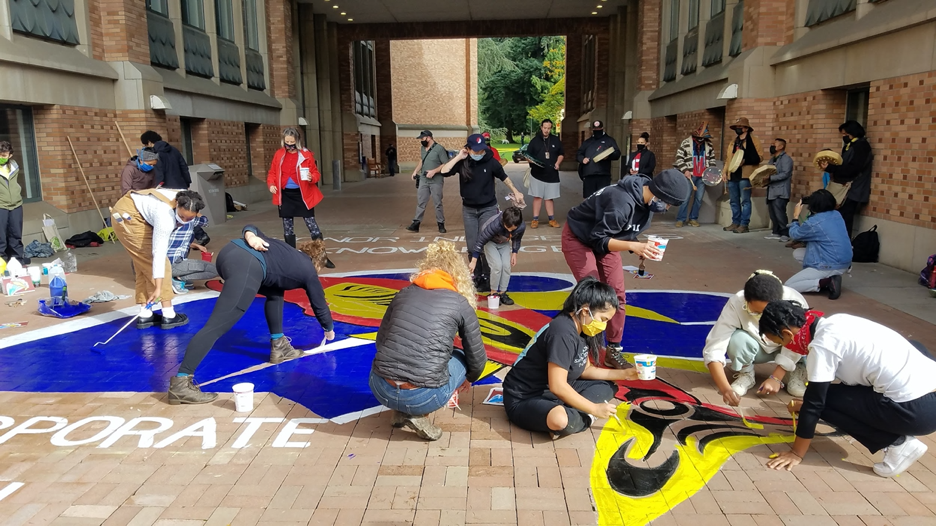 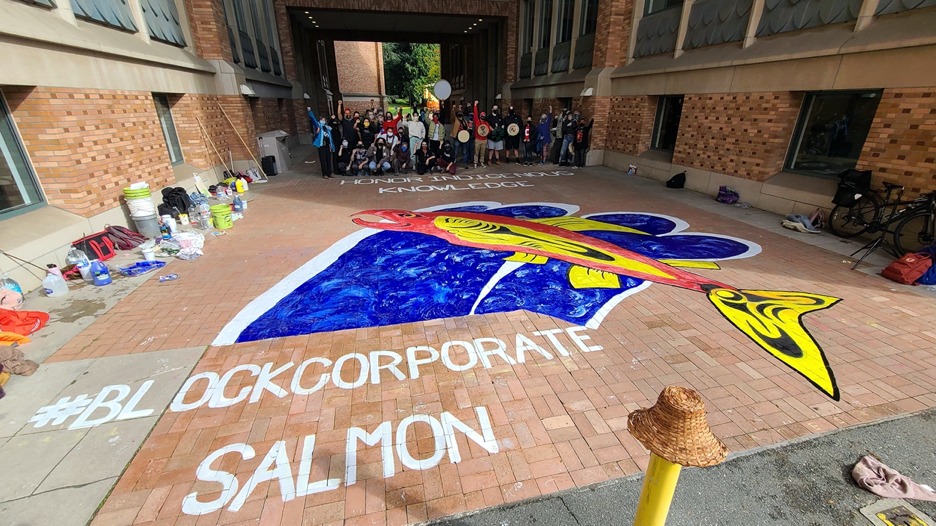 (Photo Description: Painted mural of a Salmon in the water. The words “#BlockCorporateSalmon” are written below the mural and the words “Honor Indigenous Knowledge” are above the mural. Community members in the back of the photo are raising their fists in solidarity.) 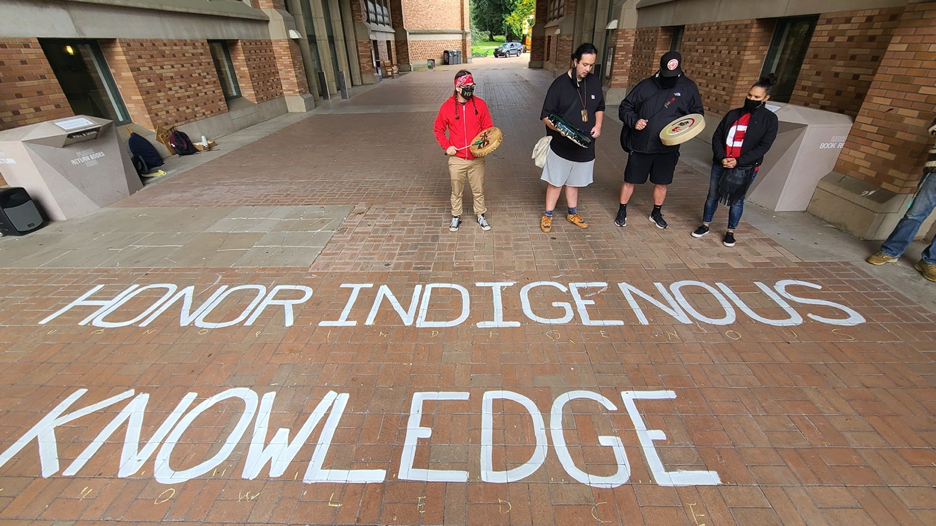 The actions are part of the nationally coordinated Block Corporate Salmon campaign, which aims to protect wild salmon and the ocean for future generations by disrupting the release of genetically engineered salmon. In the long term, the campaign also plans to stop the AQUAA Act, a federal policy that would allow industrial-scale aquaculture in U.S. federal waters. UNR Seattle members protested GE salmon at the University of Washington because of its institutional role in upholding industrial aquaculture as a Sea Grant university. “The University of Washington is one of the most influential Sea Grant Universities in the U.S.,” stated Yasmin Ahmed, staff at UW and 2018 alumni. “With the funding they’ve gotten as a Sea Grant, they have produced a ton of research around improving offshore aquaculture. They are helping support the problem, and that is such a shame.”

The mission of its research center, Western Regional Aquaculture Center (WRAC) is “to support aquaculture research, development, demonstration, and education to enhance viable and profitable U.S. aquaculture production.” Despite being located on the original land of the Coast Salish peoples, WRAC actively excludes native communities that view salmon as sacred to their ways of life. Raising the banner at the Chief Seattle statue called attention to the colonial approach of GE salmon and industrial-scale offshore aquaculture, in which there is no consent from Indigenous communities who center salmon in their culture, forcing them to respond rapidly to the release of GE salmon, as with the escape of Atlantic salmon from Cooke Aquaculture’s collapsed net pens in 2017.

Salmon populations have been declining, and their survival is threatened by dams and other environmental causes that harm their traditional migration routes. Pacific Northwest Tribes have organized strong opposition to GE salmon and its threats to our food system and ecology. The Quinault Indian Nation is a plaintiff in the lawsuit against the Federal Drug Administration for approving GE salmon without adequately reviewing environmental impacts. Along with the Quinault, Muckleshoot and Duwamish Tribal members have been educating their communities and the wider public on the harmful impact of GE salmon to their traditional ways of life. “It’s not actually very nutritious. The product contains 33% less healthy fats than wild salmon does,” says Valerie Segrest, Muckleshoot Tribal member and nutritionist. “There is limited transparency and it’s detrimental to our fish economy. It is profoundly disrespectful to capitalize on the legacy of a cultural keystone species, and the nutrition and good medicine that salmon carries, that my ancestors and my family have organized our lives around for so long.”

“Humans did not create the web of life nor have the knowledge, wisdom, or moral imperative to continue down this path by attempting, in this case, to alter the biological makeup of ocean ecosystems,” says BJ McManama, Indigenous Environmental Network Organizer with the Stop GE Tree Campaign. “There is a deep complexity to how every organism contributes to these unique systems and we have little knowledge in regard to the interconnections of all life in totality. As Indigenous Peoples we are bound to revere, celebrate, and respect this complexity as sacred.”

Community members at large are calling for a boycott of GE salmon that AquaBounty plans to release onto the market this fall, and ask that those who are concerned sign their petition: bit.ly/boycottGMOsalmon. 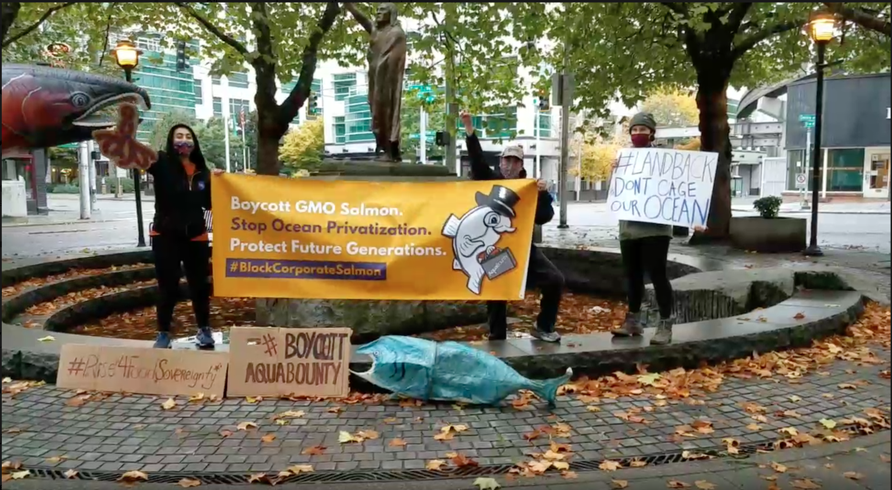 Uprooted & Rising (UNR) is a national movement building energy towards food sovereignty in the U.S. UNR is standing up against corporate control and white supremacy in our food system while calling on higher education to stop supporting Big Food companies through contracts and industry skewed research. We will create a culture shift through public action, digital organizing, and creative storytelling that centers the ideas and experiences of those who have been most marginalized by this food system. To learn more about UNR, visit uprootedandrising.org. To learn more about the Block Corporate Salmon campaign, follow @blockcorporatesalmon on Instagram and fill out the form: bit.ly/unrocean

About Community Alliance for Global Justice:

Community Alliance for Global Justice (CAGJ) is a Seattle-based grassroots organization that educates and mobilizes to strengthen the global food sovereignty movement.  organizes for food sovereignty using a racial equity framework prioritizing those most impacted through movement building and shifting the narrative about food systems to uplift food sovereignty and agroecology. In 2018 CAGJ and the Muckleshoot Food Sovereignty Project co-produced the 4-minute film “Salmon People: The Risks of Genetically Engineered Fish for the Pacific Northwest” viewable at cagj.org/salmonpeople. To learn more about CAGJ go to cagj.org.