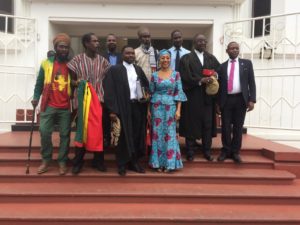 In early July 2019, Food Sovereignty Ghana (FSG) appeared before the Supreme Court to challenge a High Court’s jurisdiction to rule on genetically modified organisms (GMOs). The Supreme Court ruled that the Human Rights Court did have proper jurisdiction to rule in the case, after arguments from Counsel George Tetteh Wayoe that introducing GMOs would have serious implications on the human rights of Ghanaians. In the Human Rights Court, the case will hopefully receive unbiased attention and judgement.The Human Rights Court ruled in favor of FSG on June 7, their last appearance before the high court.

“For us, the case is clearly a case of human health versus corporate profit.”

FSG hails the Supreme Court ruling as an important victory over local and international GMO lobbies that have been eager to introduce Bt cowpea and GM rice with little or no evidence of the potential consequences on human health. The Bt cowpea has not been commercialized anywhere in the world; in Ghana, cowpeas are found in several staple foods, so the health impact of Bt cowpea could be devastating if not regulated.