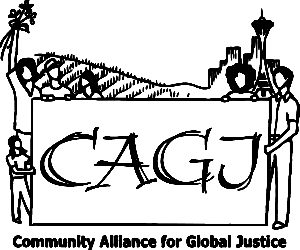 SEATTLE, WA April 9, 2019 – Tonight, Northwest tribal leaders and food system advocates speak on a panel about the first-ever genetically-engineered animal to be approved by the FDA, GE salmon, which could begin commercial sales across the country. The event will start off with a screening of Salmon People: The Risks of Genetically Engineered Fish for the Pacific Northwest, a 4-minute film released in 2018 by Community Alliance for Global Justice (CAGJ), and co-produced with the Muckleshoot Food Sovereignty Project (MFSP) and New Canoe Media. Tonight’s panel includes two people featured in the film: President Fawn Sharp of the Quinault Indian Nation and Valerie Segrest, founder of MFSP and Executive Director of Feed Seven Generations.

Who: Media and community are invited to hear from indigenous leaders and advocates, featuring:

Panelists will be available for media interviews 6-7pm.

“Salmon is the pillar of our culture,” says Segrest. “For thousands of years the Coast Salish people have organized our lives around salmon. Corporate ownership of such a cultural keystone is a direct attack of our identity, and the legacy our ancestors have left us.” President Sharp adds that “For man to think that they could somehow modify [salmon] and make it better is very arrogant. It’s not right. And from our perspective it’s culturally inappropriate.”

Northwest Tribes have passed multiple resolutions urging federal agencies to stunt GE salmon production and distribution, and for industry and state actors to confer with their Tribal governments. The Federal Drug Administration did not consult indigenous groups or Tribal governments. In February, the U.S. Department of Agriculture published GE labeling guidelines that do not require GE products to be labeled “genetically engineered”, which confuses consumers and paves the way for GE salmon to enter the U.S. market without clear labels. In March, the FDA lifted the import ban on eggs of AquaBounty’s GE Atlantic salmon product, creating a loophole that allows for GE be sold commercially.

“Salmon depletion should not be addressed by a very futile and reckless strategy from those who stand to gain profit from their efforts,” says President Sharp. “The Quinault Nation is not unique among our family tribal nations that understand when we legislate and make good public policy we have to make informed decisions. In our review of the science that has been made concerning genetically engineered salmon, it’s not entirely objective when we look at who is paying for various elements of the research.”

Public opposition and community organizing have resulted in over 80 retailers committing to not selling GE salmon. Dana Perls will offer background to the legislation recently re-introduced by Senator Cantwell and others that would require the FDA to label GE salmon, and growing consumer advocacy around the risks of GE fish.  President Sharp will give an update on the ongoing lawsuit against the FDA, to which the Quinault Nation is a party. Alan Stay will give background to the tribal treaty rights to salmon and co-management of Northwest fisheries.

Tonight’s event comes at a timely moment for the public and media to hear directly from indigenous leaders on how GE salmon is at the center of the struggle of Native tribes in protecting wild salmon’s essential ecological and cultural role. Tickets are $5 and can be purchased at townhallseattle.org/event/salmon-people and at the door. No one will be turned away for lack of funds.