This backgrounder is part of the Study Guide for the short film “Salmon People”. Check out our Film Study Guide, and Resources on GE Salmon and Northwest Native Resistance. Click here for the PDF: CAGJ Salmon People Backgrounder. 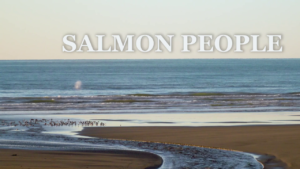 Watch the short film! Salmon People: The Risks of Genetically Engineered Fish for the Pacific Northwest

“Salmon People: The risks of genetically engineered fish for the Pacific Northwest” is a short film that centers Coast Salish perspectives on why people in the Northwest should be concerned about genetically engineered salmon production, situating this development in the context of a longstanding struggle to have treaty obligations upheld.

In Honor of Indigenous Food Sovereignty

In the Northwest,we live on Coast Salish land. Those of us who are non-Native U.S. citizens are treaty partners with Coast Salish tribes, who have observed and sustained the invaluable salmon fishery for thousands of years. We believe that as we collectively consider the implications of GE salmon entering our food system, tribal perspectives should be at the center of that discussion.

Food Sovereignty is the right of peoples to healthy and culturally appropriate food produced through ecologically sound and sustainable methods, and their right to define their own food and agricultural systems. Farmers and fisherfolk play a vital and indispensable role in our communities and as stewards of the environment; agricultural and fisheries food sovereignty upholds people and the planet over corporate control.

When colonial settlers arrived in the Northwest in the 1800s, they were astonished by the abundance of salmon. They were wrong in ascribing that abundance to pristine nature. In fact it was a legacy produced in part by Coast Salish people and their technologies over thousands of years. During the treaty negotiations that took place in the 1850’s, the tribes in this region signed those documents with the contingency that their relationships with salmon would be secured in perpetuity.

Those treaty agreements have been transgressed, and have had to be fought for, since that time. (Read more about this history here and here and on the leadership of Billy Frank Jr. here).

No industry or state actor has conferred with any Northwest Treaty Tribe about the production of a genetically engineered (GE) fish. Yet in 2015, the Federal Drug Administration greenlighted GE salmon to enter U.S. food markets, despite official resolutions on the part of tribal governing bodies to do so.

That GE fish is AquaAdvantage Salmon, the product of biotech corporation AquaBounty. It is  the first-ever GE animal to be approved for human consumption anywhere in the world. 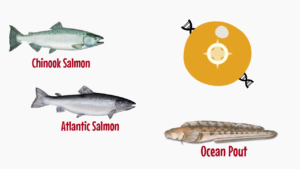 AquaAdvantage Salmon is engineered by artificially combining the genome of an Atlantic salmon with the growth hormone gene from Chinook salmon and DNA from the anti-freeze genes of an eel-like ocean pout. The result is a transgenic (not just genetically modified) animal, involving the transfer of genes from one species into another. This engineered gene transfer causes the production of a growth hormone year-round, resulting in a fish that AquaBounty claims grows at twice the rate of conventionally farmed salmon.

The safety of AquAdvantage Salmon – from both an ecological and public health standpoint – has been called into question by Northwest Tribes as well as prominent environmental and food safety groups. Northwest Tribes have taken these actions to block the approval of GE salmon to protect Salmon Nation:

In the Northwest, the prospect of transnational biotech company based out of Boston being able to sell and/or distribute a transgenic Atlantic salmon is an affront to the enormous, decades-long investments made in restoring depleted wild salmon populations through funding, research, and regulation. 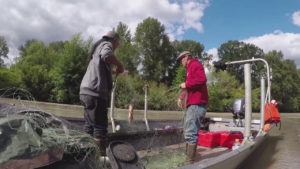 Salmon are a keystone species that support land and water ecosystems throughout the region. However, salmon recovery efforts in Washington State have prioritized the salmon farming industry’s importance for the state economy over the regulation of the industrial impact on salmon habitat. This has made the crucial migration routes of wild salmon impossible.

Salmon depletion is not simply a story of overfishing, but one of how salmon habitat has been degraded by technologies tied to logics of extraction for profit. However, the success of salmon restoration after hydrodam removal shows that salmon can repopulate if their environments are restored.

Northwest Treaty Tribes have been especially vocal that declines will persist until salmon habitat is adequately restored, and industries are stopped or regulated for their degradation of waterways and interruption of salmon migration flows. Tribes have argued that the resources that would go toward building a global infrastructure for GE salmon production and distribution takes away from resources committed to restoring salmon habitat in the first place.

AquaBounty Technologies paints AquAdvantage Salmon as a technological solution not only to salmon depletion, but to climate change and hunger. Yet this logic of “techno-fixes” to systemic environmental and social problems only kicks the can down the road, rather than addressing the root causes, such as overfishing and prioritizing industry over ecosystem stability. 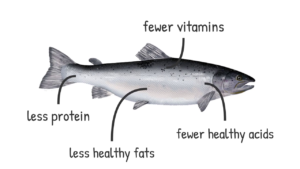 Mike Crewson of the Tulalip Tribes Natural Resource Department speaks to the shortsighted logic of AquaBounty: “Cheaper, quickly-maturing, genetically-engineered salmon grown in hatcheries are just another gimmick that takes the focus off of the need to protect and restore salmon habitat and rebuild self-sustaining wild salmon populations. Essentially, this undermines the Tribes’ and other’s salmon recovery focus on rebuilding natural salmon runs by restoring habitat and protecting the environment needed to support healthy natural and hatchery production.”

AquAdvantage Salmon and the Ecological Risks of Salmon Fish Farms

As of April 2018, AquaAdvantage Salmon is being grown in fish farms (a kind of aquaculture) using net pens in Panama and Prince Edward Island, Canada. AquaBounty is seeking approval to open a growing operation in Indiana and has already invested in a facility there. It will undoubtedly seek to expand operations, and the Pacific Northwest could become a targeted location.There have been no recorded sales in the US as of yet, and the corporation has done a great deal to hide its distribution markets in Canada.

In the Pacific Northwest, aquaculture production is becoming a more politically contested industry due to hazards it poses to native, wild Pacific salmon. AquAdavantage Salmon have been engineered to be voracious eaters in order to reach 2-3 times the size of an adult Atlantic salmon in just a few years. This is the company’s way of producing cheap, edible biomass. As competitors and predators, they represent an unprecedented threat to Pacific salmon. This a risk that clearly calls for invoking the precautionary principle, the notion that if there are possible significant public health or environmental risks, policy-making decisions should lean toward taking precautionary measures.

The Lummi Nation has been at the forefront of organizing to ban net pen aquaculture in Washington State waters, and to hold Cooke Aquaculture accountable. Lummi Chairman Jeremiah Julius stated, “We never gave up the waters in our treaty. When we entered into this agreement with the United States, we were guaranteed the right to fish. And in order to fish, the environment’s got to be in a great condition. And right now it’s all but destroyed. What are perceived as little things like this spill — it’s not a little thing. It’s a big thing.”

Enormous public support for a ban pressured the WA State legislature to pass a bipartisan bill signed into law by Governor Inslee in March 2018, phasing out fish farming by 2025. The aquaculture ban is a crucial step, but other measures must be taken.

AquaBounty Technologies claims to have addressed the dangers of escaped GE salmon interbreeding with wild salmon in its own production model by using land-based facilities only producing female eggs. However, land-based facilities remain vulnerable to various confinement failures, including transportation accidents and storm damage. The kind of regulation AquaBounty Technologies is now promising involves expensive, intricate infrastructures that become less credible given the current Administration’s efforts to dismantle U.S. regulatory bodies such as the EPA and FDA. 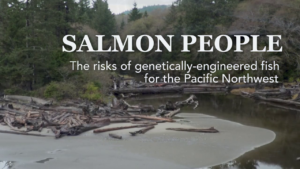 In 2016, Muckleshoot Food Sovereignty Project and Community Alliance for Global Justice formed a collaborative campaign to stop GE salmon from entering U.S. food markets and coastal production facilities across the Western Hemisphere. This alliance came on the heels of the FDA’s approval of AquAdvantage Salmon.

The campaign builds on the previous work of both organizations. CAGJ’s Food Justice Project has been engaged in the struggle against genetically engineered salmon since 2015. That year CAGJ partnered with Friends of the Earth in a successful campaign to pressure Costco to commit to not selling GE salmon. As partners, CAGJ and MFSP are working together to put some of the focus on how this is a treaty rights issue, and to amplify why Northwest Native approaches to salmon management are so important for the survival of Pacific salmon. U.S. co-management with Tribes to secure that survival represents a fiduciary obligation on the part of the U.S. government. Our campaign promotes the work of Northwest Tribal leaders and governing bodies that have organized around their concerns about the introduction of global GE salmon production infrastructures—what they mean for Coast Salish people, for the salmon that migrate through Pacific Northwest waters, and for the future of the Salish Sea.

Join CAGJ as a Member, and volunteer with the Food Justice Project to get involved in our campaign in solidarity with Muckleshoot Food Sovereignty Project and all Northwest Tribes.

Take Action! Contact your Senators to urge them to support the Genetically Engineered Salmon Labeling Act.