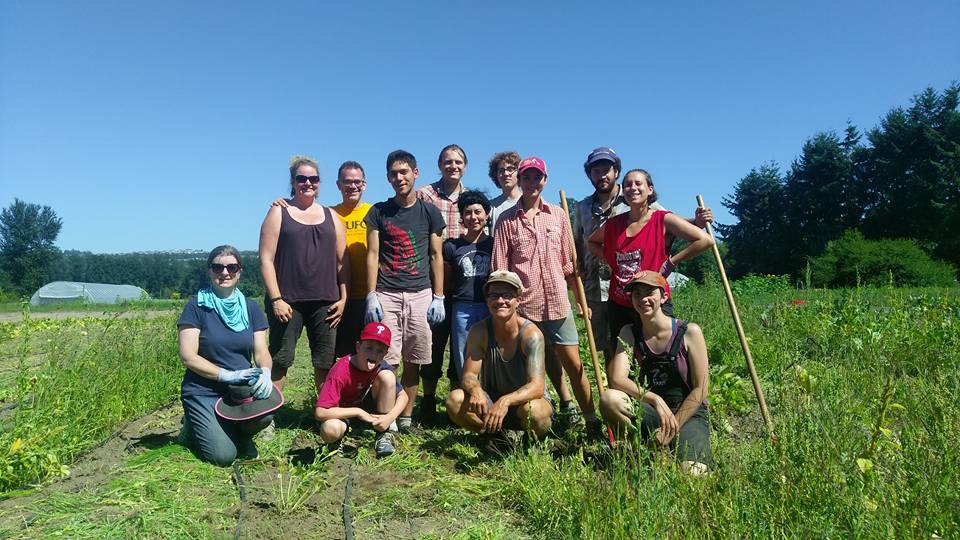 CAGJ’s trip to the Mother Earth Farm in Puyallup on July 29, 2017 almost looked like just another day in rural life. Our volunteers met Grayson and Albi, two of the farm managers, took a stroll through the fields where the organic produce grows, and spent a couple hours pulling weeds from a patch of squash.

Mother Earth Farm is far from “just another farm”, though. For one thing, nothing grown on their eight-acre plot is sold in grocery stores. Instead, all the produce is donated to area food banks and given away to those who most need healthy food. The farm also partners with inmates at the Purdy Correctional Facility — a women’s prison in Pierce County — to offer experience growing organic food.

When asked how the inmates generally feel about spending time working the farm, Grayson told us most simply relish the opportunity to be outside the prison. The farm managers often give the inmates resources for independent projects — including a thriving flower garden and a mobile, solar-powered chicken coop — that offer independence and resourcefulness that is entirely suppressed by the Prison-Industrial Complex.

In between ogling at rows of fist-size tomatoes and gleefully snacking on ripe blackberries, we learned a bit about the farm’s history. After the colonization and displacement of the indigenous peoples, the land was used for growing various types of food, in particular tree nuts such as hazelnuts.

Finally, we spent a few hours weeding through an overgrown patch of squash plants. Mother Earth Farm’s incredibly rich soil helps grow wonderful produce — but also plenty of weeds. Volunteers at the farm marvel at the “rich diversity of weeds”, according to Grayson. We dug our hands into the soil, pulled the weeds from their spots, and helped rescue troubled squash. Hard work, yes, but also rewarding work.

Through it all, though, we were reminded of the problems facing small farmers in the United States and around the world. Industrial monoculture practices — including heavy pesticide use — still dominates the area around Mother Earth Farm. Migrant farm workers’ labor runs many of the area’s farms. And increasing pressure from real estate developers threatens to turn productive farmland into suburban housing projects.

We ended the day with a reflection on what we learned. We discussed the troubles facing peasant farmers and indigenous peoples across the world. We also drew many connections between the history of industrial monoculture, plantation farming, slavery, and the modern prison industrial complex.

It was a day full of lessons on societal-scale problems. Luckily, we have folks like those on Mother Earth Farm who try to dismantle them and upend the system one step at a time.

GET INVOLVED in CAGJ!

Come to a Food Justice Project meeting where we plan Teach-Outs! We meet 3rd Tuesday every month, are all welcome. Email us for more info!