This is the third in a series of blogs about the participation of CAGJ/AGRA Watch in the 2016 United Nations Conference on Biodiversity in Cancun, Mexico. Read the first blog: Convention on Biological Diversity: what is it and why do we participate?  and the second blog: Negotiation and Dialogue at the UN Biodiversity Conference 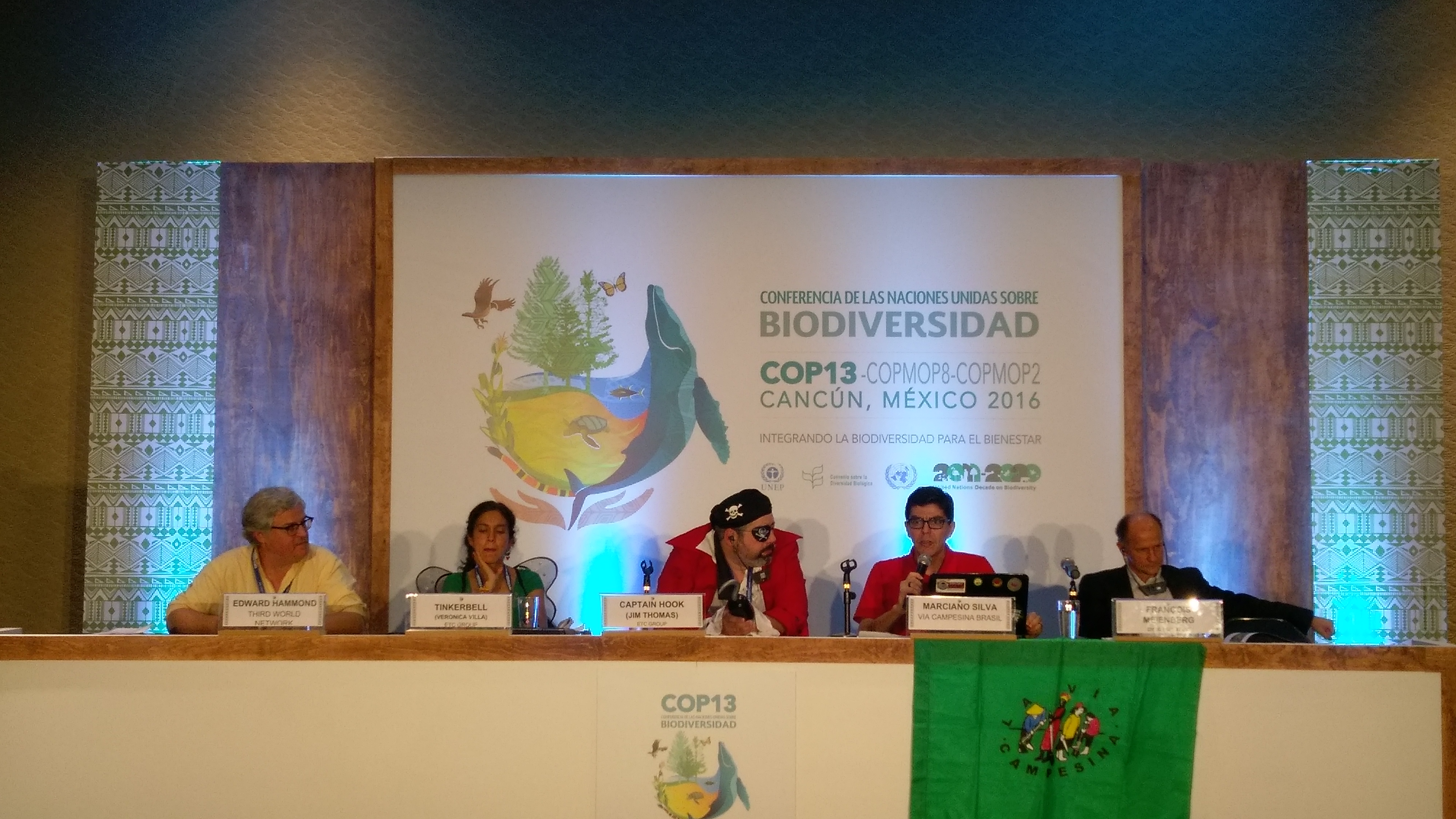 One of the most contentious issues surrounding the Convention on Biological Diversity and the subsidiary Protocols is synthetic biology. Since the beginning of this Conference on Biodiversity, we have seen the tactics and arguments on the side of advancing synthetic biology, as well as the positions and strategy organized by science-activists, researchers, and groups concerned with this technology because of its potentially adverse effects on food sovereignty, public health, and risk assessment. Today, in an action organized by civil society at the COP13 negotiations, the “Captain Hook Awards for Biopiracy”, corporations, governments, and organizations were “awarded” for their behaviors in making profit from  stolen genetic resources from indigenous peoples and local communities, while defenders of biodiversity were recognized at the ceremony for repelling biopiracy attacks.

What is synthetic biology?

So-called synthetic biology is technically an extension of genetic engineering, in which a DNA synthesiser is used to build artificial DNA from scratch – not from nature. Synthetic biology is predicted by its proponents to be a nearly 40 billion dollar industry as this technology develops for synthesis of DNA and genetically re-designed biological organisms, from pharmaceuticals to food ingredients, and – of particular concern to food sovereignty activists – genome-edited and self-replicating crops, insects, and animals.

Gene drives involve precisely cutting and editing genetic material with an additional aspect that makes it replicate the alteration when it encounters a copy of the same strand. Thus, the concern is that the technique might lead to the eradication–intentionally or unintentionally– of whole species of organisms. The scientists and industry behind gene drives are classifying it as “synthetic biology” in order to move away from the criticisms and stigmas of genetic engineering. Release of gene drives (intentional and accidental) into the environment without due risk assessment is a major concern. To those familiar with the politics of the Gates Foundation, it is not a surprise to learn that they fund synthetic biology and gene drive research. (Read more about the issues of synthetic biology and gene drives in the CBD from Third World Network, this briefing on gene drives from ETC Group, and watch this helpful video from SynbioWatch.)

The adoption of a definition of synthetic biology is one of the agenda items in the COP13 negotiations. A contact group was formed on Tuesday to come up with decisions on addressing this and other synthetic biology issues in the CBD. Socio-economic impacts, risk assessment, and precaution related to gene drives are also areas of debate in the CBD. Proponents of synthetic biology are aggressively pushing for support of the financing of research and development, while members of the civil society CBD Alliance called for a Moratorium on Genetically-engineered Gene Drives earlier in the week.

Biopiracy is the theft (and often the monopolization) of genetic resources and traditional knowledge or culture through intellectual property, patents,. More recently it has emerged that biopiracy also takes place through digital sequencing and genome editing — taken from peoples or farming communities who have developed and nurtured those resources. For an introduction to Biopiracy and the state of global discussions check out this briefing from ETC Group.

Members of the CBD Alliance, (NGOs and civil society groups), are pushing back against the adoption of these dangerous technologies in the COP13 negotiations in strategic and creative ways. 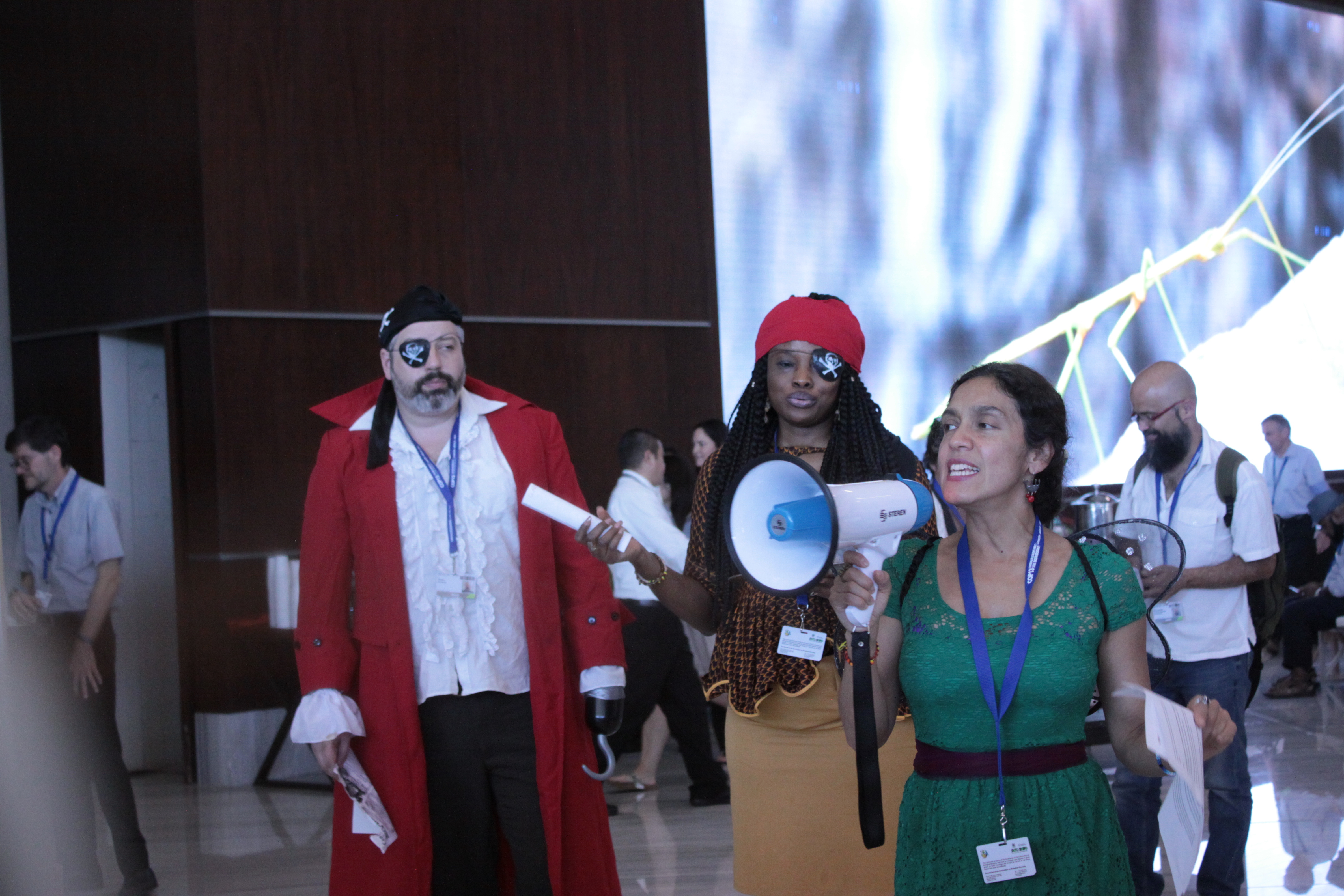 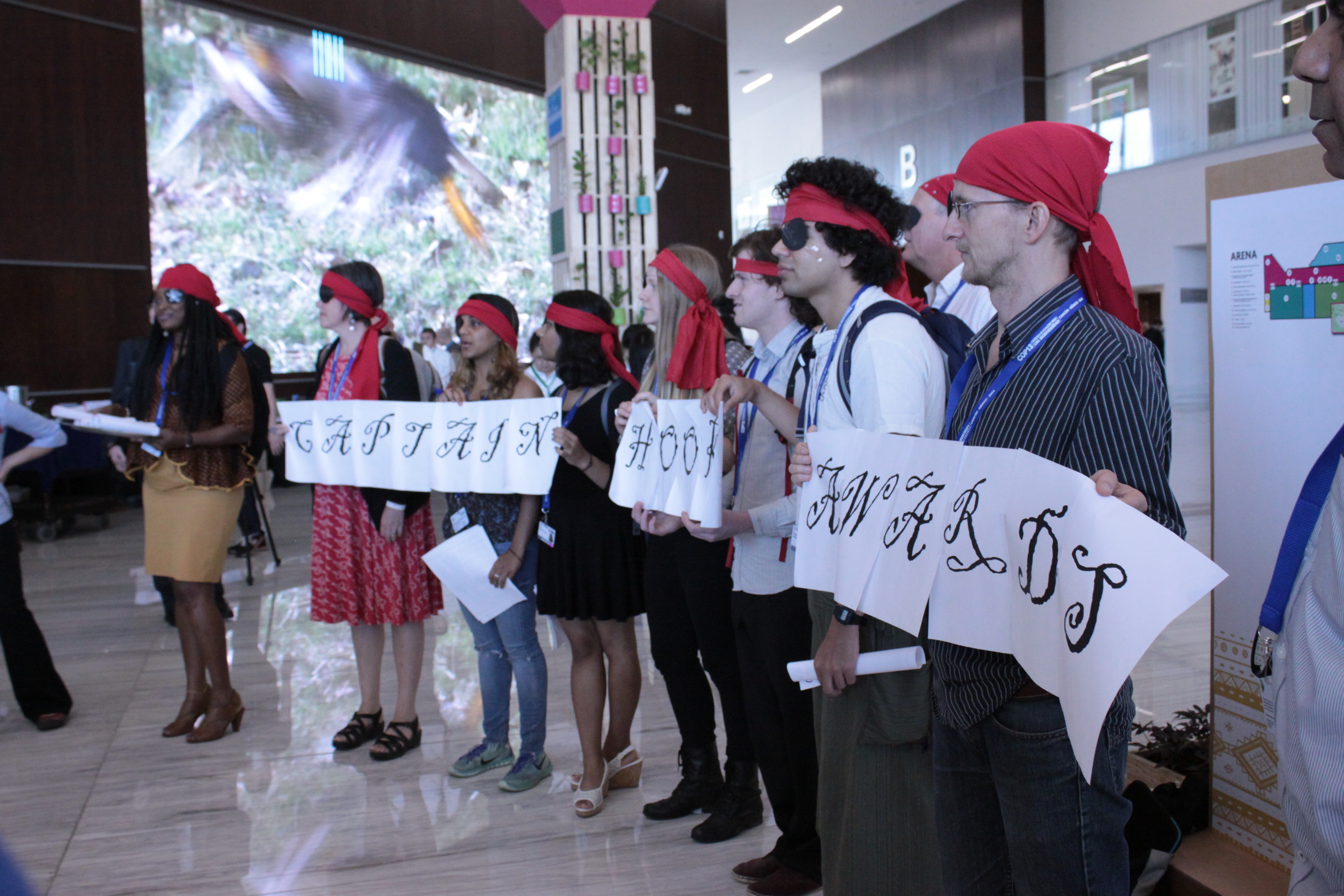 “Pirates” attending the 2016 Captain Hook Biopiracy Awards in the arena of the COP13 Convention on Biological Diversity negotiations.

The Coalition Against Biopiracy (CAB) hosted the 6th Captain Hook Awards for Biopiracy ceremony this  afternoon in the main arena of the COP13 conference, followed by a press conference. In this ceremony and action tradition at CBD negotiations, members of CAB and the CBD Alliance, dressed up as Captain Hook, Tinkerbell, and dastardly pirates, announced the awards for the worst biopirates and the accompanying “Cog Awards” to celebrate the resistance to biopiracy.

The Digital Biopiracy award is given to pirates using high tech tools to undercut the rights of indigenous peoples,such as sharing digital genetic sequences of the world’s biodiversity. Divseek, an international digital sequencing organization, won the award. DivSeek is partnered with organizations with many ties to the biotech industry, including organizations researched by AGRA Watch: Iowa State University, Wageningen University and Research Centre, CGIAR, and Cornell University.

First place goes to the government of Canada, for its attempts to delete any reference to digital sequences from the text at COP13, and for investing 30 million dollars into digitizing its collection of biodiversity. The runner up for the prize is the government of Honduras for rigourously defending free and unregulated access to digital genetic sequencing data, and a shameless disregard for benefit-sharing.

Blairo Maggi is a soy plantation farmer and former governor of the state of Mato Grosso in Brazil. Maggi’s ministry has adopted measures that limit Brazil’s commitments in the CBD.

Coca-Cola, and Clarins get to share this award. Coca-Cola is being (dis)honored for massively profiting off of the Stevia in its beverages, while the traditional holders of knowledge about the sweetening properties of Stevia, make very little. Clarins has been patenting African medicinal knowledge of the harungana tree, selling its product for $7000/kilo in the US, while paying $2/kilo to african farmers, all while labeling it as “fair trade”.

The Cog Awards for resistance to Biopiracy:

Awarded for halting thousands of hectares of transgenic soy in their region through an innovative legal strategy: refusing to be “consulted”. The award also included the Agroecology School Educe, the Beekeepers Kabi Habin, and the Seeds Collective Much Kanan.

Awarded for their ruling in favor of a total prohibition on transgenic maize in Mexico, and declaring it a crime against humanity.

Read more about the recipients and why they were awarded here, and check out our treasure chest of pirate photos here!

The Gates Foundation as an informal recipient

AGRA Watch informally included the Bill and Melinda Gates Foundation for the Two Faces Award at the COP13. The Gates Foundation heavily promotes its own philanthropic image, and the use of “sustainable agriculture”, in the condescending notion of “saving African agriculture from itself”. In reality it exists in a codependent relationship with multinational seed and chemical companies such as Monsanto, Bayer, Dow Chemical, and Syngenta (even owning Monsanto stock for a period). The Gates Foundation promotes the same industrial model of agriculture for developing countries which has already done irreparable damage to the environment in the US, and is wholly unsustainable.

This year’s biopiracy award comes at a timely moment, as we expose the biotech agenda of the Gates Foundation in our side event this evening, entitled “Biodiversity Under Threat: the Gates Foundation, Philanthrocapitalism, and the Capture of African Agricultural Biodiversity”. We will co-present with Mariam Mayet, African Centre for Biodiversity, Angelika witb ENSSER (European Network of Scientists for Social and Environmental Responsibility), and Daniel Maingi, with Kenya Food Rights Alliance.

The side-event description: “In recent years there has been a marked increase in the influence of private philanthropic actors in agricultural development programs across the Global South and specifically in Africa. The Bill & Melinda Gates Foundation, with resources that dwarf most countries’ economies, is of major concern, in particular due to their agricultural programs’ threats to biodiversity. With its corporate partners, the Gates Foundation is pushing a neoliberal, chemically-intensive, “high-tech” agenda for agricultural development – one that has been described by practitioners as “philanthrocapitalism.”  However, critics have noted that–in addition to issues of food sovereignty and indigenous/communitarian rights–this agenda poses a fundamental threat to the biodiversity of both local agricultural varieties as well as the natural environment.  This side-event will provide a status update on this contentious topic.  Presentations will include:  a review of the definition and characteristics of philanthrocapitalism; a discussion of the Gates Foundation and the issues of transparency and accountability posed by a non-state actor of this scale; and case studies of problematic Gates Foundation projects in Africa, such as  WEMA (Water-Efficient Maize for Africa) and the N2Africa program’s threat to legumes.”

We look forward to blogging about the side report soon!